When Norma Palacios went recently to see Roma, the new historical drama from Mexican director Alfonso Cuaron that’s tipped for a best-picture nomination at the Oscars, she saw a deeply familiar story unfold on screen.

The film is set in the 1970s, but the grim working conditions encountered by the lead character, a nanny and maid, are still the reality for many women in Mexico today, said Ms. Palacios, the head of Mexico’s National Union of Domestic Workers. “It’s beautifully depicted in the film, our reality, so much wealth right beside so much poverty.”

Roma is the story of Cleo, a young Mixteca Indigenous woman from the state of Oaxaca in the south who works relentless hours for an aspiring middle-class family living in the gracious Mexico City neighbourhood of Roma. Mr. Cuaron has said the film is autobiographical, and that the character of Cleo is based on Liboria Rodriguez, the woman who raised him.

Review: Alfonso Cuaron’s masterful and sublime Roma is a cinematic experience that transcends the medium

Cleo’s experience offers a lens into the lives of generations of Mexican women, who have emigrated from poor areas of the country to the big cities to be domestic workers. Because they often depend on their employers for housing, they are particularly vulnerable to exploitation and abuse. Ms. Palacios noted that, at present, they have no maternity leave or retirement fund, up to 12-hour work days, no set holidays and no access to the health benefits, subsidized daycare or housing loan credit available to other kinds of workers through the social-security scheme. There are an estimated 2.5 million women doing domestic work in the country today.

Roma won the Gold Lion at the Venice Film Festival, and Mr. Cuaron the prize of best director at Cannes, among myriad other international awards. And while it feels as if people are discussing the success of his slow-moving, black-and-white film in every cantina, Ms. Palacios said, they’re not talking enough about Cleo and the many Mexican women who work in identical conditions today. “It’s something people don’t want to see, it’s everywhere and invisible,” she said.

But the movie’s release comes just as she and her colleagues (12 per cent of all employed women in the country are domestic workers) are on the precipice of a potential landmark improvement in their working conditions.

On Dec. 7, the Mexican supreme court ruled that it is discriminatory that current labour law does not qualify domestic workers for the national workers' health-insurance scheme, and gave the Mexican Institute of Social Security (IMSS, in its Spanish acronym) six months to make a plan to include them. The case was brought by a woman who was a domestic worker for 50 years but had no coverage in the scheme. The court noted that since nine out of 10 domestic workers are women, it amounted to gender discrimination to leave them out.

Writing what she called “probably the first-ever column in a national newspaper by a domestic worker,” in El Universal last week, the maid-turned-activist Marcelina Bautista said that a third of domestic workers earned less than the national minimum wage of 88 pesos – or $5.75 – a day, last year. “In 22 years of raising other people’s children, some families treated me well and some didn’t,” wrote Ms. Bautista, who is also a Mixteca woman from Oaxaca. “What never changed was my lack of rights: nowhere was I treated like a worker, afforded the rights that any other worker has under the law.”

She, too, felt Roma was beautiful, but she hopes it will prompt Mexicans to reflect on Cleo’s economic reality. “We need much more than sentimentality and nostalgia,” she said.

Frustration with Mexico’s tenacious economic inequality helped to propel the leftist Andres Manuel Lopez Obrador to the presidency; he was sworn in on Dec. 1 and on Saturday is expected to unveil his first budget, which he promises will redirect substantial resources toward the development of marginalized communities such as that which Cleo – and Ms. Bautista – come from.

Earlier this month, federal Congress members began to debate a reform that would extend all labour protections to domestic workers – including mandatory holidays and severance pay, and an eight-hour work day, the same as all other workers, rather than the current 12. The proposal is supported by all parties and is expected to become law next year.

Alberto Diaz-Cayeros, who heads the Center for Latin American Studies at Stanford University and studies poverty, inequality and social class in Mexico City, where he grew up, said the proposed legislative changes would be a significant step forward for formalizing domestic work. But he worries that given that labour-law enforcement is already weak in Mexico, the women who will remain largely invisible behind closed doors will continue to be vulnerable to employers who often view them as lucky just to have the job.

He observed that it’s still common to hear domestic workers referred to as criadas – a word that essentially means slave who was raised in the household – or muchachas, the all-purpose generic word for a young female that is synonymous with maid. And even the modest apartments in Mexico City and other cities continue to be constructed with a separate bedroom and bathroom for a live-in domestic worker, he said.

“Roma is told from the child’s perspective, and it’s not a social critique,” he said. “I’m not sure it can be enough to start a debate about inclusion of Indigenous and domestic workers.” 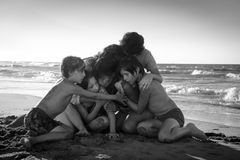