The bulky pyramids and temples of Tenochtitlan, the capital of the Aztec Empire, have risen again in Mexico City, and Hernan Cortes, the man who drove the Spanish colonization of Mesoamerica, once more strides across the airy plazas, determined to confront the great emperor Moctezuma.

But this time, the capital city is built of plywood and paint rather than stone and adobe, and Cortes pauses between his bold declarations of conquest to have his chiselled cheekbones blotted with powder.

Cortes, a wildly ambitious man who built a complex system of alliances to take control of what today is Mexico, is getting the prime-time treatment in an eight-part series breaking new ground in the Mexican entertainment industry. With a budget of more than $1.3-million an episode, extremely high for the regional production market, and a head-on engagement with an issue that Mexicans generally avoid discussing, the producers of Hernan are aiming to generate both controversy and big profits.

“This is a delicate subject between Spain and Mexico – it is delicate and painful especially for Mexico,” said Fidela Navarro, chief executive of Dopamine, the production house behind Hernan, which will air on Amazon Prime, the History Channel and other broadcast platforms in Spain and across Latin America, beginning in November. Ms. Navarro – who is Spanish but has lived in Mexico City for 17 years – calls Cortes “a disruptor, an entrepreneur, a visionary,” but says the series “does not judge him – we leave that for the audience.”

The question of how, or even whether, to judge Cortes is the topic of newly intensified debate in Mexico. In March, 500 years after the day the Spaniard sailed into the port of Veracruz seeking territory to claim for the Spanish crown and converts for the Roman Catholic church, Mexican President Andres Manuel Lopez Obrador sent letters asking Spain’s King Felipe and the Vatican to apologize for the “violent and painful” events that ensued once Cortes stepped off his ship. (An estimated eight million Indigenous people were killed during the colonization by the Spanish – some in battles and slave labour, some by diseases such as smallpox.)

“This wasn’t simply the encounter of two cultures,” Mr. Lopez Obrador said when he made the request public. “It was an invasion. Thousands of people were murdered during that period. One culture, one civilization, was imposed upon another. … The Catholic churches were built on top of the ancient, pre-Hispanic temples.”

Spain’s government rejected the apology request; left-wing officials said today’s government could not speak for the actions of one that ruled half a millennium earlier, while right-wing legislators said that, far from owing an apology, Spain has much to celebrate in the knowledge and culture it spread to a less-developed land. Vatican officials, meanwhile, said Pope Francis already apologized for abuses committed in the name of the church during colonization, during a visit to Bolivia in 2015.

But Spain was not the only source of criticism of the President’s request. Here in Mexico, opinion pages and talk shows filled with critical assessments of the apology demand, most of them accusing Mr. Lopez Obrador, who has a passionate interest in history, of focusing on events 500 years ago in an effort to distract from the economic and insecurity problems his government faces today.

Mr. Lopez Obrador, a leftist who was elected on a platform of poverty reduction and social inclusion, promised a change in the Mexican state’s relationship with its Indigenous people, 72 per cent of whom live below the poverty line.

But Atziri Avila, an activist for Indigenous rights, said there is hypocrisy in his focus on Spanish abuses, given that he is pushing ahead without consultation on infrastructure megaprojects that Indigenous people oppose. They include a rail line that Mayan people say will be disastrous for their territory in one of Mexico’s most biodiverse areas, and hydroelectric dams and wind farms that affect Indigenous communities in the south of the country. The apology request, however, has merit, she says.

“The facts are undeniable: The invasion, the extermination, the killings are undeniable … so I see it as a missed opportunity, to be able to walk together as states, as governments, as two countries that also have undeniable ties, in order to reach a reconciliation together, with a symbolic act," said Ms. Avila, co-ordinator of the Network of Human Rights Defenders. “We can say, ’500 years have passed, these [Spanish] are not the ones who executed people, who made decisions at the time’ – but the request was to recognize that these events happened and had a negative impact on the people of those times and they continue to have impacts such as discrimination.”

Jorge Pedro Uribe, a writer who focuses on Mexican history, says the request for an apology is the product of a global fashion for such declarations, and a misplaced critical view of the conquest. Indigenous people routinely conquered each other – for example, Moctezuma built his empire by conquering and enslaving other peoples, he said. “Don’t make the mistake of judging the past – it doesn’t serve to be judged, only to be understood – judging only takes us backwards,” he said.

It also ignores historical reality since Cortes landed. “It’s the Mexican government, the postrevolutionary government, they are the ones who have maltreated the Indigenous. … Forget the crown, the Pope, the President," Mr. Uribe said. "And more than apologize, take action – what are we doing … to ask pardon, to make reparations? It’s easier to ask for an apology than to look at yourself in the mirror.”

U.S. film director and producer Steven Spielberg’s company, Amblin Entertainment, is also working on a television series about the conquest to be distributed on Amazon Prime’s streaming service; the Spanish actor Javier Bardem will play Cortes in that one, which appears to give equal weight to the role of the Mexican king who was ultimately defeated.

But Ms. Navarro said she and her team – which is about half-and-half Spanish and Mexican – were always clear on the fact that Cortes must be the centre of their series. “Cortes is the one who tells you about who we are now," she said. “He changed history.”

Mexico’s President urges Trump to back down from tariff threat, calls on country to unite
Subscriber content
May 31, 2019 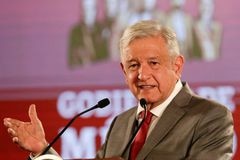 Opinion
The market believes Trump’s Mexican tariffs are a bluff — but their consequences could be dire
Subscriber content
June 6, 2019 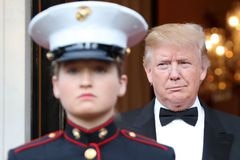 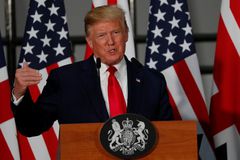