Representatives of Pfizer met privately with senior U.S. scientists and regulators Monday to press their case for swift authorization of coronavirus booster vaccines, amid growing public confusion about whether they will be needed and pushback from federal health officials who say the extra doses are not necessary now.

The high-level online meeting, which lasted an hour and involved Pfizer’s chief scientific officer briefing virtually every top doctor in the federal government, came on the same day Israel started administering third doses of the Pfizer-BioNTech vaccine to heart transplant patients and others with compromised immune systems. Officials said after the meeting that more data – and possibly several more months – would be needed before regulators could determine whether booster shots were necessary.

The twin developments underscored the intensifying debate about whether booster shots are needed in the United States, at what point and for whom. Many American experts, including Dr. Anthony Fauci, President Joe Biden’s chief medical adviser for the pandemic, have said there is insufficient evidence yet that boosters are necessary. Some, though, say Israel’s move may foreshadow a government decision to at least recommend them for the vulnerable.

Pfizer is gathering information on antibody responses in those who receive a third dose, as well as data from Israel, and expects to submit at least some of that to the Food and Drug Administration in the coming weeks in a formal request to broaden the emergency authorization for its coronavirus vaccine.

But the final decision on booster shots, several officials said after the meeting, will also depend on real-world information gathered by the Centers for Disease Control and Prevention about breakthrough infections – those occurring in vaccinated people – that cause serious disease or hospitalization.

And any recommendations about booster shots are likely to be calibrated, even within age groups, officials said. For example, if booster shots are recommended, they might go first to nursing home residents who received their vaccines in late 2020 or early 2021, while elderly people who received their first shots in the spring might have a longer wait. And then there is the question of what kind of booster: a third dose of the original vaccine, or perhaps a shot tailored to the highly infectious delta variant, which is surging in the United States.

“It was an interesting meeting. They shared their data. There wasn’t anything resembling a decision,” Fauci said in a brief interview Monday evening, adding, “This is just one piece of a much bigger puzzle, and it’s one part of the data, so there isn’t a question of a convincing case one way or the other.”

Amy Rose, a Pfizer spokesperson, said in a statement, “We had a productive meeting with U.S. public health officials on the elements of our research program and the preliminary booster data.”

The Department of Health and Human Services, which convened the meeting, issued its own statement reiterating the administration’s stance. “At this time, fully vaccinated Americans do not need a booster shot,” it said.

With less than half of the United States population fully vaccinated, some experts said Monday that the country needed to remain focused on getting all Americans their first dose. The FDA’s most important task, they said, is to increase public confidence by granting full approval to the coronavirus vaccines in use, which for now are authorized on an emergency basis.

“At this point, the most important booster we need is to get people vaccinated,” said Dr. Carlos del Rio, an infectious disease expert at Emory University in Atlanta. The booster doses in Israel, he added, “will help us answer some questions, but at the end of the day I don’t agree with what they’re doing. I think it’s awfully premature.”

Within the Biden administration, some fear that if Americans are convinced that coronavirus vaccines provide only short-lived immunity before requiring a booster, they will be less likely to accept a shot. But those concerns could fall by the wayside if new data from Israel, expected in the next several weeks, shows conclusively that immunity wanes after six to eight months, significantly raising the risks for the elderly or other vulnerable populations.

The administration convened Monday’s session in response to last week’s announcement by Pfizer and its German partner, BioNTech, that they were developing a version of their vaccine that targets the delta variant, and reporting promising results from studies of people who received a third dose of the original vaccine six months after the second.

The new data is not yet published or peer reviewed, but when the companies announced that they would submit data to the FDA for authorization of booster shots, it caught the Biden White House by surprise.

In an unusual joint statement Thursday evening, hours after the Pfizer-BioNTech announcement, the FDA and the CDC pushed back.

“Americans who have been fully vaccinated do not need a booster shot at this time,” the statement said, adding, “We are prepared for booster doses if and when the science demonstrates that they are needed.”

The move may make good business sense for Pfizer-BioNTech. Since the onset of the pandemic, the partner companies have pursued a “get to market first” strategy in manufacturing and marketing their vaccine.

The strategy has “paid off as handsomely as anyone could ask for,” said Steve Brozak, president of WBB Securities, a research investment bank focused on biotechnology.

Last week, Pfizer and BioNTech said a booster given six months after the second dose of the vaccine increased the potency of antibodies against the original virus and the beta variant by five- to tenfold. But antibody levels may not be the best biological measurement of the need for booster doses, according to experts, who say it is no surprise that antibodies would increase after taking a third dose.

“Antibody response is not the only measure of immune protection,” said Dr. Leana S. Wen, a former health commissioner for Baltimore. “There have been multiple studies that suggest these vaccines also stimulate B cell and T cell immunity, so even if there isn’t as much antibody, that doesn’t mean someone isn’t protected.”

In Israel, the government agreed to provide Pfizer with data on its vaccine recipients, and Pfizer has been matching the Israeli data with its own laboratory tests on antibody responses. Some people familiar with the data say that taken together, the two data sets indicate that immunity is waning among the vaccinated after roughly six to eight months, leading to a growing number of breakthrough infections.

Del Rio of Emory University complained about Monday’s meeting being conducted in private instead of Pfizer presenting its data publicly to the CDC’s advisory committee on vaccine practices, which will ultimately recommend whether booster shots are necessary.

Slightly more than two-thirds of American adults – 67.7% – have had at least one COVID-19 shot, according to the CDC. That figure falls short of the Biden administration’s goals; the president had hoped to have 70% of adults at least partially vaccinated by July 4.

Still, the national vaccination campaign has made clear that the vaccine succeeds at preventing disease, and studies suggest that vaccines remain effective against the delta variant. Outbreaks are occurring in areas with low rates of vaccination, and the national caseload has ticked up recently; according to a New York Times database.

World Health Organization officials emphasized Monday the importance of prioritizing global vaccine production and distribution over the development of boosters in light of the stark gaps among countries’ vaccination programs.

“It’s not to say one or the other; it’s putting things in a crisis in order,” said Dr. Michael Ryan, executive director of the organization’s health emergencies program, in reference to addressing what the organization calls a two-tier pandemic. 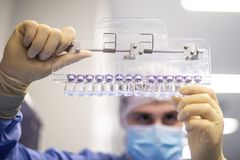 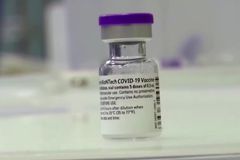 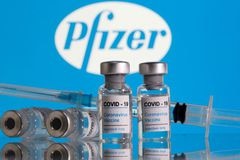