Most of the 39 people found dead in a trailer truck near London last week are believed to have come from two impoverished provinces in Vietnam where human smuggling is rampant.

So far, 10 people have been reported missing from Ha Tinh province and another 14 from neighbouring Nghe An province. Both are located in north-central Vietnam and they are considered among the most at-risk parts of the country for human smuggling and trafficking.

Police in Vietnam took hair and blood samples to get DNA from the relatives of those who are missing, family members told reporters on Sunday.

Many of those missing are like 19-year-old Bui Thi Nhung, who left her home in Nghe An in August in the hope of finding work in a nail salon in Britain. She made her way through China, Germany and then Belgium, where she is believed to have boarded the trailer bound for London. “I just want a peaceful life,” she posted on Facebook after leaving home.

Her uncle Hoang Binh told Reuters: “Nhung didn’t have the qualifications to get a good job with handsome pay. Nor do her friends and many others here. … Going abroad and sending back money was the only choice,” he added.

"The whole district is covered in sorrow,” Rev. Anthony Dang Huu Nam, a Catholic priest in the town of Yen Thanh in Nghe An, told reporters after he held a service on Saturday for the victims. "This is a catastrophe for our community.” Father Anthony said he believes the 39 stowaways were part of a group of 100 people from the region who had left to find a new life abroad.

The trailer truck was found just before 2 a.m. on Wednesday morning in an industrial park in Grays, east of London. The trailer had arrived at the Purfleet container port from Zeebrugge, Belgium, at around 12:30 a.m. It left Zeebrugge some time late Tuesday, but it’s not clear when the people were loaded inside. The trailer was picked up at Purfleet by Maurice Robinson, a 25-year-old truck driver from Northern Ireland who has been charged with 39 counts of manslaughter and conspiracy to traffic people. Three others from England and Northern Ireland have been released on bail.

Essex Police said they haven’t identified the bodies and they were using dental records, fingerprints, DNA and cellphone data to determine the nationalities. Investigators initially said the victims had all come from China, but they were now “open-minded as to the nationalities.”

Photographs and personal details of potential victims have been pouring in from families in Vietnam and Vietnamese living Britain. VietHome, a group for Vietnamese nationals in Britain, said on Saturday that it had given police pictures of 20 people, and, on Sunday, Vietnam’s VnExpress news service said 24 families in Nghe An and Ha Tinh have reported missing relatives.

Michael Brosowski, the founder of the Blue Dragon Children’s Foundation, which works with at-risk children in Vietnam, said that while the country has prospered in recent decades, there is vast inequality especially in rural areas. “Vietnamese people are ambitious people, they want to get ahead and that creates this vulnerability that traffickers and people smugglers can step into,” he said in an interview on Sunday. “They come along and say you don’t have to be poor. Come with me. What could go wrong?”

A report in March by the Pacific Links Foundation, an American charity that works with families in Vietnam, said that in the past decade more than 3,000 Vietnamese women and children have been reported as victims of trafficking in Britain. It added that the Vietnamese consistently ranked among the top three nationalities in Britain that are victims of trafficking. Most are forced to work in nail salons and cannabis farms, the report said. And it found that the provinces of Nghe An and Ha Tinh “continue to supply the bulk of overseas labour, legal or otherwise, with Nghe An ranking number one.”

Human smuggling usually involves people paying someone to help them enter a country illegally whereas trafficking is associated with transporting people for exploitation, such as for sexual exploitation or forced labour. However, the foundation said that people who are smuggled into a country often end up in forced labour as a way of paying their fee. Families in Nghe An have said their relatives paid up to $50,000 to smugglers.

Nguyen Dinh Tu was one of them. He had been working illegally in Romania and Germany before he recently paid $18,000 to a smuggler to get into Britain. His wife, Hoang Thi Thuong, helped gather the money and she hasn’t heard from him since Tuesday. "I have a big debt to pay, no hope and no energy to do anything,” she told Reuters.

More Vietnamese fear relatives are among 39 found dead in truck in England
October 26, 2019 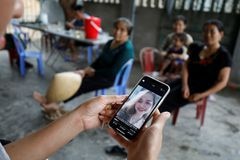