With a handshake and a hug, Mozambique’s leaders hoped on Tuesday to close the book on a decades-long conflict. But an election in October and new causes of violence mean lasting peace is far from assured.

After fighting on opposite sides of a civil war that erupted following independence from Portugal and killed more than one million people between 1977 and 1992, the ruling Frelimo party and former guerrilla movement Renamo signed a ceasefire that ended the worst of the bloodshed.

However, violence has flared periodically in the years since, especially around elections.

President Filipe Nyusi and Renamo leader Ossufo Momade smiled broadly and embraced after signing the deal, which encompasses a permanent end to hostilities and constitutional changes, as well as the disarming and reintegration of Renamo fighters into the security forces or civilian life.

“With this agreement we are saying that we may disagree, but we always use dialogue to settle our differences,” Nyusi said at an event in Maputo’s Praça da Paz (Peace Square), in front of dignitaries including South Africa’s Cyril Ramaphosa and presidents of other neighbouring states.

“Never again should election results dictate the state of peace in Mozambique.”

Analysts say the new accord offers the best hope yet for a lasting solution to the conflict.

“All of us have to be optimistic, because if nobody believes in peace, there will be no peace,” said Felipe Donoso, head of mission for the International Committee of the Red Cross in Mozambique.

Nyusi and Momade both hope the deal will score them political points ahead of presidential, parliamentary and provincial elections on Oct. 15.

The poll could make or break the agreement, experts said. It will be the first time Renamo, now the country’s main opposition party, can compete for provincial governorships, satisfying demands for political inclusion and control over areas they dominate.

The governorships offer a chance for Renamo to demonstrate it is a functioning political party with the capacity to govern effectively, said Edward Hobey-Hamsher, senior Africa analyst at British-based risk consultancy Verisk Maplecroft.

He and other experts interviewed by Reuters cited this as a main reason the agreement might succeed where its predecessors had failed.

However, if Renamo does not achieve its election goals of winning governorships and feels cheated by Frelimo, the accord could quickly come undone.

“Then the whole thing will collapse,” said Joseph Hanlon, a visiting professor at the London School of Economics.

Already, there have been accusations of voter registration fraud.

Renamo’s Momade said at the ceremony that the deal sealed a future of peace and reconciliation, but noted that changes in government through free and fair elections should be the rule rather than the exception.

“We have just opened a new page in the history of our country,” he said.

The disarmament process will be far from complete by the time of the election. So far about 50 out of more than 5,000 Renamo fighters have been registered, a process that started last week in Gorongosa, where Renamo’s headquarters are located.

But only a handful of guns were handed over and Renamo will likely hang onto its heavier and better weapons, at least until after the poll, and could sell some them to other groups, analysts said.

Both Frelimo and Renamo contain groups of hardliners unenthusiastic about the process. A Renamo general and an uncertain number of other fighters have in recent weeks disavowed Momade, threatening violence and refusing to give up their weapons while he remains in charge.

“They are now completely outside of the peace agreement,” said Johanna Nilsson, a Sweden-based academic. “The fact Renamo cannot control them is of course problematic.”

The split between Renamo and Frelimo has defined Mozambique since the 1970s, when the country was a front in the Cold War.

But while a lasting peace deal has been a long time in the making, analysts say the rivalry between the former foes is no longer the primary conflict threatening the country.

An Islamist insurgency in the impoverished north is stretching the government’s military resources and increasing the imperative for an accord with Renamo.

Since 2017, Islamist attacks have killed more than 250 people. The roots of that crisis could hold lessons for the government as it attempts to deal with Renamo.

Located on Southern Africa’s Indian Ocean coast, Mozambique is one of the world’s least-developed nations, but is starting to tap huge coal and natural gas deposits.

Residents in the Cabo Delgado region remain mired in poverty, even as a growing number of multinational corporations head there to develop one of the biggest offshore gas finds in a decade – estimated to be worth at least $30 billion.

“Poverty is the fuel of the present violence in northern Mozambique,” said Eleanor Beevor, a research analyst at the London-based International Institute for Strategic Studies.

“The grievances around this inequality could become much worse if ordinary people don’t benefit from the growing oil and gas industries in northern Mozambique.”

A lack of economic opportunities in Renamo’s central heartland could also fuel violence, much as it has in the north, said Adriano Nuvunga, director of the Center for the Study of Democracy and Development (CEDE) in Maputo.

“This peace, it needs to bring benefits,” he told Reuters.

Mirko Manzoni, the United Nations special envoy for Mozambique, who has been closely involved in the negotiations, said most Renamo fighters just want a way to provide a future for their families. 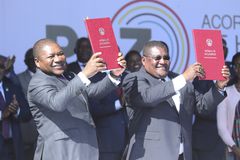