Myanmar, formerly known as Burma, has spiralled back into civil war since the armed forces removed the civilian government in February, 2021. It was the end of a brief stretch of democratic rule, the former British colony's first since a coup led by General Ne Win in 1962.

Citizens from all walks of life – including students, bankers, doctors, police officers, teachers and engineers – have joined a massive countrywide protest that has collapsed Myanmar's public institutions and strained its economy to the breaking point. Many have joined the shadow National Unity Government (NUG); thousands more have joined civilian militias and other ethnic armed groups.

In the face of widespread opposition, the junta, led by ethnic-majority Burmans, has responded brutally and indiscriminately against the civilian population. As the war approaches its second year, thousands – including close to 200 children – have been killed, and the United Nations estimates the conflict has displaced one million people. Since this August alone, more than 16,000 have fled their homes to escape the violence. The UN estimates that by next year, there could be nearly 1.4 million displaced people in need of protection and humanitarian aid. 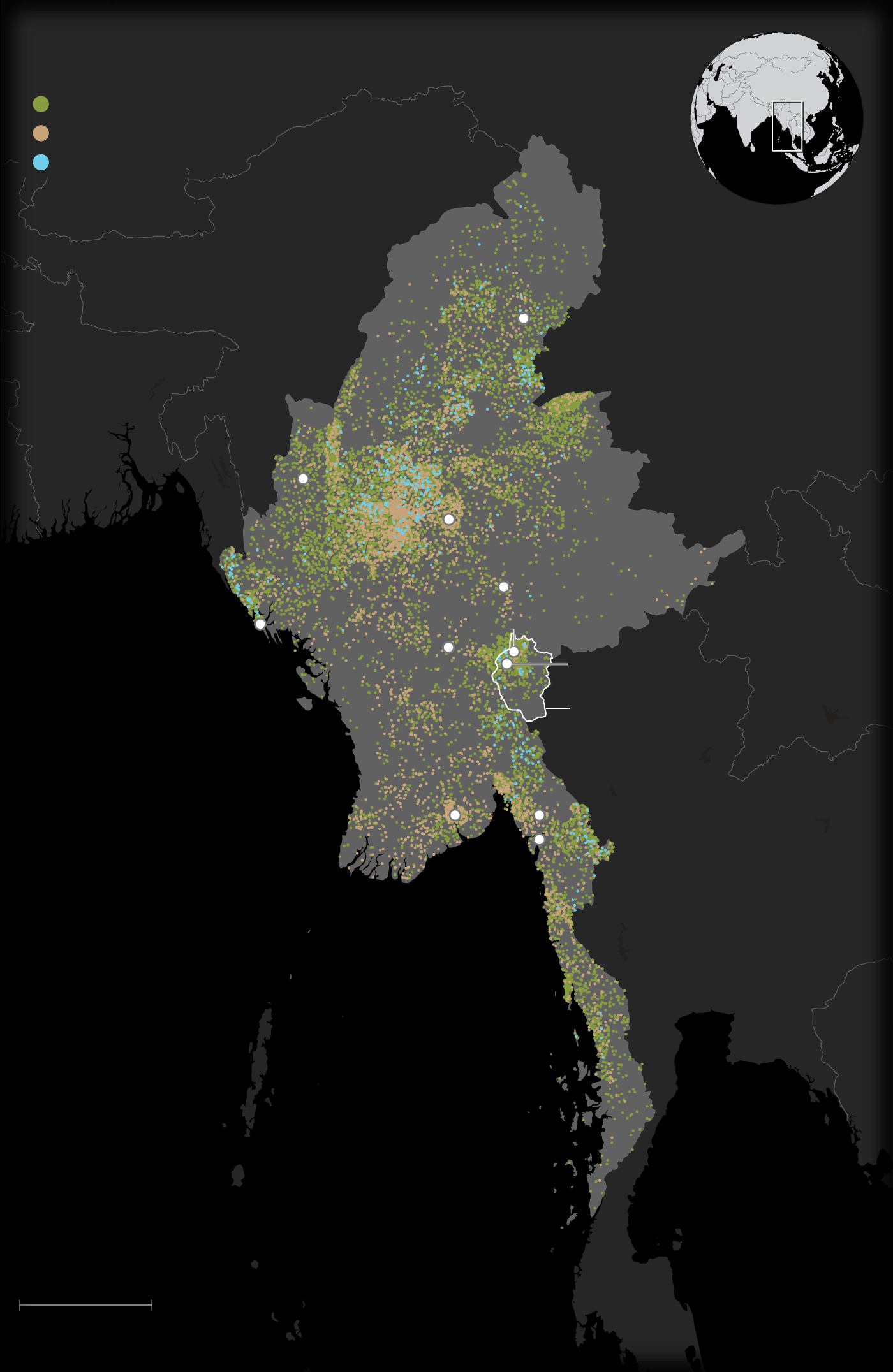 The past couple of months have been the deadliest since the start of the conflict, with the Tatmadaw, as the military force calls itself, stepping up aerial attacks across the country using Russian-supplied fighter jets and attack helicopters, according to Amnesty International and Human Rights Watch.

In September, helicopters opened fire on a school in the central Sagaing region, killing at least 11 children. And in late October, military jets targeted an outdoor concert in northern Kachin state, killing as many as 80 and wounding hundreds.

I've seen the ravages of this war up close, most recently during a seven-week stay that began this past September, during the heat, humidity and rains of Myanmar's monsoon season. I crossed the border from Thailand and met soldiers from the Karenni Army, who come from eastern Myanmar, in Kayah State. (Kayah was known as Karenni until the junta renamed Burma and its various states in the 1980s; for many who oppose the military's rule, the old names stand as the legitimate ones.) The Karenni are a predominantly Catholic minority who've been fighting for self-determination since Myanmar won independence in 1948. Now, they're battling alongside the Karenni Nationalities Defence Force and other militia groups to return it to democratic rule.

We walked for several hours through thick jungle and hilly terrain to a Karenni Army settlement and camp for internally displaced people that houses roughly 250 families. From there, we travelled to the army's main military base in Myanmar, where a unit of soldiers spent 10 days organizing the logistics of escorting not just me, but various local politicians, volunteer teachers and other civilians to the town of Demoso, near the front line of the fighting.

Some 150 of us departed before dawn on Sept. 27, embarking on a four-day march that would take us through water and over mountain ranges, with soldiers carrying ammunition and weapons for their compatriots on the front.

Most of the recruits are citizens who've fled their homes and want to help defend their country. Before the coup, Su Mya was a police officer. But when the uprising began in early 2021, the 34-year-old joined up.

"I saw the military doing horrible things," she says. "I saw the burning of villages and the killing of civilians. My home was burnt to the ground. My entire village was burned down." She left behind her loved ones and all her possessions – a sacrifice she was more than willing to make.

Two days into the punishing four-day journey through the jungle, the militia arrives at the Salween River, which flows 3,300 kilometres south from the Tibetan Plateau to the Andaman Sea.
Joy (pictured during a break in the journey to Demoso) left behind her family in Yangon (Rangoon) to join the civil disobedience movement. Her job is to create a new education system based on the Karenni language, rather than the official Burmese imposed by the ruling military. She's also finishing an online degree, and since the junta disconnected most communication networks, each afternoon she climbs up a hill with her mobile phone to catch a weak network signal that allows her to get online.
"Children need to be educated in this revolution," says Joy. "A lot of the teachers left because of the war. We have little human resources, but we will not give up. We are strong, because we are united against our enemy."
This village in Karenni has been bombed three times in the past year. So local children aren't just learning reading, writing and arithmetic. They do regular emergency drills in case of an attack by government forces.
During the drills, they're instructed to run and hide in their school's bomb shelter. The UN estimates nearly 200 children have been killed since the coup in February, 2021.
These men – suspected of being collaborators with the military junta – are being held in a police station in Karenni state, which is under the control of the shadow National Unity Government.

Karenni soldiers wash in a stream during a break from their punishing march to the front line near the town of Demoso, where they'll resupply their comrades with fresh weapons, ammunition and other provisions. They've just crossed the mighty Salween River and are gearing up for the final 1,000-metre climb into the mountains and down to the fertile plains of central Karenni state, where most of the fighting is taking place.
The militias' arsenal is a cobbled-together mix of black-market rifles, MA-1 assault weapons taken from Tatmadaw forces on the battlefield, mortars, rocket launchers and rifle-propelled grenades, like the one being test-fired by a Karenni soldier.
Ammunition is phenomenally expensive – roughly US$3 a bullet – and hard to come by. "Instead of buying bullets to fight, we have to buy food to feed the civilian population fleeing from cities," says one Karenni Army commander. "It is our responsibility to take care of displaced civilians, but we lack the resources." Nothing goes to waste – soldiers sort through bullets for a variety of weapons to distribute to militias on the front line.
The soldiers carry the bare essentials in small waterproof backpacks, including a blanket, a hammock, utensils, a metal container for cooking, and maybe some chilies and small dried sardines, which are light to carry and pack lots of energy. Mealtimes consist of rice, soup and plants collected during the day's march, including bamboo and banana hearts. The jungle also provides birds, squirrels and other small mammals, hunted along the way.
The people of Karenni state are predominantly Catholic and have been fighting for self-determination since Burma won independence from the British in 1948.
A steady stream of recruits undergo three months of training at one of the Karenni Army’s main bases close to the border with Thailand. “One night the army came for me,” says Hsaw Reh, a young soldier from Shan State. “I was not at home, so they arrested my father. I was forced to flee and decided to join the People’s Defence Forces, train to hold a gun and fight the junta. When my father got out of prison, he told me to fight – to fight them to the end.”
Karenni commanders coordinate operations on the ground, rallying the many small armed groups that have popped up since the uprising. They might not be well-equipped, but they’re dedicated.

According to the United Nations Human Rights Council, at least 2,300 people have been killed in the conflict so far. This People's Defence Force fighter was killed by a 120mm mortar shell while trying to attack a Tatmadaw base on the outskirts of the town of Demoso. The Karenni soldier left behind his wife and five children.
With the use of anti-personnel landmines banned since 1997, it's a flagrant breach of international law that the Tatmadaw have placed mines on a massive scale in and around towns, villages, rice paddies and urban areas in Karenni. They've killed and wounded countless soldiers and civilians, and will make it impossible for thousands of internally displaced people to return home. Many victims of landmine explosions end up at this rehabilitation centre, built in a secret location for fear of air strikes by Tatmadaw forces. "We have to be very careful not to give away the location of our clinics," says one doctor. "The Tatmadaw knows that bombing medical facilities will pressure armed groups on the front line."
A few kilometres from the rehab centre is Karenni state's largest field hospital, which cares for both soldiers and civilians who've been injured by landmines and indiscriminate mortar shelling by armed forces. Many of the patients have lost limbs – often the lower part of legs and feet.
This mother of three lost her leg in a landmine explosion as she walked home after harvesting rice in the paddies.

Rice is a staple of the diet here, and to help stave off a food crisis, the fighting was scaled down so displaced people could return to their fields to harvest it for the months to come.
"Without rice, our people starve. Without rice, our soldiers will have nothing to eat next year, and they will not be able to fight this war," says a commander in the Karenni Nationalities Defence Force. "So we need to let civilians go to the fields to harvest. If we engage, the Tatmadaw will start shelling civilians indiscriminately."
This Buddhist temple with multiple pagodas sits on the outskirts of the town of Demoso, a region controlled by the Karenni Nationalities Defence Force, the Karenni Army and the People's Defence Forces. Nearly 90 per cent of Myanmar's population are Buddhist, though the people of Karenni are mostly Catholic. 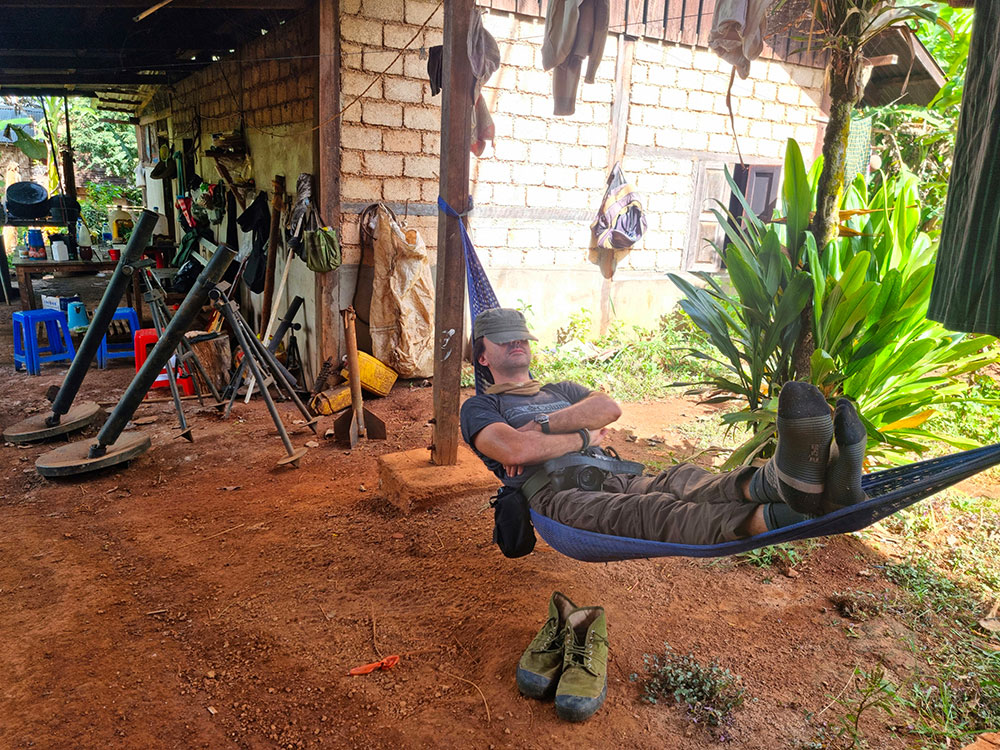 SIEGFRIED MODOLA is an Italian-British photojournalist who was raised in Kenya and now splits his time between Paris and Nairobi. Modola has reported from over a dozen countries in Africa, and has worked in Europe, the Middle East, Asia and South America, focusing on underreported social, humanitarian and geopolitical events. He has covered the civil war in South Sudan, the conflict in Somalia, the Venezuelan refugee crisis, the 2014 Israel-Gaza war, the exodus of Rohingya refugees in Bangladesh, and more.

Opening photo: Karenni soldiers fighting against the Tatmadaw armed forces stand on an outcrop overlooking a valley in Karenni state (which was renamed Kayah by the military junta in the 1980s). It's been a focal point for fighting since the coup in early 2021.