The ruling junta in Myanmar has hired an Israeli-Canadian lobbyist, recently investigated by the RCMP over his activities in Sudan, to help “explain” why the military carried out a coup against the country’s democratically elected government last month.

A March 4 contract seen by The Globe and Mail states that Ari Ben-Menashe and his Montreal-based firm Dickens & Madson (Canada) Inc. have been retained by the junta to lobby the United States and other foreign governments “to assist in explaining the real situation in the country” after the coup. The document was signed by Mr. Ben Menashe and Myanmar’s junta-appointed Defence Minister, General Mya Tun Oo.

Angela Savard, a spokeswoman for Global Affairs Canada, said the department was aware of the deal, and said the contract could be in violation of Canadian law. Gen. Mya Tun Oo is one of nine individuals that Canada targeted with sanctions after the Feb. 1 coup, making it illegal for any Canadian to do any kind of business with him.

“We are aware of reports concerning a Montreal-based company potentially in contravention of the Special Economic Measures (Burma) Regulations,” Ms. Savard said in an e-mailed reply to questions from The Globe. “Contravening Canadian sanctions is a criminal offence. All persons in Canada and Canadians abroad must comply with Canada’s strict sanctions measures.”

Myanmar’s generals seized power three months after an election that saw a military-allied party overwhelmingly defeated by Aung San Suu Kyi and her National League for Democracy. Ms. Suu Kyi and her ally President U Win Myint, who had shared power with the military since 2015, have been held at an undisclosed location since the coup.

The contract says that Mr. Ben-Menashe and his firm had been hired to “lobby the executive and/or legislative branches of the United States, Saudi Arabia, UAE [the United Arab Emirates], Israel, the Russian Federation … as well as the United Nations, African Union and international organizations and NGOs on behalf of the Republic of the Union of Myanmar.” The contract does not specify how much Mr. Ben Menashe and his firm will be paid for their effort.

Mr. Ben-Menashe told The Globe that the contract was a one-year deal to help the junta “get off the sanctions and generally to explain to the world their position.” In a telephone interview, he said the military was “very interested in getting close to the United States government.” In a separate interview with Reuters, he said the military believed Ms. Suu Kyi had been too close to China.

Mr. Ben-Menashe said he does not believe his company is violating sanctions against Myanmar. He said his firm will not be paid for its work for Myanmar until sanctions are lifted.

“Let them leave us alone and let us do our work,” he said of the Canadian government.

A spokesperson at RCMP headquarters in Ottawa confirmed Sunday they were aware of the reports but could not provide information on any investigation.

News of the contract, which was first reported by the Washington-based website foreignlobby.com, drew immediate condemnations from the country’s pro-democracy movement.

“We are appalled that Ari Ben-Menashe has been hired as a lobbyist for the criminal Myanmar military junta. … Ari is not only attempting to whitewash the reputation of these killers but he will be doing so with funds stolen from the people of Myanmar,” said Yadanar Maung, spokesperson for Justice for Myanmar, a group of activists who have organized to oppose the coup.

“We call on the Canadian government to take immediate action against all businesses that have commercial ties to the military.”

Mr. Ben-Menashe, a 69-year-old former Israeli intelligence officer, has repeatedly courted controversy during his long career as a private businessman. He was jailed in the U.S. in 1989 for attempting to sell military aircraft to Iran, but later released because a judge accepted his defence that he had been acting on the instructions of the Israeli government.

He also has a history of working with Myanmar’s generals. The Globe reported in 2003 that Mr. Ben-Menashe had attempted to lobby the Canadian government on behalf of the previous junta that ruled the county until 2015. That year, a new semi-democratic constitution took effect and the country’s first free elections were held. Mr. Ben-Menashe’s more recent clients have included Robert Mugabe’s former regime in Zimbabwe, renegade Libyan general Khalifa Haftar, and the newly installed military government in Sudan.

In 2019, the federal government asked the RCMP to investigate whether Mr. Ben-Menashe’s work in Sudan had violated Canadian sanctions, which prohibit the sale of any kind of weapons to the country. The UN also launched a separate investigation into whether the deployment of 1,000 Sudanese troops – sent to Libya to aid renegade Gen. Haftar’s campaign to capture the capital city of Tripoli – was connected to a US$6-million payment Mr. Ben-Menashe received from Sudan.

Mr. Ben-Menashe told The Globe on Sunday that he had been cleared of any wrongdoing by both the RCMP and the UN investigation.

In his 2020 filings under the U.S. Foreign Agents Registration Act, Mr. Ben-Menashe named the ruling military council in Sudan, the government of Kyrgyzstan, and the United Liberation Movement for West Papua among the current clients of Dickens & Madson.

In Myanmar, there were protests for a 34th consecutive day on Sunday, and the country’s trade unions called for their members to strike and bring the economy to a standstill. “The time to take action in defence of our democracy is now,” the unions said in a joint statement.

Police reportedly used tear gas, stun grenades and live ammunition to break up the demonstrations in different cities. At least 50 people have been killed as the army has repeatedly used force to try and quell the uprising. 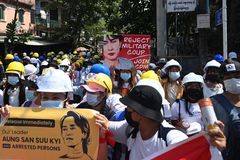 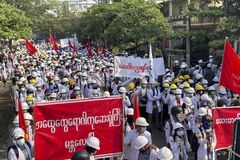 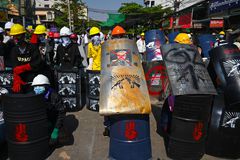