Russia on Friday expelled diplomats from three EU member states it accused of attending illegal protests in support of jailed Kremlin critic Alexey Navalny, and pointedly ignored a public call by the EU’s top diplomat to free the opposition politician.

The expulsions, which affected diplomats from Germany, Poland and Sweden, appear to have wrecked an EU attempt to re-engage with Moscow being spearheaded by Josep Borrell, the EU’s foreign policy chief, who was in Russia for talks on Friday.

German Chancellor Angela Merkel called the move unjustified and a further step away from the rule of law in Russia, while Poland summoned the Russian ambassador over the decision.

Navalny, President Vladimir Putin’s most prominent critic, was jailed this week for almost three years for parole violations he calls trumped up, a move the West condemned.

Lavrov did not respond directly to the appeal but complained about what he described as human rights abuses in the EU and called the 27-nation bloc an unreliable partner.

Borrell had earlier said that the Navalny case was a low point for ties between Russia and the EU. He said there was not yet a formal proposal for new EU sanctions on Russia but that the 27-member bloc would have a discussion next month about relations with Moscow.

“I have conveyed to Minister Lavrov our deep concern and our appeal for his (Navalny’s) release and for the launch of an investigation over his poisoning,” Borrell told the news conference. “Over the last years our relationship has been marked by fundamental differences and a lack of trust.”

Navalny was arrested on Jan. 17 on his return from treatment in Germany, where he was flown in August after falling ill from what German officials concluded was poisoning with a military-grade nerve agent. The Kremlin has questioned whether Navalny was poisoned and denied blame for his illness.

Lavrov said it was up to Brussels if it wanted to impose sanctions on Russia, but that the EU was behaving more and more like Washington in its use of unilateral sanctions.

“We share the view that a further deterioration of ties is fraught with negative and highly unpredictable consequences,” Lavrov said.

A few hours after the talks, Russia announced the expulsion of the diplomats, saying they had taken part in illegal protests last month against Navalny’s jailing. The foreign ministry said Moscow considered their actions unacceptable.

Despite close trade ties and energy interdependence, Russia’s political relations with the European Union soured after Moscow annexed Crimea from Ukraine in 2014.

Navalny was back in court on Friday for another trial, accused of slandering a Second World War veteran who took part in a promotional video backing changes last year that let Putin run for up to two more terms. Navalny at the time described those in the video as traitors and lackeys. He denies the slander charge.

In comments by video link at the trial, the veteran called on Navalny to apologize publicly.

“This case in general was intended as a kind of PR process because the Kremlin needs the headlines: Navalny slandered a veteran,” Navalny told the court. 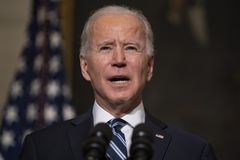 Navalny urges Russians to overcome their fear, free country from ‘thieves’ in message from jail
February 4, 2021 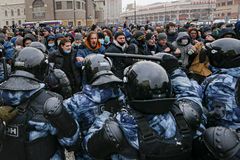 ‘Grandpa in a bunker’: Navalny takes aim at Putin as Moscow court sentences him to more than two years in jail
February 3, 2021 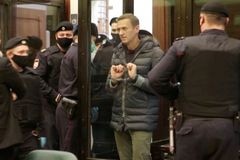