The U.S. State Department urged Pyongyang to refrain from further provocations and said it still hoped for a resumption of the working-level talks stalled since a failed summit in Hanoi in February.

“We want diplomacy to work. We want Chairman Kim to deliver on the promise that he made to President Trump, which was that he would denuclearize,” he said in an interview with Bloomberg television.

South Korea, which had backed efforts by North Korea and the United States to end years of hostility, urged Pyongyang to stop acts unhelpful to easing tension and said the tests posed a military threat.

Seoul’s National Security Council said it believed the missiles were a new type of ballistic missile but it would make a final assessment with the United States.

Ballistic missile tests would be a violation of U.N. Security Council resolutions that ban North Korean use of such technology. North Korea rejects the restriction as an infringement of its right to self-defence.

It launched the missiles from the east coast city of Wonsan with one flying about 267 miles (430 km) and the other 428 miles over the sea. They both reached an altitude of 30 miles, an official at South Korea’s Defense Ministry said.

The launches are a setback for Trump, who has repeatedly lauded North Korea’s freeze in testing of nuclear bombs and long-range missiles since 2017 as he seeks a big foreign policy win while campaigning for re-election in 2020.

Trump sought to play down the May launches, saying he did not consider the testing of short-range missiles “a breach of trust.”

But the latest tests cast fresh doubt on efforts to restart stalled denuclearization talks, which Trump and Kim agreed to in a meeting at the demilitarized zone (DMZ) between the Koreas at the end of June.

Pompeo and North Korean Foreign Minister Ri Yong Ho had been expected to meet on the sidelines of a Southeast Asia security forum in Bangkok next week. But a diplomatic source told Reuters on Thursday that Ri had cancelled his trip to the conference.

U.S. State Department spokeswoman Morgan Ortagus said she had no meetings to announce.

“We urge no more provocations,” she told a regular news briefing when asked about the latest missile tests, adding: “We continue to press and hope for these working-level negotiations to move forward.”

Ortagus stressed that sanctions on North Korea would remain in effect until there was a diplomatic resolution for North Korea to give up its nuclear weapons.

The summit between Trump and Kim in Vietnam in February collapsed after the two sides failed to reconcile differences between U.S. demands for North Korea’s complete denuclearization and North Korean demands for sanctions relief.

Since the DMZ meeting, North Korea accused Washington of breaking a promise by planning to hold joint military exercises with South Korea next month and warned of a possible end to its freeze in nuclear and long-range missile tests.

On Tuesday, Kim inspected a large, newly built submarine from which ballistic missiles could be launched.

Chinese Foreign Ministry spokeswoman Hua Chunying said Beijing had noted the launch, and called for North Korea and the United States to reopen negotiations “as early as possible.”

“By firing missiles, taking issue with military drills and showing a new submarine, the North is sending one clear message: there might be no working-level talks if the United States doesn’t present a more flexible stance,” said Kim Hong-kyun, a former South Korean nuclear envoy.

Kim Dong-yup, a former naval officer who teaches at Seoul’s Kyungnam University said the weapons tested on Thursday appeared to be the same as the ones tested in May, which were less of a challenge than long-range missiles but “enough to subtly pressure” Washington.

But the South Korean military believes they may be new, because they travelled further. In North Korea’s previous missile test in May, the projectiles flew only 260 miles and 168 miles, though they reached the same altitude of about 30 miles.

“We’re very cautious because it’s difficult to extend the range within such a short time,” said one military official, who asked not to be identified due to the sensitivity of the issue.

The two U.S. officials said it would take time before they were certain whether the missiles were new or not.

One said North Korea had generally been shortening the time it took to prepare missiles for launch, potentially decreasing the warning time the United States and allies have to detect them. 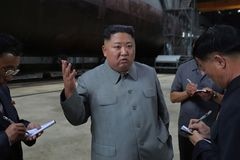