Banks, student groups and even political leaders around the world risk arrest under a new national-security law in Hong Kong that can impose life imprisonment for conduct Beijing sees as threatening, no matter where it takes place.

Chinese authorities have called the new law, which was kept secret until it was set in place at 11 p.m. Tuesday, a commonplace legal measure to respond to protect the city and the broader country – China – from threats of secession, subversion, terrorism and foreign influence.

But the law applies to any act considered a violation, even if it is committed outside Hong Kong by someone who is not a resident.

That gives it such broad reach that it could result in the city arresting international scholars who write favourably about Hong Kong independence, politicians who support sanctions against Hong Kong or even groups of Canadian students who provide financial support to the city’s protesters, and could as a result be labelled a terrorist organization. Overseas-headquartered financial institutions that comply with U.S. sanctions against the city could be prosecuted for foreign collusion.

“I am hard-pressed to think of a national-security law anywhere in the modern world with broader reach, either substantive or territorial,” said David Law, Sir Y.K. Pao Chair in Public Law at The University of Hong Kong.

The leadership in Hong Kong and Beijing has said the law will, as chief executive Carrie Lam put it this week, “protect the life and property, basic rights and freedoms of the overwhelming majority of our citizens.”

The new rules ban organization and collusion against government, not criticism of it, Ms. Lam said.

The law formally leaves untouched the contract law that has underpinned Hong Kong’s rise as a centre for commerce and finance. It includes specific references to protection of rights to expression, assembly, publication and association. It is designed, its backers say, to respond to serious threats.

But the first arrests under the law this week included a young person with a hand-lettered sign saying “Hong Kong Independence.” Local authorities, in a statement, said the utterance of the chant “Liberate Hong Kong” now constitutes subversion of state power. On Friday, authorities issued the first charge under the new law, against a man accused of riding a motorcycle into police while carrying a Hong Kong liberation flag.

The rapid application of the new regime has heightened fears that the law – which authorizes security agents who are not subject to local rules and gives sole power to the city’s chief executive to designate national-security judges – will create a draconian legal environment that polices speech and imposes harsh penalties on those critical of Beijing.

“It will definitely create self-censorship amongst artist and curators,” said Kacey Wong, an art activist who previously taught at the Hong Kong Polytechnic University. But, he cautioned, such fears should be shared outside Hong Kong, given that the law applies to offences against the city committed “outside the Region by a person who is not a permanent resident of the Region.”

That “can be read as a hidden ‘invasion’ in legal form,” said Mr. Wong. It is “of big concern to the international community. It invades the legal rights of other nationals.”

Hong Kong law can be used to arrest people only inside the city.

And it is not unusual for countries to write laws that apply to actions outside their borders. In the U.S., the Foreign Corrupt Practices Act bans graft on foreign soil by anyone working for a company whose stock trades in the country.

Canada’s Magnitsky legislation, the Justice for Victims of Corrupt Foreign Officials Act, allows the seizure or freezing of Canadian property belonging to foreign nationals with a hand in “extrajudicial killings, torture or other gross violations of internationally recognized human rights.”

But both of those laws contain considerable safeguards. The U.S. anti-corruption law, for example, includes a list of specific defences that can be made by an accused. The Canadian Magnitsky law details the rights of foreign nationals subject to sanction.

The Hong Kong security law contains none of those measures.

“It is wrong to say it is just like security laws elsewhere. The institutions to balance national-security concerns against individual rights are simply not there,” said Alex Wang, a scholar of Chinese law at UCLA.

Instead, its broad provisions can be marshalled by police to issue censorship decrees without a court order and compel information from journalists, representatives of foreign political parties and publishers.

That could include Facebook and other social-media companies, Francis Fong, honorary president of the Information Technology Federation, warned local media Friday.

The law’s language on foreign influence, too, “is staggering in its breadth,” said Kent Roach, a legal scholar at the University of Toronto who served as research director for the Commission of inquiry into the Investigation of the Bombing of Air India Flight 182. “It could criminalize much peaceful international advocacy.”

And, he said in an e-mail to The Globe and Mail, “the prohibition of seriously disrupting the formulation or implementation of laws or provoking hatred towards the Chinese government by unlawful means could include what I am saying to you now.”

“The law is so broadly written, and Beijing has reserved so much interpretive and enforcement power to itself, that it’s very hard to know whether you can express yourself about events in Hong Kong or even Taiwan and not run afoul,” Prof. Law said.

Less uncertain is the law’s potential application to those who are outspoken overseas. Its worldwide reach means that “much of the U.S. Congress, the European Parliament, the British government, the United Nations and others too would be guilty,” Benedict Rogers, an activist who is deputy chair of the British Conservative Party’s human-rights commission, wrote Thursday in Hong Kong’s Apple Daily.

Mr. Rogers has himself already been blocked from coming to Hong Kong.

For Chinese authorities, the law “is designed to send a message to the world that they want to go after critics well beyond their borders,” he said in an interview.

“We know the Chinese Communist Party has a track record of defining subversion as anything it doesn’t like.” 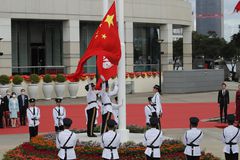 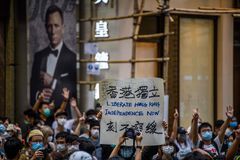 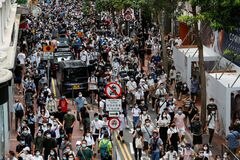