The new national-security law Beijing imposed on Hong Kong could splinter the city’s vaunted justice system, damaging rights to a fair trial for those accused of subversion or terrorism and spreading a chill throughout a broader court system that has prided itself on fairness.

Under the law, judges can be turfed for what they say, court proceedings can be held in secret, the accused can be dispatched to China to stand trial and even the presumption of innocence is eroded, lawyers say. The statute contains a bias against bail that is likely to leave people behind bars until their case can be heard.

The law has been called the “death” of a free Hong Kong, spreading disquiet through artists, journalists, activists – and lawyers, who see in the law an affront both to the legal bedrock of a global financial centre and to their own security.

A eulogy for Hong Kong’s dream of freedom

Within 24 hours of taking effect, the law was used to arrest 10 people, including protesters accused of “inciting or abetting others to commit secession” for holding handwritten signs that said “Hong Kong Independence.” The city’s government, in a statement Thursday, said a chanted slogan made popular over the past year, ”Liberate Hong Kong, the revolution of our times,” is now considered subversion of state power.

“Some of us are very emotional about the new law, fearing for our own safety,” said Hong Kong barrister Douglas Kwok, who has represented some of the thousands of protesters arrested over the past year.

“We are now in the same system as China,” he said. “The rule of law is questionable now in Hong Kong,” he added. And “not only in Hong Kong. Because the law applies worldwide.”

Authorities in Beijing and Hong Kong have pledged protection for human rights under the new law, saying it will affect only a small group of people. Its adoption, they say, will bring stability to a city racked by frequently violent protests.

“Whenever a new criminal statute is introduced, there are invariably some people who scaremonger, and they are often the same people who objected to the law in the first place,” said Grenville Cross, a criminal-justice analyst who is a former director of public prosecutions in Hong Kong.

The national-security law will only be used to prosecute cases with a reasonable chance of conviction, which requires proof beyond a reasonable doubt, he said. And the statute’s promise to protect freedoms of press, publication, association, assembly in accordance with the law “could not, frankly, be any clearer,” Mr. Cross said.

Little is known with certainty about how the law will be applied. Its full text was not released until 11 p.m. Tuesday, exactly the time it came into effect. Written without broad consultation in Hong Kong, it has yet to be used to try a case, although the first tests will come soon.

Its “vague and broad definitions, generally without common law precedent” – and the ultimate oversight it gives to authorities in Beijing – make the legislation “anathema to the rule of law in every respect,” said Hong Kong human-rights lawyer Mark Daly.

Those most familiar with the Chinese exercise of justice offered sympathy for those worries. “This law has inevitably pushed Hong Kong lawyers to a point where they have no clue what to do,” said Mo Shaoping, a prominent Chinese human-rights lawyer. He expects conviction rates in Hong Kong to rise, and lawyers to struggle even to represent people accused of national-security crimes.

National-security cases, for example, can only be heard by judges selected by the city’s chief executive – a position heavily influenced by Beijing – and those judges can only sit for a year at a time, an unusually short tenure. In addition, any judge can be removed from those cases at any time, according to the law, “if he or she makes any statement or behaves in any manner endangering national security during the term of office.”

What happens, then, if a judge decides a person in such a case is innocent?

“In the eyes of the government, that judge would be releasing someone whom [the government] says is a threat to national security,” said Randy Shek, a barrister who has helped co-ordinate hundreds of lawyers offering pro bono legal services for protesters. That could be deemed a threat to national security, he said, suggesting “the outcome of these trials is pretty much a foregone conclusion.”

“The judges have a personal liability if they acquit,” he said.

“The chilling effect is such that I anticipate most lawyers would be very reluctant to take on these cases,” he said. In China, “we all know very well what happens to lawyers who defend enemies of the state.”

Authorities in Beijing, who authored the law, routinely arrest and jail lawyers, and have declared human-rights defenders one of the chief threats to the country.

Chen Duanhong, a law professor at Peking University, brushed off such concern as groundless. Legal representation is “not ordinary support,” he said. And “Hong Kong has done a brilliant job – even better than the U.S – in securing its judicial independence.”

The city’s existing rules ensure judges “are to be appointed on the basis of their judicial and professional qualities,” rather than for political reasons, Geoffrey Ma, chief justice of Hong Kong’s Court of Final Appeal, said in a statement Thursday. Only the law and legal principles will guide judicial consideration, he said.

Indeed, the strength of Hong Kong’s judiciary, with its tradition of independent judges, means that the fair execution of justice in national-security cases “is still attainable,” said Simon Young, associate dean of research at the University of Hong Kong faculty of law. Those accused retain a right to legal representation and to fully answer the charges against them, while “the impartiality and independence of the court remain unchanged,” he said.

But the law imposes new restrictions that include the possibility of trial without jury, the introduction of state-secrets evidence that cannot be contested and a ban on lawyers disclosing information deemed confidential.

“All of these exceptions make it considerably more difficult for an individual facing trial in Hong Kong to have a fair trial,” Prof. Young said.

He said the law also allows for those arrested to face trial in China, where they have at best “a small glimmer of hope” that they will be treated more fairly than others in the Chinese justice system, whose judges answer to the Communist Party and whose courts boasts a conviction rate in excess of 99.9 per cent.

At the same time, criminal cases with no relation to national security are likely to feel the shadow of the new law, warned Mr. Kwok. Chinese authorities have said that spreading unfounded allegations of police misconduct could be considered a violation of the law’s prohibition on provoking hatred against authorities. What happens if those allegations are now made in court?

“Every day, we report police brutality to the court,” Mr. Kwok said. He worries that such allegations, if rejected by a judge, could now be considered subversion.

In the past, a defendant could “advance whatever arguments against the police without any fear,” he said. “That is no longer the case.” 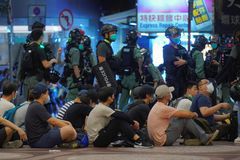 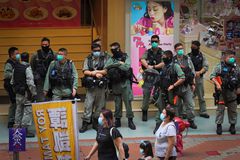 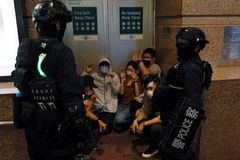