The mayors of New York City and Chicago said on Tuesday they would take President Donald Trump to court if he sent unidentified U.S. government agents to police their cities, pushing back on a threat that has sparked widespread controversy over the use of federal force.

But Chicago Mayor Lori Lightfoot also said she would accept an influx of FBI agents and other identified law enforcement officials from the Trump administration, an acknowledgment of the scale of gun violence and other crimes plaguing her city.

Lightfoot and New York City Mayor Bill de Blasio spoke a day after Trump said he would send law enforcement to several cities including Baltimore, Chicago, New York and Philadelphia to crack down on protests against racism and police brutality ignited by George Floyd’s death in Minneapolis police custody on May 25.

A Republican, Trump made a point of saying the mayors of the cities on his list were liberal Democrats, underpinning concerns the threat was politically motivated. Federal agents last week were dispatched to counter protests in Portland, Oregon, where protesters have complained of agents making arrests without identifying themselves and using unmarked rental cars.

Opinion polls show Trump trails Democratic challenger Joe Biden in the run-up to a Nov. 3 presidential election. Trump has sought to make a crackdown a campaign issue, taking the spotlight off his response to the coronavirus pandemic, a weak point for him in the polls.

De Blasio said Trump’s threat was likely bluster, but added that he would challenge any deployment in the courts. He said the actions of unidentified officers grabbing citizens in Portland “appeared to violate basic constitutional rights.”

“This president blusters and bluffs and says he’s going to do things and they never materialize on a regular basis, so we should not overrate his statements, they are so often not true.”

Lightfoot said on Tuesday that she had been told that no unidentified officers would be deployed. The Chicago Tribune had reported on Monday that the U.S. Department of Homeland Security (DHS), which oversees the forces in Portland, would deploy 150 agents to help tamp down violence in the city.

“Unfortunately there’s been a lot of sabre rattling about that coming from the president and members of his team,” Lightfoot told reporters. “What I understand at this point, and I caveat that, is that the Trump administration is not going to actually deploy unnamed agents in the streets of Chicago.”

Instead, Lightfoot said reinforcements would come from the FBI, the Drug Enforcement Administration and the Bureau of Alcohol, Tobacco, Firearms and Explosives and “plug into” federal agencies already co-ordinating with the city on crime.

The Portland protests have gone on for more than 50 nights. On Monday, video showed federal agents firing tear gas, protesters pulling down fencing around the federal courthouse, and hundreds of people dressed in yellow who said they were mothers and fathers demanding the agents withdraw.

DHS has placed about 2,000 officials from U.S. Customs and Border Protection (CBP) and other agencies on standby for possible deployment to cities, the New York Times reported.

White House spokeswoman Kayleigh McEnany told a briefing on Tuesday that dispatching agents was justified by a federal statute empowering the secretary of Homeland Security to deputize agents to protect federal property and people on that property.

At a separate briefing, acting Homeland Security secretary Chad Wolf said his agents were properly identifying themselves in Portland. “We are only targeting and arresting those who have been identified as committing crime,” Wolf said.

However, legal experts said there were limits to Trump’s power and that he could be challenged in court. “The president is not the king,” said Kent Greenfield, a Boston College law professor.

Oregon Attorney General Ellen Rosenblum sued the Department of Homeland Security last week and asked a federal judge to grant a temporary order blocking its officers from what she called unlawful detentions that lacked probable cause.

Philadelphia District Attorney Larry Krasner said he would criminally charge any federal agents who arrested citizens without probable cause or restrained them unlawfully. He said he saw potential crimes by agents in video footage from Portland.

But Krasner said he was skeptical that Trump would actually send agents to Philadelphia. He said the city’s protests had been peaceful. “Let us not take these fluffy words and act like they are more than they really are,” he said. “It’s really just bluster.” 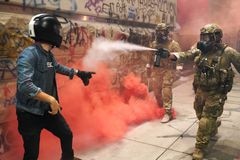 Trump digs in on federal crackdown against Portland protesters
July 20, 2020 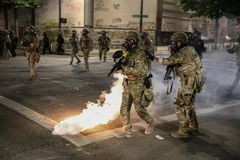 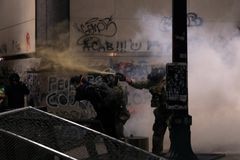