Prime Minister Jacinda Ardern of New Zealand will attempt this week to use the terrorist attack that killed 51 Muslim worshippers in Christchurch mosques in March to demand that the biggest internet platforms do more to stamp out violent and extremist content.

Ardern will be in France with President Emmanuel Macron to sign an agreement they crafted called the “Christchurch Call” that asks the social-media giants to examine the software that directs people to violent content and to share more data with government authorities and each other to help eradicate toxic online material, according to officials from New Zealand and France involved in drafting the proposal.

Jacinda Ardern: How to Stop the Next Christchurch Massacre

The accused gunman’s use of social media to livestream his rampage in New Zealand and to share a hate-filled manifesto crystallized the vulnerability of internet platforms to extremist and violent views.

Ms. Ardern’s effort adds momentum to a global push to curb the power of the world’s largest internet platforms.

But even as policy-makers agree that something needs to be done, there’s little consensus on what to do. From London to New Delhi, governments are drafting laws with differing approaches to regulating the internet, raising concerns in some quarters that the rules may, in some cases, go too far and hinder free expression.

Ms. Ardern has argued that a coordinated global approach is needed. The signing of the Christchurch Call was organized around a meeting of digital ministers from the Group of 7 countries this week in Paris.

A number of countries are expected to sign on to the nonbinding pledge, including Britain, Canada, Jordan, Senegal, Indonesia, Norway and Ireland, according to officials involved in drafting the accord. The United States, which has been reticent to regulate the internet out of concerns it will harm free speech, is not among the expected signers. Nor is Australia.

The pledge does not contain enforcement or regulatory measures. It will be up to each country and company to decide how to carry out the commitments, according to two senior New Zealand officials involved in the drafting, who spoke on the condition of anonymity because the exact wording of the pledge was being finalized.

Social-media companies will be left with the thorny task of deciding what constitutes violent extremist content, since it is not defined in the accord.

“We share the commitment of world leaders to curb the spread of terrorism and extremism online,” Nick Clegg, Facebook’s vice-president for global affairs, said in a statement. “These are complex issues, and we are committed to working with world leaders, governments, industry and safety experts at next week’s meeting and beyond on a clear framework of rules to help keep people safe from harm.”

Ms. Ardern has been attempting to build a global consensus on reining in violence and extremism on social media since the March 15 attacks, in which the Australian man accused of the shooting – who faces dozens of murder and attempted murder charges – broadcast part of the massacre live on Facebook.

Earlier this month, she said she wanted action that went beyond “takedown policies that are enforced through government regulation.”

“So much of what we’re trying to do is about preventing these platforms being used in that way at all,” Ms. Ardern said.

While the pledge isn’t enforceable, Ms. Ardern and Mr. Macron hope an accord tied to the Christchurch massacre will prod the internet companies into action. If improvements aren’t made, the officials said, tougher mandatory regulations loom.

The pledge asks for several commitments from technology companies, including robust enforcement of their terms of service, reducing the risks of livestreaming and sharing research about the software that flags objectionable content. Versions of the gunman’s video have remained on Facebook and Instagram since the attacks.

The social-media giants must also promise to re-evaluate their algorithms that direct users to extremist content, and commit to redirecting people looking for extremist material. Instagram has deployed that measure to help users searching images of self-harm.

Under the agreement, governments must make a range of promises, including adopting and enforcing laws that ban objectionable content – as New Zealand did in the wake of the attacks by making the possession or sharing of the gunman’s video a crime – and setting guidelines on how traditional media outlets can report terrorism without amplifying it.

Concerns from U.S. officials included how the pledge would affect First Amendment rights to free speech, several officials said. Ms. Ardern has said she was deliberately avoiding a broader debate about hate speech to focus the pledge narrowly on violent content.

“This isn’t about freedom of expression; this is about preventing violent extremism and terrorism online,” she said last month. “I don’t think anyone would argue that the terrorist had a right to livestream the murder of 50 people.” 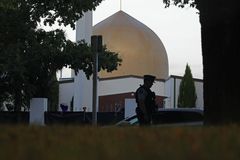 New Zealand Police charge man over possession of explosives in Christchurch
May 1, 2019 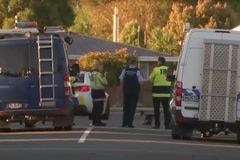 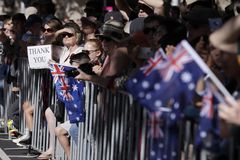