Myanmar leader Aung San Suu Kyi said on Thursday the jailing of two Reuters journalists had nothing to do with freedom of expression and that they can appeal against their seven-year sentences, prompting a sharp rebuke from the United States.

Suu Kyi, in her first public comment on the case since the two, Wa Lone, 32, and Kyaw Soe Oo, 28, were convicted last week, referred to the colonial-era law under which they were charged.

“They were not jailed because they were journalists, they were jailed because ... the court has decided that they have broken the Official Secrets Act,” she said at a conference of the World Economic Forum in Hanoi.

U.S. Ambassador to the United Nations Nikki Haley described Suu Kyi’s remarks as “unbelievable,” in what appeared to be the sharpest direct public rebuke of the Myanmar leader by a U.S. official.

“First, in denial about the abuse the Burmese military placed on the Rohingya, now justifying the imprisonment of the two Reuters reporters who reported on the ethnic cleansing. Unbelievable,” Haley wrote on Twitter on Thursday.

Speaking at a later news briefing, U.S. State Department spokeswoman Heather Nauert said Washington disgreed with many of the comments Suu Kyi had made and added that the journalists should be released immediately.

“That verdict calls into question press freedom in Burma (Myanmar),” she said.

“The fact that those journalists were convicted despite testimony by police that they were ordered to frame those journalists, that in our view raises serious concerns about the judicial independence and the fair trial guarantees they are supposed to have in that country,” Nauert said.

“We continue to urge the government of Burma to take action immediately to correct this injustice.”

Suu Kyi made her comments in response to a question from a forum moderator who asked whether she felt comfortable about the reporters being jailed.

Wa Lone and Kyaw Soe Oo were convicted on official secrets charges on Sept. 3 in a landmark case that has raised questions about Myanmar’s progress towards democracy.

The two reporters, who had pleaded not guilty, were investigating the killing of 10 villagers from the Muslim Rohingya minority by the Myanmar security forces at the time of their arrest. The military later acknowledged the killings and said it punished several soldiers.

The United States was a strong backer of Suu Kyi as she emerged in the 1980s as a pro-democracy icon who endured years of house arrest for standing up to military rule and was awarded the Nobel Peace Prize for her struggle.

In Hanoi, Suu Kyi questioned whether people were aware of the details of the case against the reporters.

“I wonder whether very many people have actually read the summary of the judgement which had nothing to do with freedom of expression at all, it had to do with an Official Secrets Act,” she said.

Myanmar government spokesman Zaw Htay was not immediately available to comment on Suu Kyi’s remarks. He said last week the court was independent and followed due process.

Reuters, in response to Suu Kyi’s comments, said in a statement: “We continue to believe that Wa Lone and Kyaw Soe Oo did not violate Myanmar’s espionage law, and at no point in time were they engaged in activity to hurt their country.”

During eight months of hearings, Wa Lone and Kyaw Soe Oo testified that two policemen they had not met before handed them papers rolled up in a newspaper during a meeting at a Yangon restaurant on Dec. 12.

Almost immediately afterwards, they said, they were bundled into a car by plainclothes officers.

On Feb. 1, a police witness said under cross-examination that information in the documents had already been published in newspapers.

In April, a prosecution witness testified that a senior officer had ordered subordinates to plant secret documents on Wa Lone to “trap” the reporter.

Phil Robertson, deputy Asia director for Human Rights Watch, said Suu Kyi was wrong when she spoke about the verdict.

“She fails to understand that real ‘rule of law’ means respect for evidence presented in court, actions brought based on clearly defined and proportionate laws, and independence of the judiciary.”

The convictions came amid mounting pressure on Myanmar over a security crackdown sparked by attacks by Rohingya Muslim insurgents on security forces in Rakhine State in west Myanmar in August 2017.

Earlier on Thursday, Suu Kyi said that in hindsight, her government could have handled the Rakhine State situation better.

“There are of course ways in which we, with hindsight, might think that the situation could have been handled better,” she said. “But we believe that for the sake of long-term stability and security we have to be fair to all sides ... We cannot choose and pick who should be protected by the rule of law.”

More than 700,000 stateless Rohingya have fled into Bangladesh, according to UN agencies. Myanmar has denied accusations of atrocities made by refugees, saying it conducted a legitimate counterinsurgency operation against militants.

UN investigators said last month that Myanmar’s military carried out mass killings and gang rapes of Rohingya with “genocidal intent”, and that the commander-in-chief and five generals should be prosecuted under international law.

Haley said last month that findings of a yet-to-be released State Department investigation into the crisis were “consistent” with those of the UN report.

However, Washington, which has been competing for influence in Myanmar with its strategic rival China, has so far spared the Myanmar’s top generals from sanctions. 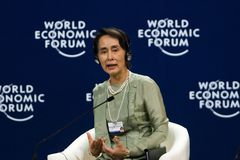 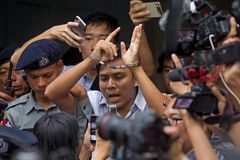 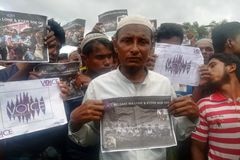