Japan needs to bolster its missile defences and its alliance with the United States, its government stressed Tuesday in an annual defence review that judged North Korea to still be a serious threat that has not taken concrete steps to denuclearize.

The defence paper, approved Tuesday by the Cabinet, said Japan must add to its missile defence capabilities to be fully prepared while watching if North Korea keeps its promise.

North Korea tested intercontinental ballistic missiles last year, including launching some over Japan, and it deploys several hundred shorter-range Rodong missiles that capable of hitting Japan. The defence paper also says Pyongyang likely has made miniaturized nuclear warheads it can place atop ballistic missiles, an advancement of its nuclear capability North Korea has claimed to have achieved.

North Korea has increased the range, accuracy and versatility of its missiles and diversified its launch sites and methods over the past few years. The North has since 2016 conducted three nuclear tests and more than 40 missile tests, the paper said.

“Its military actions have become unprecedentedly serious and imminent threat to Japan’s national security,” the paper said. “There is no change in our basic recognition about the threat of North Korea’s nuclear weapons and missiles.”

It was “significant” that Kim promised to pursue denuclearization of the peninsula but it is necessary to watch what North Korea does to scrap its nuclear weapons and missiles, the report said.

While the United States is primarily concerned about the ICBMs that can reach its mainland, Japan is within range of North Korea’s smaller missiles. Prime Minister Shinzo Abe has pushed to raise Japan’s military participation and its missile defences. Joint exercises with the U.S. and other defence partners including Britain and Australia have significantly increased, and Japan is buying costly U.S. equipment as Trump tries to sell more weapons and reduce the U.S. trade deficit.

Japan is currently updating its national defence guidelines and the medium-term defence program to reflect North Korea’s threat, and to have “necessary and sufficient defence capabilities qualitatively and quantitatively,” the paper said.

Japan has also stepped up surveillance and patrolling in regional seas to crack down on offshore ship-to-ship oil transfers to North Korean vessels in violation to UN sanctions.

Tuesday’s report comes days before the Defence Ministry is set to approve its fiscal 2019 budget plan that would include an initial acquisition cost for a set of land-to-air missile defence system, Aegis Ashore. Opposition to that purchase has risen since Pyongyang suspended missile tests this year as it made diplomatic overtures to its ally China as well as the U.S. and South Korea.

The defence paper also raised strong concerns about China’s military budget increases, its modernization and buildup of forces and weaponry, and its continuing assertive moves in the region’s airspace and seas.

Japan and China have long disagreed over their history and over a cluster of East China Sea islands they both claim, but their relations have seemed to improve as China tries to be a leader in Asia, a better neighbour and a contrast to Trump’s U.S.-first policy. The defence paper welcomed China’s co-operation in starting a mechanism for sea and air defence communications, an initiative meant to avoid unanticipated events in disputed areas.

North Korea expels Japanese tourist who had been detained: report
August 27, 2018
Opinion
Is North Korea really willing to denuclearize? We will soon find out
August 26, 2018 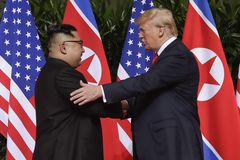 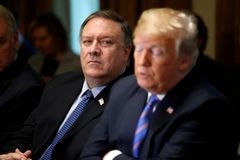