Scenes of burning cars, petrol bombs and teenagers throwing bricks were supposed to be part of Northern Ireland’s dark past, but the province has been gripped by some of the worst violence in years this week as tensions rise over Brexit and policing.

Eight nights of rioting in several communities have left 55 police officers injured and a dozen people under arrest, including some as young as 13. On Wednesday, police said about 600 people clashed at the Lanark Way interface, a gateway in Belfast that separates nationalist and loyalist neighbourhoods. Protesters threw petrol bombs and rocks at police while one group hijacked a double-decker bus and set it on fire.

“Young people were being encouraged to commit criminal acts by adults, who stood by clapping and encouraging the violence,” said Jonathan Roberts, an assistant chief constable with the Police Service of Northern Ireland. “There is absolutely no justification for this.”

Prime Minister Boris Johnson said Thursday that he was deeply concerned about the violence, and Northern Ireland’s executive issued a statement condemning the rioters. “Destruction, violence and the threat of violence are completely unacceptable and unjustifiable, no matter what concerns may exist in communities,” the statement said.

But there were few signs Thursday that the tension was dissipating. Leaders from both communities blamed each other for the violence, and representatives from the two main political parties – the Democratic Unionist Party and the nationalist Sinn Fein – traded accusations during an emergency debate in the legislature.

“Protestants, unionists and loyalists no longer feel that they are being heard, listened to or valued in what is supposed to be a shared society,” Joanne Bunting, a DUP MLA, told the assembly. “Our community has had enough.”

Sinn Fein Leader Michelle O’Neill shot back by blaming “illegal loyalist paramilitaries” for the violence. “These people are no role models for our youth. They’re outdated, they’re antiquated and they’re caught in a time warp,” she said.

The protests have been sparked largely by growing anger in loyalist communities about Brexit and the implementation of the Northern Ireland Protocol, a key agreement between the U.K. and the European Union that ensures there is no hard border between Northern Ireland and Ireland.

Under the protocol, Northern Ireland has remained within the bloc’s customs union so goods can move freely into Ireland, an EU member, and from Ireland to Northern Ireland. However, that has meant that products coming from the rest of Britain now face customs checks and tariffs.

Since the protocol took effect in January, there have been widespread reports of lengthy delays at Belfast’s port and empty store shelves, as suppliers in Britain stopped shipping goods to Northern Ireland to avoid the hassle. Roughly 100 online retailers have dropped customers in Northern Ireland, and even plants from Britain were held up because of EU agricultural rules.

Loyalists are particularly aggrieved about the protocol because they feel it has cut Northern Ireland off from the rest of Britain and pulled the province closer to Ireland. First Minister Arlene Foster, who heads the DUP, has called on Mr. Johnson to scrap the agreement.

The protocol “is completely offensive for those of us who live here and know we are very much part of the United Kingdom,” Ms. Foster said this week during an event with the Institute of Economic Affairs.

The anger turned more sinister in March when a group called the Loyalist Communities Council, which represents several paramilitary groups, came out against the protocol and said it would no longer support the 1998 Good Friday Agreement, which ended decades of sectarian violence.

“The protocol gives effect to the Irish nationalist position at the expense of the unionist position,” the group said in a letter to Mr. Johnson. The LCC promised to hold peaceful protests but warned: “Please do not underestimate the strength of feeling on this issue right across the unionist family.”

Loyalist fury has been aggravated by a continuing controversy surrounding the funeral of Bobby Storey, a senior figure in the Irish Republican Army. Several Sinn Fein politicians, including Ms. O’Neill, attended Mr. Storey’s funeral last June, which drew large crowds of people as the coffin moved through the streets of West Belfast.

Ms. Foster and other unionists said the funeral broke pandemic physical-distancing rules and demanded that Ms. O’Neill resign. Ms. O’Neill apologized but insisted that she didn’t violate COVID-19 restrictions. The police launched an investigation and last week the Public Prosecution Service said no charges would be filed.

That decision has fuelled loyalist anger and led to calls for the resignation of Chief Constable Simon Byrne. “Sinn Fein appear to be above the law,” Ms. Bunting told the assembly, echoing many of the rioters. “There’s absolutely two-tiered policing in Northern Ireland.”

As the debate raged on Thursday, Belfast and other cities braced for more violence. Loyalist groups have planned more protests for Friday and over the weekend.

“The protocol has exposed the fractured nature of our society and is reigniting sectarian feuds,” tweeted Moore Holmes, a prominent loyalist in East Belfast. “There are so many issues that need solving, but the ignition for this is the protocol. It must go … Loyalists are entitled to protest – as is their right.”

Police and politicians appeal for calm after third night of unrest in Northern Ireland
April 5, 2021 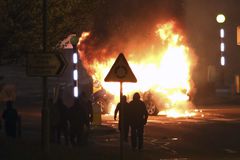 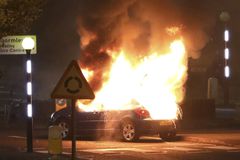