In a reckoning five years in the making, an administrative judge on Friday recommended firing a New York City police officer over the 2014 chokehold death of an unarmed black man whose dying cries of “I can’t breathe” fuelled a national debate over policing, race and the use of force.

The city’s police commissioner will make a final decision this month on whether to fire Officer Daniel Pantaleo, who is white, for his role in Eric Garner’s death. Officer Pantaleo was suspended shortly after the judge’s decision became public, about two weeks after federal prosecutors closed the book on criminal charges.

Mayor Bill de Blasio hailed the judge’s report as “a step toward justice and accountability,” while Officer Pantaleo’s lawyer and a union leader said it penalized an officer for properly doing his job. The lawyer said he will appeal to state court if Officer Pantaleo is fired.

Mr. Garner’s mother, Gwen Carr, said the report brought her “some relief,” but was overdue and fell short of true accountability.

“It’s past time for Mayor Bill de Blasio and the NYPD to end their obstruction, stop spreading misleading talking points and finally take action for my son,” she said in a statement.

When a Staten Island grand jury declined to indict Officer Pantaleo on state charges in December, 2014, demonstrations flared in New York and several other cities.

The judge’s findings were provided to Officer Pantaleo’s lawyer and the Civilian Complaint Review Board, the watchdog agency that acted as a prosecutor at his department trial last spring.

Under department rules, Officer Pantaleo’s lawyer will have about two weeks to respond before Police Commissioner James O’Neill makes his decision.

The lawyer, Stuart London, said Officer Pantaleo, 33, was disappointed in the administrative judge’s recommendation that he be fired but remains “cautiously optimistic” he ultimately won’t be dismissed.

Mr. London and Police Benevolent Association President Patrick Lynch urged Commissioner O’Neill to stand up for Officer Pantaleo, saying he’d done nothing wrong and that firing him would leave officers feeling they can do their jobs without losing them.

“We’re calling on Commissioner O’Neill to save the New York Police Department. Allow us to be effective again,” Mr. Lynch said.

Mr. Lynch said that given the decision, police officers might be considered reckless every time they put their hands on someone. He urged officers to keep responding to 911 calls, but “take it a step slower” and call for a supervisor instead of using physical force on a suspect that is not co-operative.

The administrative judge, Deputy Commissioner of Trials Rosemarie Maldonado, had been tasked with deciding whether Officer Pantaleo used a chokehold – banned by police department policy – to take Mr. Garner to the ground during a confrontation on a Staten Island street.

Officer Pantaleo’s lawyers argued he used an approved “seatbelt” technique to subdue Mr. Garner, who refused to be handcuffed after officers accused him of selling untaxed cigarettes.

Mr. London said that while Ms. Maldonado found that a chokehold was used, she concluded in her 45-page report that a lot of the contact with the neck was accidental and unintentional. The report has not been made public.

In a bystander’s video, it appeared that Officer Pantaleo initially tried to use two approved restraint tactics on Mr. Garner, much larger at 6-foot-2 and about 400 pounds, but ended up wrapping his arm around Mr. Garner’s neck for about seven seconds as they struggled against a glass storefront window and fell to the sidewalk.

The footage showed Mr. Garner crying out, “I can’t breathe,” at least 11 times before he fell unconscious. The medical examiner’s office said a chokehold contributed to Mr. Garner’s death.

Civilian Complaint Review Board Chairman Fred Davie said Ms. Maldonado’s recommendation confirmed what the agency argued at the trial: that Officer Pantaleo’s use of a chokehold caused Mr. Garner’s death.

The Rev. Al Sharpton, appearing with two of Mr. Garner’s children, called on Commissioner O’Neill to “immediately and unequivocally” to accept the recommendation.

Officer Pantaleo was stripped of his gun and put on desk duty after the death but continued to draw a salary, with his pay peaking at more than $120,000 in 2017, according to city records.

Last month, federal prosecutors announced they would not bring criminal charges against Officer Pantaleo after a five-year civil-rights investigation.

Presented with opposing recommendations from two Justice Department units, Mr. Barr sided with prosecutors in Brooklyn who said there wasn’t sufficient evidence to make a case.

Mr. Garner’s death has dogged Mr. de Blasio since it happened in his first year in office.

His initial statements after the death were critical of the officers involved and he talked publicly about having had to warn his own son, who is black, to be careful during any encounters with police. Then, as protests flared, a disturbed man angry about the Mr. Garner and Mr. Brown cases ambushed and killed two New York City police officers as they sat in their cruiser.

Mr. Lynch, of the police union, said at the time that the mayor had “blood on his hands” over the killings. Police turned their backs on Mr. de Blasio at the officers’ funerals.

Mr. de Blasio, who like Ms. Gillibrand is running for the Democratic presidential nomination, also wound up infuriating police reform advocates because of the department’s years-long wait to begin disciplinary proceedings against Officer Pantaleo. The city said it wanted to avoid interfering in the federal civil rights investigation.

Eric Garner’s mother speaks out on the five-year anniversary of his death
July 17, 2019 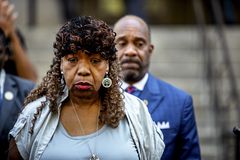 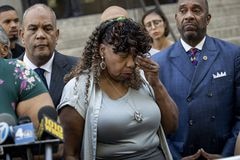 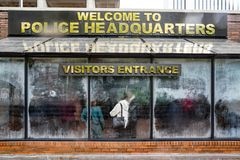