Standing on the deck of the Ukrainian patrol boat Balaklava, Commander Andriy Metekha surveyed the calm grey waters off the port of Odessa this week. It was business as usual, he insisted, despite the war clouds gathering over the Black Sea.

Cdr. Metekha and the crew of the Balaklava have been in what he called “emergency mode” since 2014 and the Russian annexation of nearby Crimea. He considers his country already to be at war. But he also knows things could quickly get worse.

Among all the clues about Russia’s military intent toward Ukraine, the weeks-long journey of six amphibious landing ships that have been circling Europe – they arrived Friday at Russia’s naval base in Syria after leaving the Baltic Sea in mid-January – is among the most menacing. Many believe the ships will next enter the Black Sea, further threatening the lightly guarded southern coastline of Ukraine.

Military analysts see the approach of the landing craft as one more indication that Russia is preparing for a large-scale attack on its neighbour, with the six ships – which are each capable of carrying 10 tanks or 12 armoured personnel carriers, plus upward of 300 soldiers – signalling a possible plan to attack Ukraine from the sea, as well as across its eastern, northern and southern land borders.

Russia, which has amassed some 130,000 land troops around Ukraine, denies it has any plans to invade its neighbour. The United States, Canada, Britain and other Western governments say they have seen intelligence that suggests Russian President Vladimir Putin could order a large-scale assault at any moment.

Odessa’s huge port is a critical supply line for Ukraine and for NATO to land forces in the event of a Russian invasion. The Globe’s Mark MacKinnon took to the water aboard the Ukrainian patrol boat Balaklava as a flotilla of Russian ships heads towards the Black Sea. 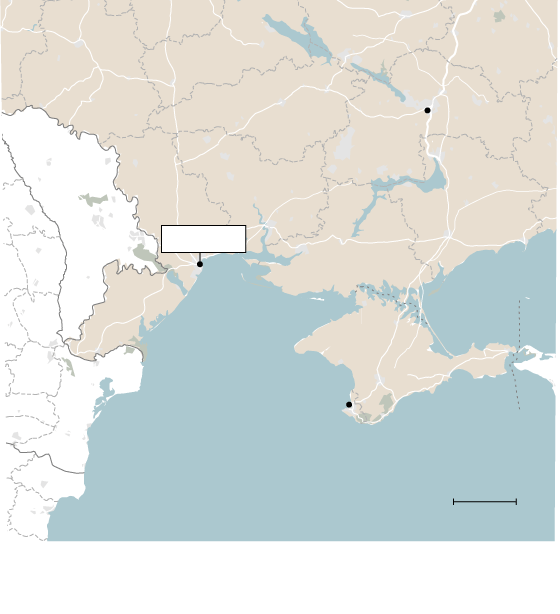 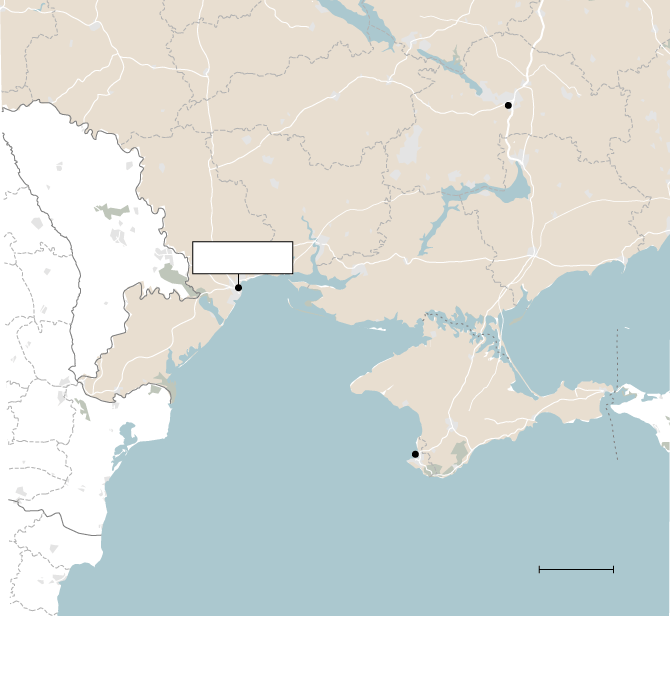 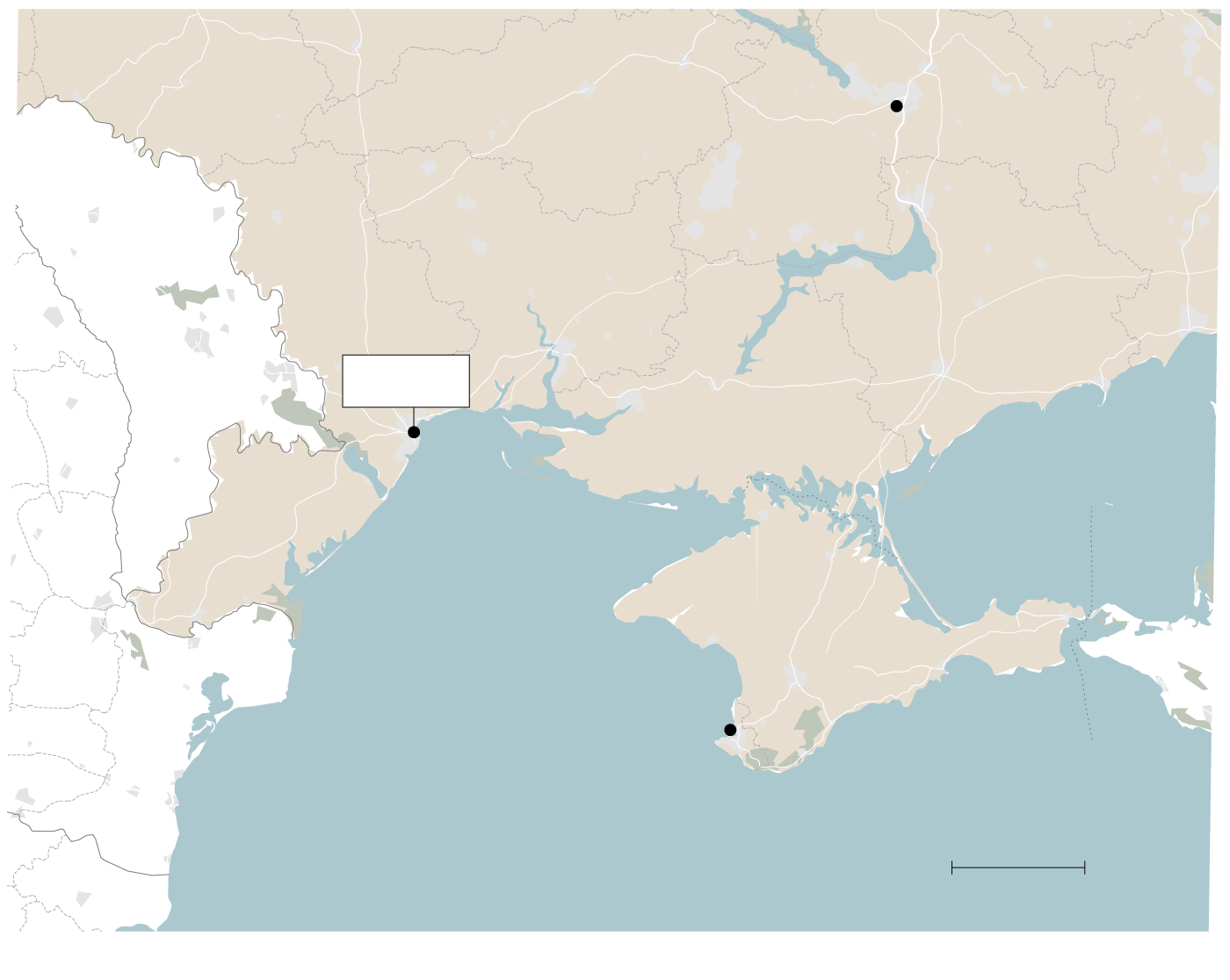 One target of the flotilla approaching the Black Sea, some believe, might be Odessa, a port with close cultural and historical ties in Russia – and which saw bloody street battles eight years ago pitting Ukrainian nationalists against those who wished their city had been annexed by Russia along with Crimea.

Seizing Ukraine’s Black Sea coast would solve a few strategic problems for Mr. Putin. Pushing north from Crimea would give Russia access to the Soviet-built canal that supplied Crimea with agricultural water before Ukraine dammed it after the 2014 annexation. A move east from there would allow Russian forces in the Crimea to connect with the Moscow-backed militia that controls the breakaway Donbas region of Ukraine. Heading west could allow Russian troops to link up with comrades stationed as “peacekeepers” in eastern Moldova.

But the real pearl would be Odessa, a dowdy but lively port founded by the Russian empress Catherine the Great, whose statue stands on one of the city’s main squares. Odessa also holds a special place in Soviet lore as the site of the famed Battleship Potemkin revolt against czarist rule.

The main worry for the crew of the Balaklava – which is named after the port in Crimea that was a Ukrainian naval base until 2014 – is that they could be drawn into some kind of provocation, an incident that could be used to justify a larger Russian attack. The orders for the Ukraine’s coast guard are the same as those given to soldiers on the front line in eastern Ukraine: Don’t react to any provocations.

“We do not allow ourselves to show any emotion,” during the radio arguments with Russian sailors about who is intruding in whose waters, Cdr. Metekha said. Such ship-to-ship debates over sovereignty have been common since 2014. “The calmer we are, the more agitated they get.”

The stoic business-as-usual approach comes from the very top. President Volodymyr Zelensky, who is worried that the talk of war is damaging the Ukrainian economy, has stuck to the line that the threat facing Ukraine is the same as it has been for the past eight years. The “panic” by Western leaders and media about what Russia might do next, he said, doesn’t serve Ukraine’s interests.

Odessa, too, seems calm on the surface, despite the swirling international tensions. But this city still bears the scars of the events of 2014. Some worry that the divisions from that time could resurface as the pressure from Moscow escalates.

Odessa is just 300 kilometres from Crimea. While Canada and the rest of the international community view Russia’s land grab as an illegal occupation, there are some in this Black Sea port who wish Mr. Putin had taken Odessa then too.

Large-scale clashes erupted here after the annexation of Crimea, culminating on May 2, 2014, when pro-Ukrainian and pro-Russian mobs fought with guns, knives, and bricks on the streets of this normally relaxed city.

The melee ended in fiery tragedy when pro-Russian protesters retreated to their base in the city’s Soviet-era Trade Unions House, which was surrounded by the pro-Ukrainian crowd. The two sides threw Molotov cocktails at each other, and the five-storey building was lit ablaze.

Forty-eight people died, including 42 pro-Russian protesters who died either from carbon monoxide poisoning inside the burning Trade Unions building, or from leaping out windows to escape the blaze. Two pro-Ukrainian and four pro-Russian militants died in the fighting earlier the same day.

Some Odessa residents see May 2 as the day they fought back against the Kremlin’s machinations and spared their city a fate similar to Donbas, where pro-Russian groups prevailed in 2014. More than 14,000 people have been killed over the past eight years in Donbas, as the Ukrainian army has battled the Moscow-backed militia that seized the region.

“Because of this day, we have had peace for the past eight years in Odessa,” said Artem Fylypenko, a 52-year-old who was among the pro-Ukrainian fighters in May, 2014, clutching a homemade shield as he waded into hand-to-hand combat near the city’s domed Transfiguration Cathedral, the battle which preceded the torching of the Trade Unions building. Mr. Fylypenko was injured in the fracas when a thrown brick struck his left leg.

But Mr. Fylypenko, who works as a security analyst at the National Institute of Strategic Studies, a government think tank, says Odessa’s place in Ukraine still isn’t completely secure.

“Odessa’s history is connected to the Russian Empire. That’s why some people, especially in Russia, say this is not Ukraine,” he said. “There are some people here who will greet the [Russian] troops with flowers.”

It’s hard to find someone in Odessa who will openly admit to pro-Russian sympathies after the violence of eight years ago. Alexander Prigarin, an anthropologist in the city, says that’s because many of those who feel more Russian than Ukrainian have fled to Crimea or Russia after being questioned by Ukraine’s SBU security service.

But Mr. Prigarin asserts that a quiet majority still feel as he does – that it would be better for Odessa economically if the city was reunited with Crimea as part of Russia.

An estimated 85 per cent of residents of the Odessa region speak Russian as a first language despite a government “Ukrainization” campaign that has had success in other parts of the country.

The changes brought by that effort are most notable in the capital, Kyiv, a historically Russophone city where an increasing number of residents, particularly the younger generation, prefer to address visitors in either Ukrainian or English.

The project has had less success in Odessa, where Russian persists as the lingua franca despite its removal from street signs and government services. A controversial new law introduced this month required all Russian-language media to publish a Ukrainian edition – one that has forced many publications to switch to publishing only in Ukrainian since they can’t afford the cost of two editions.

The result, Mr. Prigarin said, is a city that resents having its culture changed against its will. “If we are talking about public posture, then we are the most pro-Ukrainian city on the planet. But in reality … people in Odessa are wondering when we will live well. Because we’re not living well in Ukraine.”

But admiring Russian culture and speaking the Russian language, he said, don’t equate with wanting to see Ukraine invaded by the Russian army. “The people who have warm feelings for Russia, they see the bombings and carnage in Donbas and that’s not what they want,” he said.

Natalia Haataja, an Odessa resident and the co-owner of Centry Global, a security and risk management company, said there was a section of the population that “would do anything for money” if Russia’s FSB security service paid them enough. But she predicted that Russia would also meet surprising resistance, even in Russophone cities like Kharkiv and Odessa. “Everybody is making plans – but I’ve never met anyone who is scared and preparing to leave,” she said. “I don’t think Odessa can be taken easily.”

Mr. Fylypenko, the security analyst, said that a full-on Russian invasion was less likely than continued “hybrid warfare” aimed at bringing about the collapse of the Ukrainian state. It would be easy, he said, for Russia’s Black Sea Fleet to blockade Odessa – the hub for 75 per cent of Ukraine’s sea trade – and strangle the country’s economy.

The local electricity grid, he said, was reliant on deliveries from the Trans-Dniester region of neighbouring Moldova, which is controlled by pro-Russian separatists. Electricity cuts or a port blockade could provoke anti-government unrest – and release the anger that has been bottled up since 2014.

Eight years later, the Trade Unions building sits empty, with a yellow “for rent” sign hanging from the iron fence that surrounds the property. It’s become a place of quiet pilgrimage, with friends and families of the victims of the fire coming to lay flowers, candles and pictures of the deceased. “We remember. We mourn.”

The graffiti on the building’s flagpole – where a slightly tattered blue-and-yellow Ukrainian banner flies – is angrier, more violent, and unprintable.

“Before [the May, 2014 violence], Odessa was always known as a very tolerant city, very laid back,” said Prof. Dubovyk. “No one expected that to happen here in Odessa. But it did – and the limits of what is possible have been expanded.”

The Russia-Ukraine standoff: More from The Globe and Mail

From Kyiv, senior international correspondent Mark MacKinnon explains what is motivating Vladimir Putin and how Canada and its NATO allies are working on a diplomatic solution.

Amy Knight: On Ukraine, NATO and more, Russia’s Vladimir Putin lives in an alternative reality. How did he get there?

Andrew Coyne: Trudeau stands squarely for Ukraine’s right to defend itself – with everything but weapons