John Sheridan shifts to the edge of the couch in his living room, barely able to contain his rage at the mere mention of a return of customs checks and police patrols along the border between Ireland and Northern Ireland.

“Theresa May will never ever foist a piece of paper on me that dictates to me where I go in my own country,” Mr. Sheridan thunders, practically spitting out the name of the British Prime Minister. The island of Ireland, north and south, “is my country, and I’m not going to be compressed into southwest Fermanagh. I’d be like a stamp on an envelope. No way, no way.”

Mr. Sheridan can practically see the border from his living room window. He’s lived all his life here in Fermanagh in the southwestern part of Northern Ireland on the banks of Lough MacNean, tending cattle and sheep. The U.K.-Irish border zigzags all around his property, cutting through farm fields, crossing over roads, dipping into waterways and travelling beyond the hilltops. But it exists only on maps and rarely affects daily life. The last vestige of a border control was dismantled in 1999 thanks to the 1998 Good Friday Agreement, which ended decades of sectarian violence known as the Troubles.

Whether those controls return has become a make-or-break issue in Brexit talks between the United Kingdom and European Union. Ms. May and EU officials say they don’t want a hard border, but they can’t figure out how to make that work once the U.K. leaves the EU on March 29, 2019, and is no longer part of the bloc’s single market, which allows for the free movement of people, goods and services. A weekend of frantic negotiations ended in a stalemate on Sunday and as EU leaders gather in Brussels on Wednesday for a two-day summit, they’ll make one last attempt to find a solution. If they don’t, the U.K. could leave without any agreement on its future relationship with the EU, something many business leaders fear would be catastrophic because it could lead to tariffs and non-tariff barriers.

For Mr. Sheridan, 56, and thousands like him, the invisible dividing line has become a symbol of how far Ireland and Northern Ireland have come in integrating their economies over the past 20 years and easing the pain of the conflict between factions of Protestants and Catholics that killed thousands of people. Today, many families live on one side, work on the other and socialize in both without any concept of a boundary. Roughly 30,000 people criss-cross the border for work every day, along with 6,000 commercial trucks. The two parts of the island share an electricity system, and food production is so integrated that, raw milk, for instance, is shipped from farms in the North to processing plants in the South and back to the North as cream and butter. Any hard border “would be scandalous for the peace and scandalous for peoples’ businesses,” Mr. Sheridan said.

He barely knows where one country ends and the other begins. He grew up in the North, but his wife, Sylvia, is from the South. He sells his cattle to farmers in the North and his sheep to processors in the South. When he drives over the bridge to Belcoo, about five kilometres away, he crosses the border twice, and the only indication he’s in a different country are the road signs, which switch from miles to kilometres. He remembers when a trip to Belcoo took hours during the conflict, and involved numerous checks by soldiers, police officers and customs officials. When the Good Friday Agreement took hold, “it was like having that proverbial sack of potatoes lifted off your head, off your back, off your mentality,” he said. 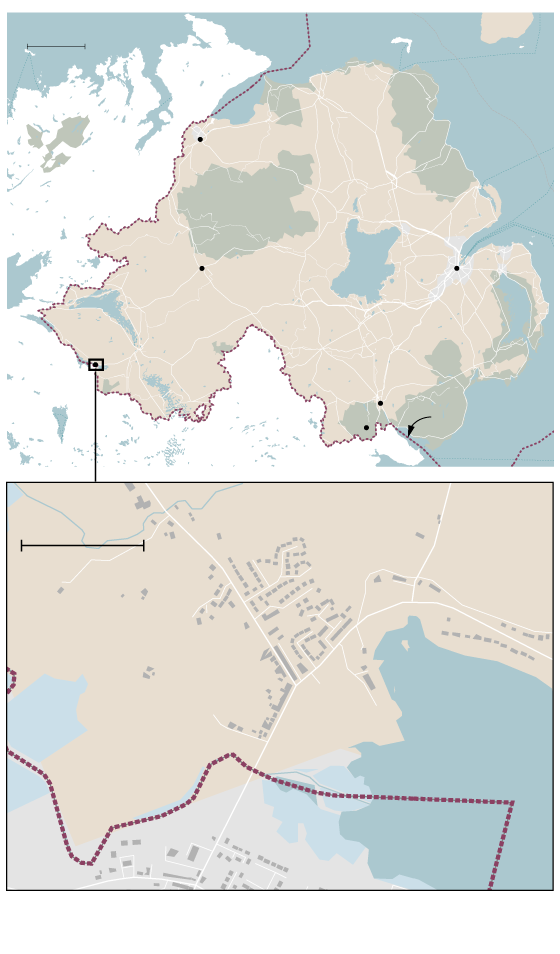 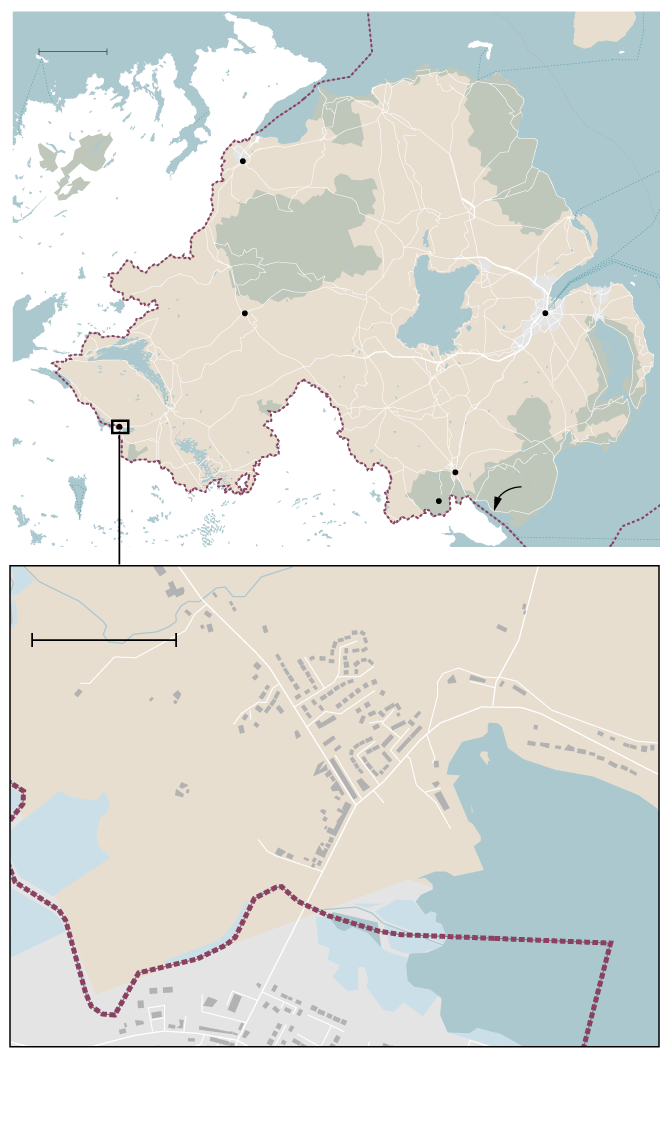 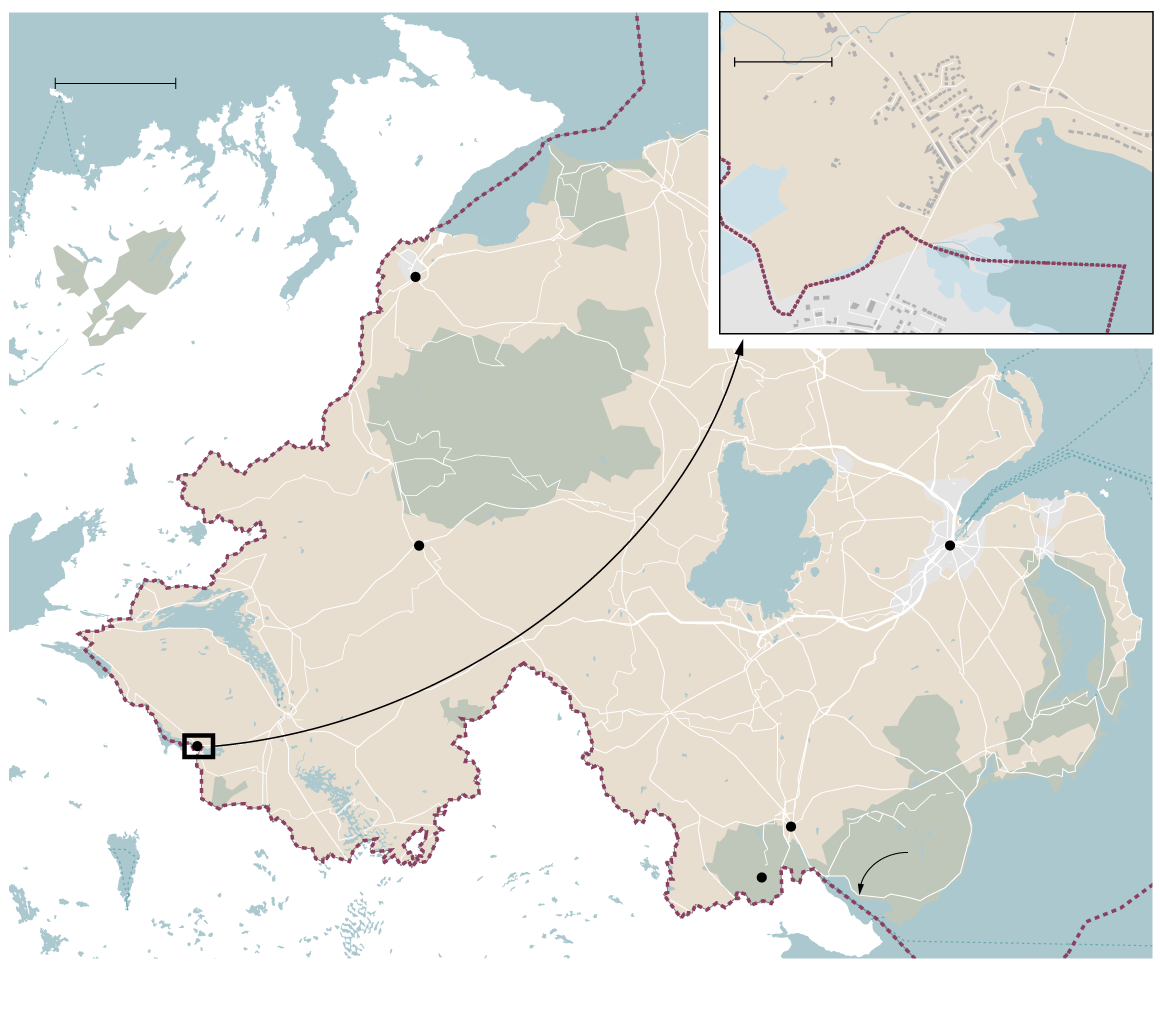 The 500-kilometre border has always been a tortured part of the island’s history. It was created in 1920 by the British government to separate the six largely Protestant counties in the North from the Catholic South. It turned into an international boundary when the South emerged from British rule in 1922 and became the Republic of Ireland in 1949. Tensions over the division persisted for years and while the Good Friday Agreement ended the bloodshed, the remnants of that conflict can still be seen in border towns such as Newry in the North, where British soldiers monitored the border from watch towers and patrolled the countryside with helicopters.

Damian McGenity, who lives in Drumintee, remembers the British Army all too well. As a boy growing up in the village in Northern Ireland, just south of Newry, he saw soldiers regularly stop cars to check for smuggled contraband, guns and Irish Republican Army (IRA) sympathizers. He can still point out where the watch towers stood and where the British soldiers slept in barracks behind barbed wire and massive walls. Today, the only way Mr. McGenity can find the border is by using a map on his phone, and he laughs at how the ragged line cuts through a house and between a church and its adjacent graveyard.

His own life is deeply enmeshed in both countries. He runs a 70-head cattle farm and works part-time in the local post office. His wife, Patricia, is from the South and works across the border in Monaghan for Ireland’s Environmental Protection Agency. Their four children attend school in Drumintee, but Ms. McGenity claims child benefits from Ireland and the couple pays taxes in both countries. Mr. McGenity sells cattle to producers in the North, but buys feed from suppliers in the South. He can’t imagine what life would be like for his family if border controls returned. “It would be a calamity,” he said. “Words are beginning to fail us.”

Kieran Kennedy is also scrambling. He’s the managing director of O’Neills Irish International Sports Co. Ltd., a Dublin-based maker of jackets, team jerseys and running shoes. The business employs roughly 1,000 people at two plants in Dublin and one in Strabane, in the North near Londonderry. The Strabane plant handles knitting, cutting, printing and some finishing, while the Dublin operations do dyeing and sewing. It’s not uncommon for shirts and jackets to go back and forth across the border eight times during manufacturing. And in Strabane, about 300 workers live in towns across the border in Ireland. Any holdup at the border would be “a disaster, a total disaster,” Mr. Kennedy said.

He knows what border controls are like. He started at O’Neills in 1979, and his first job was driving a van load of shirts from Strabane to Letterkenny in Ireland and down to Dublin. He had to fill out customs forms for both countries, get them checked on both sides of the border and pass through two sets of military guard posts. “It used to take me three hours to do 12 miles,” he said.

For Mr. Kennedy and many others, the solution is for Northern Ireland to remain in the EU’s customs union, which allows for the free movement of goods between member states. That would avoid the need for border checks on goods and allow travellers to continue to move freely under rules already in place in what’s known as the common travel area. The idea has won support from Ms. May, Ireland and EU negotiators, but there’s a catch. Many hard-line Brexit backers in Ms. May’s Conservative Party caucus reject the idea, calling it a betrayal of the spirit of Brexit because it will leave the United Kingdom tied to the EU. They’ve threatened to block parliamentary approval for any deal based on a customs union, and some are plotting to remove Ms. May as Leader. The Brexiters want the government to cut all ties to the EU and negotiate a trade deal similar to the Comprehensive Economic and Trade Agreement (CETA) Canada shares with the EU. Ms. May says she can’t do that because it would lead to a hard border in Ireland.

There’s another political problem for Ms. May. Northern Ireland’s Democratic Unionist Party (DUP) has also balked at the customs union idea. The DUP has only 10 members of Parliament in London but they carry huge political weight. The Conservatives don’t hold a majority of seats in the House of Commons and Ms. May relies on the DUP to stay in power. The DUP won’t agree to any arrangement that applies only to Northern Ireland, fearing it would be isolated and lead to the reunification of the island, something the party bitterly opposes. Party Leader Arlene Foster has called the DUP’s opposition to any special arrangement a “blood-red” line. Ms. May has proposed keeping all of the U.K. in the customs union for a set period of time, as a backstop until the country negotiated a trade deal with the EU. The EU says any backstop must be permanent if a trade deal couldn’t be reached, infuriating the hard-line Brexiters.

Darren Crawley just hopes someone finds a solution soon so he can keep his trucks moving. He’s a senior manager at McArdle Skeath, based just south of the border in Dundalk. The company has 35 trucks, about 20 of which make regular trips over the border, shipping food products to grocery stores. Any border delay could damage goods and increase costs. Already, several companies in the North have shifted operations to Ireland or opened warehouses in the South, in anticipation of border hassles.

Mr. Crawley, 32, grew up across the border near Newry and can barely remember the Troubles. “I think certainly, Ireland and Northern Ireland have moved on from that,” he said. But a hard border is also alien to him, and when asked what effect Brexit could have; he shrugged and replied: “We just live and hope.”