Opera singer Placido Domingo apologized to the women who have accused him of sexual harassment on Tuesday after an investigation by the American Guild of Musical Artists concluded he had behaved inappropriately with female performers.

One of the most feted and powerful opera stars of the modern era, Domingo said in a statement he had spent several months reflecting on the allegations made by his musical colleagues.

“I respect that these women finally felt comfortable enough to speak out, and I want them to know that I am truly sorry for the hurt that I caused them,” he said.

More than three dozen singers, dancers, musicians, voice teachers and backstage staff have said they witnessed or experienced inappropriate behaviour by the 79-year-old Spanish singer towards women at different opera houses over the last three decades.

A former prosecutor was hired to investigate the complaints last September by the American Guild of Musical Artists (AGMA), the labour union that represents performers and producers in opera houses and concert halls across the United States.

The union, of which Domingo is a member, announced its findings on Tuesday.

“The investigation concluded that Mr. Domingo had, in fact, engaged in ​inappropriate activity, ranging from flirtation to sexual advances, in and outside of the workplace,” the statement said. “Many of the witnesses expressed fear of retaliation in the industry as their reason for not coming forward sooner.”

Domingo said in his statement he now understood the women’s fear.

“While that was never my intention, no one should ever be made to feel that way,” he said. “I am committed to affecting positive change in the opera industry so that no one else has to have that same experience.”

The union declined to make public its full report. Its board of governors will take “appropriate action,” the union statement said. Union spokeswoman Alicia Cook declined to discuss what action it would take regarding Domingo.

Domingo had disputed the allegations when they were first reported by the Associated Press (AP) last year, forcing him to sever ties with some of the foremost musical institutions in the United States.

Women told the AP that Domingo, who is married, forced wet kisses on them, groped them and sought to pressure them into meeting him privately outside work for sex. They described it as a pattern of behaviour stretching back to the 1980s that had long been an open secret in the opera world.

Following the report, Domingo resigned as general manager of the Los Angeles Opera and pulled out of performing the title role in Verdi’s “Macbeth” at the Metropolitan Opera in New York.

LA Opera said it would comment once officials there had finished reviewing the union’s findings. The Met did not respond to a request for comment.

The allegations had less of an impact on his career in Europe, and he was still due to sing and conduct at performances in Vienna, Madrid, London, Moscow and Hamburg in the coming months, according to his website.

The Teatro Real in Madrid and the Royal Opera House in London confirmed that Domingo would still appear on their stages for “La Traviata” and “Don Carlo” this year. Milan’s Teatro alla Scala, where Domingo is scheduled to sing in “La Traviata” in November, declined to comment.

The Hamburg State Opera, where Domingo is booked to sing in March, said it took the complaints about Domingo “very seriously.” Michael Bellgardt, a spokesman for the opera house, said his colleagues “will also exchange information with the other institutions in Europe and then go public.”

As one of the Three Tenors singing group, Domingo, Jose Carreras and the late Luciano Pavarotti helped bring opera to a wider audience with concerts around the world in the 1990s. Domingo took to singing baritone roles later in his career.

The union will announce plans in the coming weeks to prevent sexual harassment in the future, Leonard Egert, national executive director of AGMA, said in a statement.

“AGMA’s efforts to protect its members will not end with this investigation,” Egert said. “AGMA is calling upon all companies in Opera, Dance, and Choral concert fields to join an industry-wide initiative to positively change the culture.” 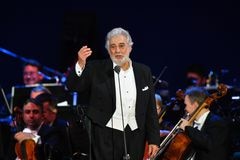 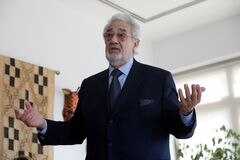