British Prime Minister Boris Johnson plans to push for a snap election Wednesday, after he lost a crucial showdown in Parliament that’s left his Brexit strategy in tatters and stoked confusion about when the country will leave the European Union.

A day of high drama at Westminster ended Tuesday night with a stunning setback for Mr. Johnson and the defection of a Conservative MP, which cost the government its working majority. MPs voted 328-301 to seize control of the parliamentary agenda from the government, clearing the way for opposition MPs to introduce legislation on Wednesday that will prevent Britain from leaving the EU on Oct. 31 without a withdrawal agreement.

Mr. Johnson had insisted for weeks that leaving on Halloween was a “do or die” commitment and that EU officials would only take Britain seriously if they believed the deadline was unalterable. Now, if the proposed law is approved, the Prime Minister will have to seek a three-month extension if he has not secured a deal by Oct. 19.

Tuesday’s vote was the first for Mr. Johnson since he became Prime Minister in July and he remained defiant, immediately moving to call a general election. “By the consequences of this vote, it means that Parliament is on the brink of wrecking any deal that we might be able to strike with Brussels,” he told MPs, adding that the proposed law will “mean more dither, more delay and more confusion.” He said it was now up to the public to decide.

“The people of this country will have to choose,” Mr. Johnson said.

However, he needs the support of two-thirds of MPs to call the election and Labour Party Leader Jeremy Corbyn said his party would not agree until the “no deal” legislation was in place. “There is no consent in this House to leave the European Union without a deal. There is no majority for ‘no deal’ in the country,” Mr. Corbyn told MPs. Mr. Johnson “wants to table motion for a general election. Fine, get the bill through first in order to take ‘no deal’ off the table.”

Tuesday’s vote left Mr. Johnson politically battered and exposed the deep divisions within his Conservative Party caucus. ​A total of 21 Tory MPs who defied the Prime Minister were effectively expelled from caucus. Mr. Johnson has also infuriated many MPs by moving to suspend Parliament next week until Oct. 14, cutting off parliamentary scrutiny of his Brexit plans.

The tactics seemed to backfire as the number of Tory recalcitrants was higher than many expected and included Winston Churchill’s grandson, 71-year-old Tory MP Nicholas Soames. Some MPs quit the party before being kicked out while one, Phillip Lee, crossed the floor of the House of Commons to join the Liberal Democrats just as Mr. Johnson was addressing MPs earlier in the debate.

Mr. Lee’s defection cost the government its slim working majority, which had been down to just one seat. "This Conservative government is aggressively pursuing a damaging Brexit in unprincipled ways,” Mr. Lee said in a statement. “It is using political manipulation, bullying and lies. And it is doing these things in a deliberate and considered way.” The expulsions included several former cabinet ministers such as Philip Hammond and Ken Clarke, who has been a Tory MP since 1970.

But even if the no-deal legislation is adopted, it will only add more uncertainty to the Brexit process as it sets up another potential delay. The country was supposed to leave the EU last March, but Parliament has been unable to agree on any approach. MPs have been divided among several options, ranging from holding a second Brexit referendum to remaining in the EU. All of the confusion has caused havoc with parts of the economy and confounded investors, who have sent the value of sterling down close to levels not seen since the 1980s.

Mr. Johnson has been adamant that he can still rework a withdrawal agreement reached by his predecessor, Theresa May. That deal was rejected by Parliament three times mainly because of concerns about the controversial backstop provision. It would ensure the Irish border remained open by keeping Northern Ireland aligned with EU regulations tying the rest of Britain to a form of the bloc’s customs union. Mr. Johnson wants to scrap the backstop because it keeps the country bound to the EU. But EU officials have refused, saying it’s an important component of the deal. They have called on Mr. Johnson to propose alternatives.

There is also growing restlessness among the public about how long Brexit is taking, given that the country voted to leave the EU more than three years ago. Hundreds of pro- and anti-Brexit protesters gathered outside Parliament on Tuesday, all hoping to send a message to MPs.

“They have been sitting on Brexit for three years and it’s long overdue that they implement what we voted for,” said Val Bateson as she gestured toward Parliament. Ms. Bateson carried a large red sign that read “We voted leave.” When asked if she believed Mr. Johnson’s pledge to pull out on Oct. 31, Ms. Bateson said she was skeptical. “I don’t know exactly how Johnson plans to play it. I think he says … that he is absolutely determined to take us out on Oct. 31st and I hope he sticks with that. … I think that with Boris you don’t 100-per-cent know what you are going to get.”

Across the street, Ireen Esmann was manning a table lined with cakes, chips, crackers and cupcakes for people who support Britain remaining in the EU. Ms. Esmann is from the Netherlands and she has lived in Britain for 39 years. “Now I need to confirm that I can stay here,” she said as she sported a T-shirt that read “EU mums against Brexit!” Ms. Esmann said she was furious at Mr. Johnson’s tactics and his willingness to accept a no-deal Brexit. “This country is being destroyed by a certain faction of the population,” she said. “I’m absolutely disgusted. Democracy is being made a mockery.” 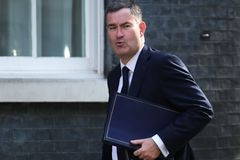 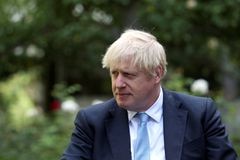 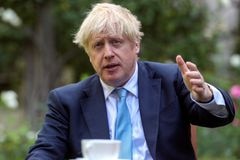