Over the last 50 years, Courtenay Jenvey witnessed his community transform from a quaint mountain town with a handful of stop signs into a bustling mix of retirees and young families attracted by affordable homes nestled among tall trees.

But on the morning of Nov. 8, as Mr. Jenvey held the encroaching flames at bay with a garden hose – a neighbour’s trembling Labrador retriever hiding in between his legs – he saw his town turned to ash in mere hours.

“I’ve watched this place grow,” said the 69-year-old heavy equipment operator, sitting on his couch in one of the few homes left standing in Paradise, Calif. “And now I’ve watched it flatten.”

It has been a little more than two weeks since the deadliest fire the U.S. has seen in more than a century swept through this northern California town of about 27,000. Firefighters scored a major victory on Sunday, declaring the Camp Fire 100 per cent contained.

But the flames that roared up out of the Feather River Canyon have blazed a trail of unfathomable destruction, wiping out an area almost as large as the city of Toronto, levelling close to 90 per cent of homes in Paradise and half of the town’s businesses.

At least 85 people are dead. Those who survived are starting to take stock of the sheer scale of the devastation.

Emergency crews have begun clearing trees and restoring power lines. Investigators are using a new type of DNA technology to identify human remains in as little as two hours. They have tentatively identified 54 of the dead, ranging in age from 21 to 95 years old.

While they have lifted some evacuation orders, police cautioned residents it will likely be months before it is safe to return to what is left of their homes. The blaze left behind a sludge of toxic and radioactive chemicals, and the heavy rains that finally extinguished the fire have raised the risk of mudslides.

Then there are nearly 250 people who are still missing.

Friends and family are going to great lengths, driving long distances to desperately search for their loved ones. Cathy Livingston Stegall drove up from the San Francisco Bay Area a week ago to search for a close family friend, Ed Nored.

A truck driver and Vietnam War vet, Mr. Nored moved to Magalia, north of Paradise, about 15 years ago, where he built a renowned collection of flight uniforms from the Second World War.

Ms. Livingston Stegall confirmed her friend’s home was destroyed, but she wasn’t able to find him. Shelter workers told her they would give Mr. Nored her number if he called. “But he’s not calling,” she said. “And it’s been two weeks.”

At the Red Cross shelter set up in a church in nearby Chico where Ms. Livingston Stegall has been staying, a bulletin board is papered with photos, poetry and handwritten notes from people searching for their loved ones. ”Looking for Julian Binstock and his dog Jack,” reads one. Another says: “Sheila Santos call your kids.”

As unthinkable as it seems that an entire town could be erased in a matter of hours, the people who lived here say they worried that one day such a fire would come.

Paradise is tucked into the foothills of the Sierra Nevada Mountains, on a ridge surrounded by canyons. The same features that made it such a peaceful place to live were also what made it so dangerous.

“It’s for people who like to live in a forest,” said Kevin Jays, one of the few Paradise residents who decided not to evacuate. “But sometimes forests burn.”

Paradise has had close calls before. In 2008, a fire burned a nearly identical path up from the same canyon, but never crossed into town. “Anybody that’s ever lived here any amount of time knew that this event would eventually happen,” Mr. Jenvey said. “We just didn’t know when.”

The town thought it was prepared for the worst. Local officials developed a detailed evacuation plan and held drills to make sure it worked. “But it was never anticipated that we would have to evacuate the whole town all at once,” said Paradise Mayor Jody Jones, who lost her home in the fire.

Survivors’ descriptions of the fire tell the story of a harrowing day. The early morning sky that went from blue, to red, to black. The roar of the fire that came barrelling like a freight train up from the canyon, propelled by winds gusting more than 80 km/h. The smoke that rolled in from the northeast and then spun around 180 degrees until the fire was closing in from all sides. The tree branches bursting into a shower of sparks, raining down foot-long embers. The relentless thunder of exploding gas lines, propane tanks and electrical transformers. The panic that set in as people realized they would be stuck in traffic for hours as flames encircled their vehicles. The pickup trucks flying along the shoulder of the road, their contents ablaze.

“If God wants us dead, we’ll die,” Siran Joundourian recalled telling her neighbour as their car crawled along one of the few routes out of town. “There was no escape.”

The fire appeared so quickly that Rick Granada, 69, and his son Dan, 35, had no time to get to their vehicles. They grabbed a few belongings, their neighbour’s dogs and headed out on foot, stopping so Mr. Granada could retrieve a cane from inside a nearby garage and fashion a dog leash from the cord of a lamp he found in a neighbour’s driveway.

For Mr. Granada, whose home was destroyed, it is still too early to talk about what to do next. “It was a beautiful area and to see something like this happen ... ” he said, his voice trailing off. “I try not to think about it anymore.”

For others, however, the talk is turning to how to rebuild.

Ms. Jones, the mayor, lists many of the buildings left standing – the town hall, police and fire stations, the high school, the hospital, two shopping centres, the grocery store, the library, the Starbucks. “There are things to build on,” she says.

There are other green shoots of hope. Ms. Joundourian learns her home, which she built herself and surrounded with dozens of fruit trees to remind her of her native Lebanon, is still standing. Ms. Livingston Stegall gets word that her friend Mr. Nored survived, having managed to save just two of his large collection of military flight suits.

From his home near the centre of Paradise, Mr. Jays could see emergency crews stapling green signs to the fences of houses that survived, signalling they are safe for re-entry. “Every time one of those green placards goes up, it means that the town is not totally destroyed,” he said.

On the southwestern edge of town, watching the news from his home on a generator-powered television, his wife Cheryl by his side, Mr. Jenvey could almost convince himself that his town was still standing.

“If I didn’t look out the sides and see the devastation,” he said, “this would be just a typical day in Paradise.” 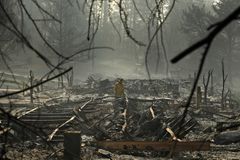 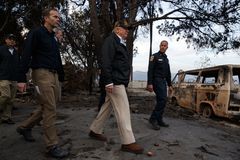 California wildfire deaths rise to 71 ahead of Trump’s visit
November 16, 2018 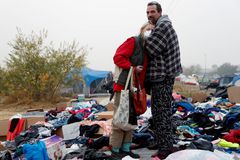