As the voices of a choir soar to a crescendo, Ferdinand Marcos Jr. raises a fist to his chest and speaks into the camera: “Together, we will rise again.”

The son of the late Philippines dictator with whom he shares a name, the younger Marcos, known as Bongbong, is poised to become the country’s next president when Filipinos go to the polls on May 9. Should he be successful, it will cap one of the most remarkable resurrections in Southeast Asian political history, as the once loathed and humiliated Marcos clan returns to power 36 years after protesters drove Ferdinand from office.

Mr. Marcos has benefited from a campaign to reshape the narrative around the elder Marcos, casting him not as a brutal dictator and – along with his wife, Imelda – icon of kleptocracy, but instead as a patriotic hero who oversaw a period of economic stability and growth for the Philippines. Amid COVID-19 struggles and stagnation, many hope to see a return to this mythical golden era.

While Mr. Marcos’s supporters argue that he should not be judged for the sins of his father, opponents fear he will continue an authoritarian trend in the Philippines seen under current President Rodrigo Duterte, who launched a brutal war on drugs, locked up critics and attacked the free press.

According to Richard Heydarian, author of a book on Mr. Duterte’s presidency, this month’s election will determine whether the past five years were “an anomaly, or the harbinger of a new order altogether.”

Mr. Marcos has been boosted by the endorsement of Sara Duterte, the President’s daughter, who is running for vice-president (elected separately in the Philippines). Polling in the final week suggests he could win in a landslide, a result Mr. Heydarian said could set the stage “for a complete overhaul of the country’s besieged democratic institutions.”

The resurrection of the Marcoses has been a decades-long campaign, beginning when the family returned to the Philippines in 1992, three years after Ferdinand’s death in exile in Hawaii. That year saw Imelda unsuccessfully run for president, while Mr. Marcos was elected to Congress from the family’s traditional stronghold of Ilocos Norte, on the northern Luzon island. But while the family’s fame and money – its fortune remained substantial even as prosecutors clawed back billions in looted funds over the years – could generate support locally, Imelda’s failure nationally seemed to suggest there was a limit to their resurgence.

When Edwin Lacierda was sent a video on YouTube extolling the Marcoses in 2010, he dismissed it. “It was talking about how the Marcos years were a golden era for the Philippines,” he said. “I told my colleague nobody is going to believe that. How could they?”

Mr. Lacierda was working in the administration of then-president Benigno Aquino, whose parents were prominent opponents of the Marcos regime. As a younger man, Mr. Lacierda took part in the 1986 People Power Revolution that drove the dictator from office.

“I forgot the fact that there was a completely new generation,” he said. “While we were going about the tasks of government, the Marcoses quietly rehabilitated themselves through the new social-media platforms.”

Of the Philippines’ more than 65 million eligible voters, around 56 per cent are under 41, according to the national Commission on Elections.

The country is also one of the most online in the world, with some 40 per cent of people saying they get most of their news through Facebook or other social platforms.

Rappler, an independent publication that has frequently been a target of Mr. Duterte, has documented how the Marcos family used social media to improve its image.

This has ranged from straightforward denial of atrocities, to wild claims about a supposed stash of gold, hidden by the late dictator, that could help revive the Philippines economy.

In a speech accepting the Nobel Peace Prize last year, Rappler founder Maria Ressa said Bongbong has “built an extensive disinformation network” that is “literally changing history in front of our eyes.”

This effort has only been boosted by Mr. Marcos’s alliance with Sara Duterte – once a potential challenger for the presidency – joining two of the country’s most powerful online operations.

Rodrigo Duterte came to power in 2016 partly thanks to his success on social media. Since being elected, he has used Facebook and other platforms to rally support for his controversial war on drugs and attack critics, directing what some observers have described as a “troll army” against any who question him.

One of his foremost targets has been Senator Leila de Lima, a former chairperson of the Commission on Human Rights who oversaw multiple hearings into extrajudicial killings and other abuses linked to Mr. Duterte’s drug war.

“The character assassination against her has been ongoing for five years,” said Dino de Leon, a spokesman for Ms. De Lima. “She has been attacked every day by online trolls. She was made a symbol that anyone who would dare cross the administration, dare get in the way of the war on drugs, would suffer the same fate.”

In 2017, Ms. De Lima was jailed on drug charges that she says are trumped up, part of the President’s “political vendetta.” This month, multiple witnesses recanted testimony against Ms. De Lima, leading to calls for the government to throw out her conviction.

Ms. De Lima is running for re-election, a campaign that has been doubly difficult as a result of her imprisonment and the mass of disinformation circulating about her, Mr. De Leon said.

Ms. De Lima has endorsed Mr. Marcos’s chief rival, Vice-President Leni Robredo, who is trailing by about 20 percentage points in most polls. According to fact-checking consortium Tsek.ph, Ms. Robredo has faced an “unstoppable” wave of “false information” produced by supporters of Mr. Marcos.

Bongbong’s messaging has been short on policies and big on sentiment, promising “unity” and national rejuvenation. Most expect him to continue Mr. Duterte’s drug war and shield the President from any future prosecution by the International Criminal Court, which is examining extrajudicial killings.

Andrea Chloe Wong, a former government foreign-affairs analyst, said that while Mr. Marcos may seek to continue Mr. Duterte’s often authoritarian political agenda, he could struggle to push it through or sell it to the public.

In particular, while Mr. Marcos is seen as more sympathetic toward Beijing than Ms. Robredo, any attempts to change Manila’s foreign policy on the South China Sea and other issues may run up against nationalistic public opinion, which has often caused Mr. Duterte to flip-flop on the same issue.

“He doesn’t have the charisma, the folksy appeal of Duterte,” she said. “So his administration may be more muted, he wants to get all the same things done, but he might not be as strong and as aggressive as Duterte.”

One key priority, analysts agree, will be to complete the rehabilitation of the Marcos name, potentially scrapping anniversaries marking the overthrow of the dictatorship and ending any outstanding criminal and civil cases against the family.

“The biggest issue will be whether he will be as corrupt as his father,” Mr. Lacierda said. “The jury’s out on that until he takes office. There’s a presumption against him, of course, because of his father, but for the good of the country, I hope that won’t be the case.” 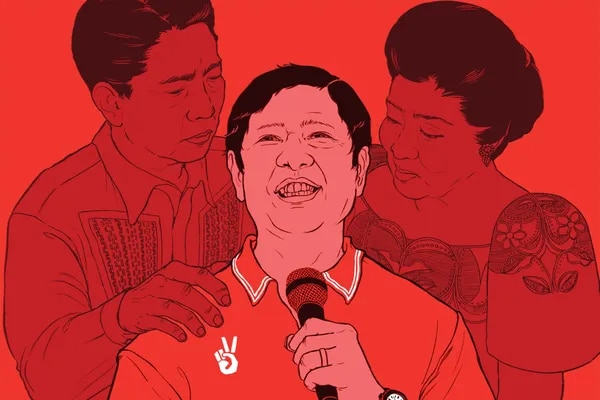 If you’re concerned about the state of democracy around the globe, you should pay attention to what is happening in the Philippines, writes Filipino author Miguel Syjuco.

Philippines 2022 election: The candidates and key issues ahead of Monday’s presidential vote
May 5, 2022