A surge in COVID-19 infections in Britain has led to what’s being dubbed a “pingdemic,” which is causing food shortages and public-transit delays, and left some police departments scrambling to respond to calls.

The chaos stems from a rapid rise in alerts sent through the National Health Service’s COVID-19 app, which warns users that they have been in close contact with someone who tested positive for the virus. Anyone pinged by the app is supposed to self-isolate for 10 days.

The NHS sent out more than 618,000 alerts last week, the highest total since the app came out last fall. The number of pings has risen fourfold in the past month as Britain copes with a wave of infections arising from the Delta variant.

With so many workers forced to stay at home, many businesses and public services have struggled to keep operating. This week the restaurant chain Pret a Manger closed 17 outlets and British Petroleum said some of its gas stations had to shut because of supply problems. Marks & Spencer warned that it may have to cut opening hours at some stores because of a lack of staff while other grocers – including Sainsbury’s, Tesco, Lidl and Morrisons – reported shortages of a range of products such as bottled water, vegetables and fish.

“We are struggling to function at the moment,” Richard Walker, the chief executive of food retailer Iceland, told ITV. Mr. Walker said 1,000 of the company’s 30,000 employees were isolating after being pinged, roughly double its normal rate of absenteeism.

“Government needs to wake up to this,” said Rod McKenzie, a spokesman for the Road Haulage Association, which represents the trucking industry. “I cannot underplay how serious this situation is.” Mr. McKenzie said Britain was already facing a shortage of 100,000 drivers and the pingdemic has made things worse.

The London underground also had to temporarily close three lines this week because of crew shortages and several local councils have cancelled garbage collection because of employees self-isolating. Some police departments have also warned that response times could be affected.

“We suddenly find ourselves cancelling rest days and cancelling leave and bringing officers in from other shifts to cover where we have got the gaps,” said Steve Turner, the police and crime commissioner in the Cleveland region of northern England. “However, our call times will go up, we will miss some calls we would normally pick up because we have less resilience in the call centre and all of these things will have a knock-on effect for the Cleveland public,” he added in a BBC interview.

The flurry of pinging has raised concerns among health experts that people will delete the app or ignore the alerts. That could further the spread of the virus especially since the government removed all remaining COVID-19 restrictions this week, including mandatory face mask regulations.

“The reason that so many people are receiving notifications is simple: We have a highly transmissible virus that is being allowed to spread throughout the country with the bare minimum of mitigation,” said Stephen Griffin, an associate professor of medicine at the University of Leeds. “The tracing of close contacts for those knowingly infected and/or exposed to the virus is a mainstay of infection control.”

According to NHS figures, the app has been downloaded 26.8 million times, but it’s not clear how many people are using it properly. Self-isolation isn’t a legal requirement but the government has strongly advised employees and employers to comply with the app.

However, a YouGov poll this week of 1,761 cellphone users found that 10 per cent of those who downloaded the app have deleted it and 31 per cent haven’t installed it at all.

The government has promised to ease the self-isolation rules on Aug. 16 and allow anyone in England who has been fully vaccinated to avoid quarantine and undergo two days of testing instead. Some businesses and services, notably in health care, can also apply for an immediate exemption. Scotland, Northern Ireland and Wales are moving more gradually to lift restrictions.

Prime Minister Boris Johnson is coming under fire from many of his backbench MPs to make the changes immediately. Unless the 10-day isolation is dropped for fully vaccinated people “we risk losing social consent for this very, very important weapon against the virus,” Jeremy Hunt, a Conservative MP and former health secretary, told the House of Commons on Thursday.

Paul Hunter, a professor of medicine at the University of East Anglia, said there was little value in quarantining people who have been vaccinated. “The extremely low benefit for quarantine of casual contacts will be pretty much zero if you are fully vaccinated or have recovered from a previous known infection with COVID,” Dr. Hunter said Thursday. “I can see no value in waiting another four weeks to lift this requirement.”

Mr. Johnson has been self-isolating this week after coming in contact with Health Secretary Sajid Javid, who has tested positive for the disease. During a parliamentary debate on Wednesday, where he appeared virtually, he sympathized with others who have been pinged but said the rules will remain until Aug. 16. “I just must remind everybody that isolation is a vital tool of our defence against the disease.” 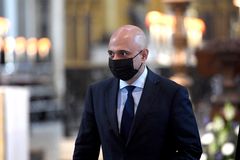 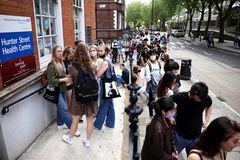 Britain’s economic rebound slowed in May despite further easing of COVID-19 restrictions
July 9, 2021 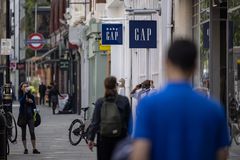