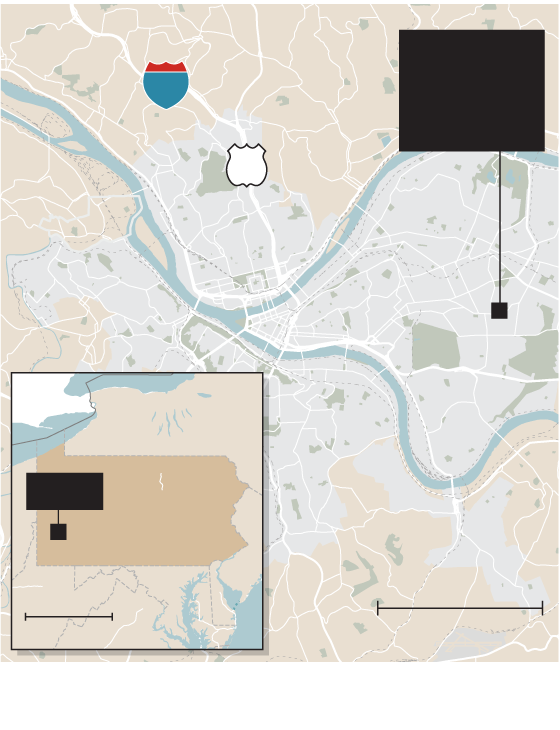 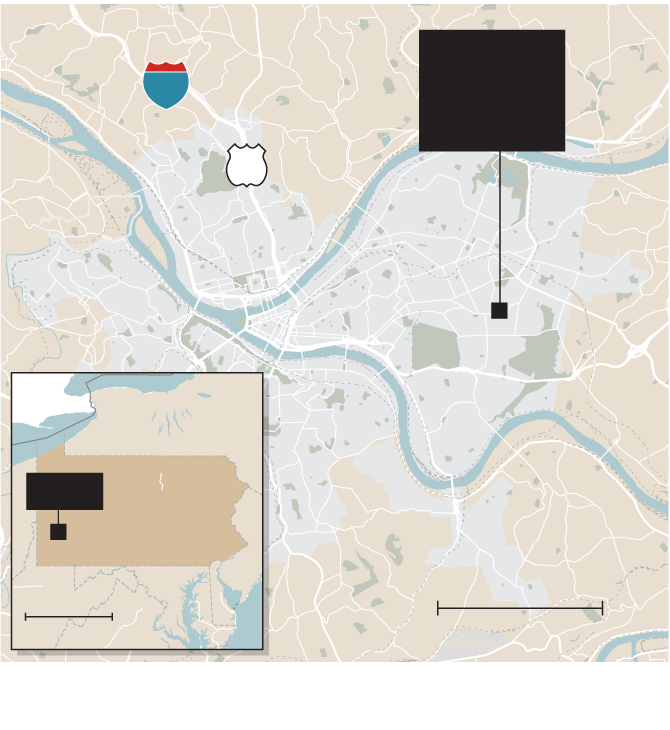 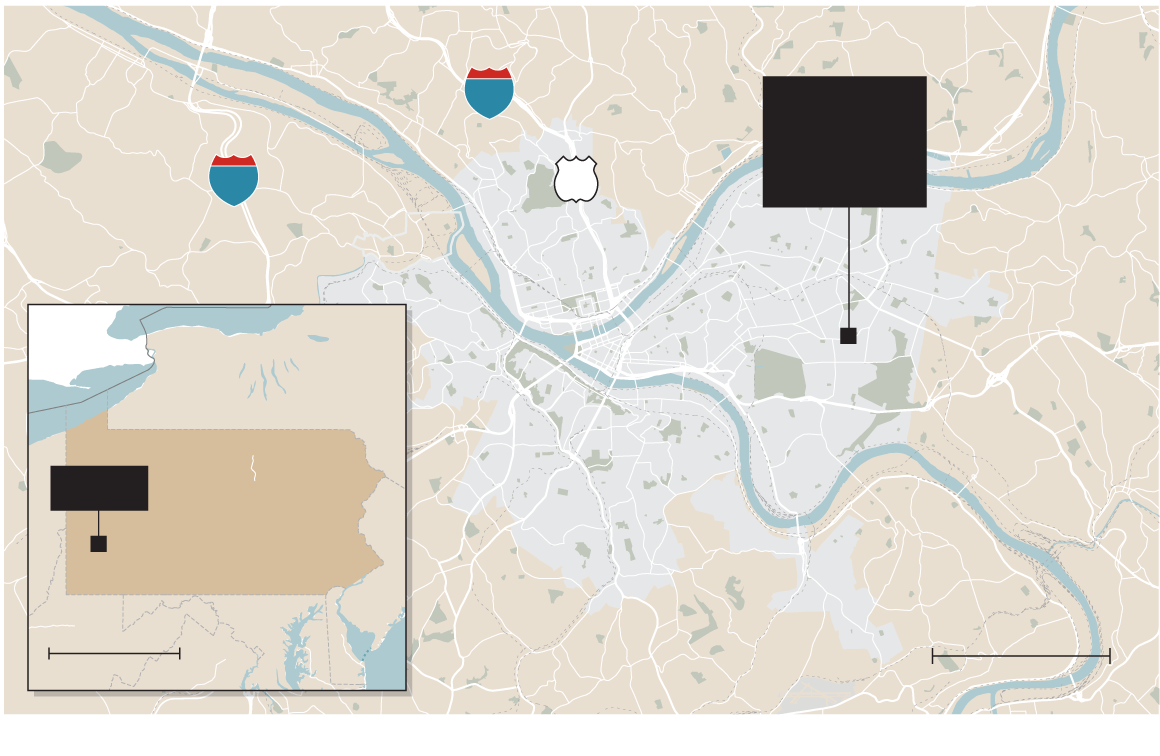 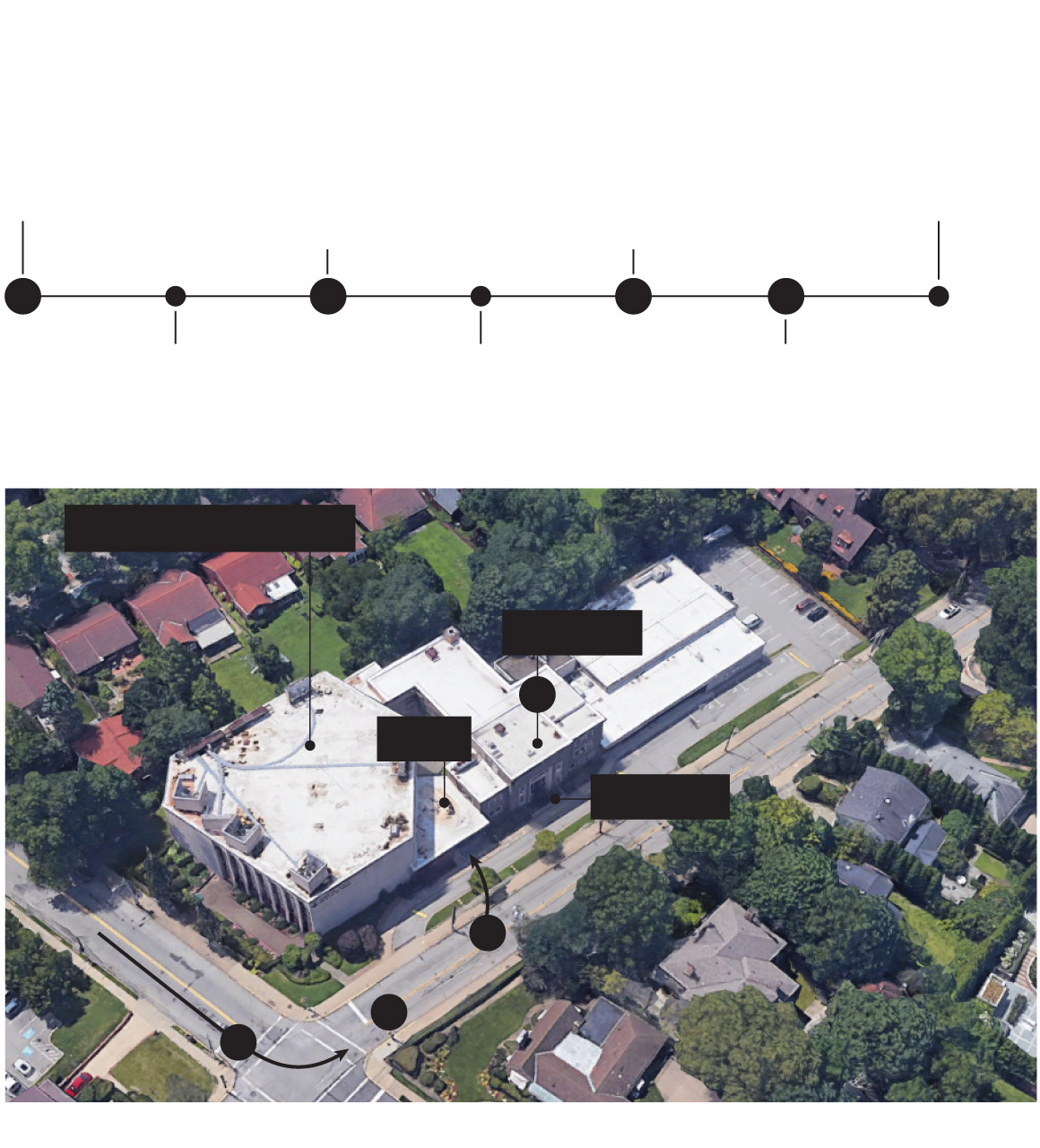 Saturday’s massacre took place at the Tree of Life synagogue in Squirrel Hill, a residential neighbourhood of Pittsburgh where the Jewish community has deep roots. The synagogue is home to three congregations who were beginning Shabbat services that morning; one was preparing for a bris, a baby’s circumcision ritual.

The gunman, armed with an AR-15 rifle and other weapons, burst in and opened fire in the lobby. In the basement, the New Light congregation heard crashing sounds from upstairs, then saw a body on the staircase, eyewitness Barry Werber, 76, told Associated Press. The worshippers hid in a supply closet as the gunman entered the darkened basement room and looked around. “I can’t say anything, and I’m barely breathing,” Mr. Werber said. “He didn’t see us, thank God.”

More worshippers were shot and killed until the first police officers arrived. The gunman opened fire on them, barricading himself in a third-floor room. The gunman was injured in armed exchanges with police before he eventually surrendered, shouting anti-Semitic statements to police and the emergency-room staff who treated him. “Suspect’s talking about, uh, all these Jews need to die,” The New York Times reported an officer as saying. “The suspect keeps telling about killing Jews, he doesn’t want any of them to live.”

Officials released the victims' names the day after the attack. The mostly elderly victims included retired academics and accountants, a family physician and two developmentally disabled brothers who were friendly fixtures at Shabbat worship services. One of those killed, Joyce Fienberg, grew up in Toronto, where she met her husband as an undergraduate. Here are fuller profiles of the dead.

Who he is: Robert Gregory Bowers, 46, was a long-haul trucker who worked for himself, U.S. Attorney Scott Brady said on Sunday. Little else was known about the suspect, who had no apparent criminal record.

What he believes: Mr. Bowers expressed hatred of Jews during the rampage and later told police that “I just want to kill Jews” and that “all these Jews need to die,” authorities said. Just moments before the synagogue shooting, he is believed to have posted a final social-media rant on the platform Gab denouncing HIAS, a Jewish refugee settlement agency that Mr. Bowers said “likes to bring invaders in that kill our people.” Analysts who follow the far right say the fixation some extremists have with HIAS appears to be fuelled by anti-Semitism and caustic rhetoric about an immigrant caravan trudging slowly toward the United States. Specifically, they believe Mr. Bowers ascribed to the “white genocide” conspiracy, which holds that Jews are prominent among the forces seeking to destroy the “white race” by bringing in non-white people.

His weapons: Officials say Mr. Bowers was armed with a rifle and three handguns when he walked inside the synagogue. Mr. Bowers had a license to carry firearms and legally owned his guns, a law-enforcement official told Associated press on condition of anonymity on Sunday.

What will happen to him: Mr. Bowers is charged with 11 counts of criminal homicide, six counts of aggravated assault and 13 counts of ethnic intimidation. Mr. Brady says federal prosecutors are seeking approval to pursue the death penalty, which would require approval from U.S. Attorney-General Jeff Sessions.

Squirrel Hill, the neighbourhood shaken by Saturday’s tragedy, is a hub of American Jewish life, where immigrants have put down roots since the Industrial Revolution, columnist David Shribman explains in a dispatch to The Globe and Mail from the city. The immigrant enclave has gotten more diverse over the years, but the kosher restaurants and clocktower with Hebrew letters still testify to its past. “Pittsburgh, and especially Squirrel Hill, was the centre of Jewish identity not only for Pittsburgh but in a way for the entire country,” historian Steven R. Weisman said in an interview. “It is not possible to discuss American Jewry without discussing Pittsburgh.”

When Squirrel Hill residents gathered to mourn over the weekend, Jewish communities across the city, the country and the world also held vigils and services in solidarity. Events were organized in Canadian cities including Montreal, Ottawa, Halifax and Vancouver.


The bigger picture: Anti-Semitism and violence

The attack in Pittsburgh is not being seen as an isolated incident of ant-Semitism. In recent years, the United States has seen a growing wave of politically charged hate speech against Jewish, black and immigrant Americans. White nationalist groups, several of whom supported U.S. President Donald Trump’s rise to power, last year rallied in the streets of Charlottesville, Va., chanting “Jews will not replace us”; and this year, amid U.S. midterm elections, a Florida man mailed pipe bombs to prominent Democrats and party supporters including George Soros, a Jewish Hungarian-American billionaire who is often the target of far-right conspiracy theories.

The U.S.-based Anti-Defamation League has documented rising numbers of hate crimes against Jews in recent years, as shown in the charts below. Pittsburgh and Squirrel Hill have not been immune: In a 2017 report on Pittsburgh’s Jewish community by Brandeis University, about one in six respondents said they had directly experienced anti-Semitism in the preceding year, mostly involving comments, insults, jokes and stereotypes. One told of a campaign sign for Donald Trump being put in their yard with a note saying it was from their “neighbourhood youth Hitler.”


What Trump has said

Mr. Trump, shrugging off thousands who protested his visit as unwelcome, offered condolences on Tuesday at the Pittsburgh synagogue. The presidential visit came as thousands of mourners attended the first funerals for victims of Saturday’s massacre, the deadliest attack ever on American Jewry. The president, who opponents say has stoked a toxic political climate conducive to acts of violence, paid a brief visit to the Tree of Life temple where the shooting rampage occurred, accompanied by first lady Melania Trump. They were greeted by Rabbi Jeffrey Myers, who led them inside the temple where they lighted candles for the victims. Emerging about 18 minutes later, the couple walked to a memorial outside the building, where the first lady placed a flower and the president placed a small stone on a marker for each of the dead. Trump’s motorcade left after about 30 minutes at the synogogue, with the president making no public remarks.

But in other public remarks since the shooting, Mr. Trump has also stirred criticism that he is not doing enough to condemn white nationalism, particularly among his political supporters. On Monday he was directing his anger at the news media instead, saying the “great anger” in the United States was the fault of inaccurate news reporting. It echoed his response to the previous week’s string of bomb-by-mail attacks on Democrats, which he also blamed on a toxic effect by “fake news” on the political discourse.

...This evil Anti-Semitic attack is an assault on humanity. It will take all of us working together to extract the poison of Anti-Semitism from our world. We must unite to conquer hate.

There is great anger in our Country caused in part by inaccurate, and even fraudulent, reporting of the news. The Fake News Media, the true Enemy of the People, must stop the open & obvious hostility & report the news accurately & fairly. That will do much to put out the flame...

....of Anger and Outrage and we will then be able to bring all sides together in Peace and Harmony. Fake News Must End!

Mr. Trump also attracted criticism for suggesting the synagogue shooting could have been prevented if an armed guard had been present inside. This echoed past statements the President has made when questioned about gun control in the aftermath of a mass shooting.

Over the weekend, Mr. Trump suggested it was his duty to stay on the midterm campaign trail despite the synagogue shooting and the mail bombs. “With what happened early today, that horrible, horrible attack in Pittsburgh, I was saying maybe I should cancel both this and that," he said at a rally in Illinois on Saturday. “And then I said to myself, I remembered … the New York Stock Exchange on September 11th, and the New York Stock Exchange was open the following day.” That was not true: After the Sept. 11 attacks, the NYSE and Nasdaq exchanges remained closed until Sept. 17, the longest shutdown since 1933.


Political reaction around the world

Canadians’ hearts are with the Jewish community in Pittsburgh today, as they endured a horrific anti-Semitic attack while at prayer. May the families of those murdered be comforted, and may the injured recover quickly and fully.

Very sad to see the tragic events in Pittsburgh today. My heart goes out to the families and loved ones of the victims. We must continue to work together to defeat anti-semitism and bigotry in all its forms. https://t.co/skEKN4jeiO

British Columbians’ hearts are broken hearing the devastating news of the shooting at the Tree of Life synagogue in Pittsburgh. Everyone should feel safe in a place of worship.

I was heartbroken and appalled by the murderous attack on a Pittsburgh synagogue today: pic.twitter.com/NBMO31lMU2

I strongly condemn this horrific act of antisemitism in Pittsburgh. All my thoughts to the victims and my sympathy for their beloved ones. https://t.co/pL9z72PdlL

"I’m deeply shocked by the reports of a shooting at a synagogue in the US today. Our thoughts are with the Jewish community in Pittsburgh and all those affected by this sickening and cowardly act." – PM @theresa_may

Mira Sucharov: Anti-Semitism isn’t back. It never went away

Marie-Claude Landry: After Pittsburgh, Canadians must remember: Hate has no borders

Based on reporting by Associated Press, with reports from Globe staff, Reuters and The New York Times News Service