Rubber bullets and tear gas were wielded by security forces in two of Africa’s biggest countries on the first day of tough new restrictions meant to keep millions of people at home during the COVID-19 pandemic.

Thousands of police and soldiers were deployed on Friday to enforce a national lockdown in South Africa, while anti-riot police were mobilized in Kenya to impose an overnight curfew, as cases of the coronavirus continued to soar across the African continent.

In both countries, there were reports of security forces assaulting citizens and using excessive force to clear the streets. A number of South Africans were hit with rubber bullets or beaten by soldiers, while hundreds of Kenyans were assaulted by police who fired tear gas and swung batons, according to video clips and news reports.

The reports demonstrate the difficult balance between health measures and civil liberties in two of Africa’s leading democracies, which have introduced some of the world’s strictest controls on public movement as a result of the COVID-19 crisis.

In South Africa, where a 21-day national lockdown began on Friday, the government has authorized an emergency military deployment of 2,820 soldiers for up to three months to enforce the lockdown and to fight the pandemic. In addition, almost 24,000 police have been posted at 172 roadblocks and other sites.

President Cyril Ramaphosa, wearing a camouflage military uniform for the first time in his presidency, addressed a unit of soldiers on Thursday night and urged them to act “in the most understanding way, in the most respectful way, in the most supportive way.” He said the soldiers must be “a force of kindness” rather than “a force of might.”

But a video clip on South African social media on Friday contained a group of soldiers beating and kicking a man, while police watched silently. The video showed the soldiers had approached a small group of men who were drinking beer on a sidewalk. A soldier smashed one of the beer bottles and then assaulted the man.

South African media reported on Friday that the police were using rubber bullets to clear the streets in some places. Two commuters, including a cleaner at a doctor’s office, were shot and injured by rubber bullets in central Johannesburg, according to a report in the Mail & Guardian newspaper.

Elisha Kunene, a lawyer in Johannesburg, tweeted that he was watching the police clearing homeless people from his street when eight police officers and three security guards with assault rifles “barged into our house, patted us down, poured our liquor into the fireplace, searched the whole house, threatened to break my face, and spent a while interrogating and berating us.”

South Africa’s national lockdown is stricter than many other countries. The sale of alcohol and cigarettes is prohibited, meal delivery has been banned, and citizens are not permitted to leave their homes for a walk or a jog. Nobody is allowed on the streets except for those conducting essential jobs or shopping for groceries or medicine.

On the first day of the lockdown, police reported that they had arrested 55 people for violations.

Police Minister Bheki Cele, asked about the reported abuses, denied any excesses. “Wait until you see more force,” he told a media briefing on Friday night.

Most South Africans, fearful of the fast-expanding pandemic, have strongly supported the lockdown and the military and police deployment. Mr. Cele said the police have been deluged with calls from citizens reporting violations of the lockdown and demanding arrests.

South Africa has more confirmed cases of the coronavirus than any other African country. The number jumped to 1,170 on Friday, up from 927 on Thursday.

In Kenya, where 31 confirmed cases have been reported, the government has imposed a nightly curfew from 7 p.m. until 5 a.m., beginning on Friday night. Only health workers and other essential service providers are exempt.

Videos and photos featured the police lobbing tear-gas canisters and clubbing people with batons in the coastal city of Mombasa to clear the streets in advance of the curfew. One video showed a police officer kicking and beating a television cameraman. 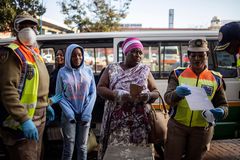 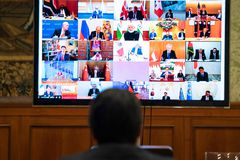