The interior minister of Belarus warned that authorities wouldn’t hesitate to approve the use of live ammunition on protesters if it’s necessary to quash more than 2 1/2 months of demonstrations against the re-election of the country’s authoritarian president.

In a YouTube interview released Wednesday, Interior Minister Yuri Karayev said he thinks that police have been too tolerant of protesters and that they will take a tougher line. He noted that many officers have been injured during the post-election unrest.

“A war is going on. There has been an open and blatant pressure fuelled by impunity and lack of fear,” Karayev said.

He added that police would continue to rely mostly on non-lethal weapons but would use firearms if they faced a violent response from protesters.

“A police officer was nearly killed, he was being strangled but he only fired warning shots in the air,” the minister said, adding that he was working to change that attitude and was telling police that their lives depend “on how quickly you pull your gun.”

Since the country’s Aug. 9 presidential election, Belarus has been rocked by the largest and most sustained protests in President Alexander Lukashenko’s 26-year rule. Official election results gave him a landslide victory to a sixth term. The demonstrators have rejected the official results as a sham and demanded Lukashenko’s resignation.

Police detained thousands and brutally beat hundreds of peaceful protesters during the first few days of protests, triggering international outrage and prompting the U.S. and the European Union to introduce sanctions against Belarusian officials accused of vote fraud and the clampdown on demonstrations.

Lukashenko’s main election challenger, Sviatlana Tsikhanouskaya, who left for Lithuania under pressure from authorities after the vote, had urged a nationwide strike if Lukashenko did not resign, release political prisoners and stop the police crackdown.

She gave the go-ahead for the strike to begin Monday after police in Minsk and other cities once again dispersed demonstrators with stun grenades and tear gas. Sunday’s rally in Minsk was one of the largest in weeks, drawing nearly 200,000 people, according to a human rights centre’s crowd estimate.

The strike, however, has failed to get enough traction to stymie production at major state-run plants and factories that make up the core of the Belarus economy. Some factory workers walked off the job, thousands of students and retirees marched in Minsk, and some small business owners closed their doors, but most state enterprises have continued to operate as usual.

Pavel Latushko, a former culture minister and ambassador to France who joined the opposition and was forced to leave the country, announced the creation of a new opposition structure to help a transition of power. He said it will work together with Tsikhanouskaya and the opposition’s Coordination Council.

Amid the pressure from protesters, Lukashenko has manoeuvred to buy time by promising a constitutional overhaul that could trim his powers. The opposition has rejected his plan as a ruse to stifle protests.

Lukashenko spoke by telephone on Saturday with U.S. Secretary of State Mike Pompeo, and Belarusian authorities afterward allowed Vitali Shkliarov, a Belarus-born U.S. citizen who had spent nearly three months in jail, to leave the country.

Pompeo tweeted Wednesday that Shkliarovis “once again with his family andsafely in the United States.”

Shklyarov, a political consultant who also holds Russian and Belarusian passports, was arrested in late July while visiting his family in Belarus. Belarus' State Security Committee, which still goes by the Soviet-era name KGB, accused him of conspiring to stage mass riots. He denied the accusation. 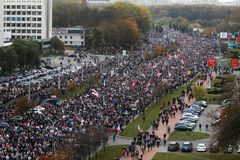 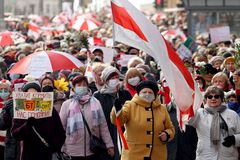 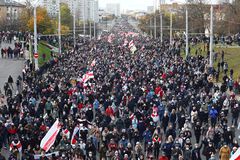