Poland’s top political leaders on Sunday attended the beatification of two revered figures of the Catholic Church – a cardinal who led the Polish church’s resistance to communism and a blind nun who devoted her life to helping others who couldn’t see.

The beatification of Cardinal Stefan Wyszynski and Mother Elzbieta Roza Czacka takes place at a time of declining church attendance and as some Poles have left the church over sex abuse scandals and the church’s coziness with the current right-wing government.

In a time of growing secularization and societal divisions, the celebration was a reminder of the moral authority and the unifying power the church once held over Poland.

The Mass was led by Cardinal Marcello Semeraro, the head of the Vatican’s Congregation for the Causes of Saints.

Wyszynski was Poland’s primate, or top church leader, from 1948 until his death in 1981. He was under house arrest in the 1950s for his refusal to bend to the communist regime, and was considered by some to be the true leader of the nation. His long resistance to communism is credited as a factor that led to the election of a Polish pope, John Paul II, and ultimately the toppling of Poland’s communist system in 1989.

Czacka, born in 1876 to an aristocratic family, went blind as a young woman and devoted the rest of her life to helping others. The Franciscan nun helped develop a Polish version of Braille and opened a centre for the blind near Warsaw.

Pope Francis paid tribute to them both during a visit to Budapest on Sunday, recalling how Wyszynski was arrested and imprisoned and how Czacka devoted her whole life to helping the blind.

“May the example of these new Blesseds encourage us to transform darkness into light with the power of love,” he said.

Wyszynski led the church through nearly three turbulent decades of often bitter conflict with the communist authorities, followed later by a form of partnership with the secular regime. Late in his life, Wyszynski had become accepted by the authorities as an important force in national life, and members of the regime attended his funeral.

During the difficult years of the 1950s, when Poland’s avowedly atheistic government sought to silence the church, the tall, slender Wyszynski thundered from his pulpit that “Christ has the right to be announced, and we have the right to announce him.”

Warsaw Archbishop Kazimierz Nycz recalled Wyszynski as a man who saved the Polish church under communism.

Wyszynski is often called the Primate of the Millennium in recognition of his achievement of holding a celebration of Poland’s millennium of Christianity in 1966.

Sunday’s ceremony comes after the Holy See has punished around 10 Polish bishops and archbishops over reported cover-ups of sexual abuse of minors by priests under their authority.

The revelations of clerical abuse and coverups have been pushing some Poles away from the church and leading some to take their children out of religion classes in schools.

Some Poles are also angry about the church’s closeness with the right-wing authorities and the country’s new restriction on abortion. The ruling, which went into effect earlier this year, denies women the right to abort fetuses with congenital defects. 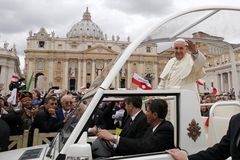 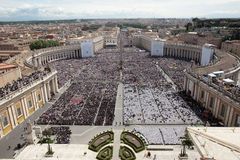