Poland’s electoral commission said on Thursday a presidential election could not be held on Sunday, while the lower house of parliament gave the green light for the vote to be held by post at a later date following a dispute over voting during the coronavirus pandemic.

The election was scheduled for Sunday but the opposition said the ruling nationalist party, Law and Justice (PiS), would be putting political gain ahead of public health if it went ahead. Opinion polls had put incumbent president Andrzej Duda, a PiS ally, on course for a landslide victory.

Late on Thursday, the National Electoral Commission said the vote could not take place as planned.

“The National Electoral Commission informs voters, electoral committees, candidates and electoral and local administrations that the vote on May 10, 2020 will not be able to take place,” it said in a statement.

PiS and its junior coalition partner, Accord, reached a deal on Wednesday on postponing the ballot in anticipation that the Supreme Court will declare the election invalid because of the inability to vote physically under coronavirus restrictions.

But although the Sejm, or lower house, approved legislation allowing the election to be decided only by postal ballot, the timing of the vote remains unclear.

Duda said he hoped the election would be held as soon as possible. Deputy Prime Minister Jacek Sasin told private radio RMF FM the earliest possible date would be June.

“Yesterday we worked out a solution which is good for Poland, which guarantees safe, fully democratic and transparent elections,” Accord party leader Jaroslaw Gowin told reporters on Thursday before the parliamentary vote.

While opinion polls show many Poles opposed holding an election during the pandemic, government critics said it was unclear what legal basis PiS had to cancel Sunday’s vote.

“Formally, the election has not been postponed,” said Borys Budka, head of the centrist Civic Platform opposition party, while acknowledging an election could not now be held on Sunday.

He said the legislation on a postal vote still did not guarantee a free and fair election.

Opposition critics and international monitors say only Duda has been able to campaign properly, with rivals constrained by travel and other restrictions imposed to curb the spread of the coronavirus.

Duda has backed reforms of the judiciary which the European Union’s executive, the European Commission, has said violated democratic norms. Having an ally as president is crucial for the government to be able to implement its conservative agenda as the president has the power to veto laws.

PiS had also wanted the election to go ahead now because of concerns that the recession likely to follow the coronavirus pandemic will dent support for the government and Duda.

Anna Materska-Sosnowska, a political scientist at Warsaw University, told private broadcaster TVN24 that PiS “had to step back for the first time in five years.”

But there was relief among voters. “I wouldn’t have had a chance to vote,” said Joanna Jasina, a 27-year-old waitress in Warsaw who was worried about the health risks and organisational problems.

Civil rights ombudsman Adam Bodnar welcomed the moves away from holding the election on Sunday. But he told Reuters such moves reflected a deterioration of the rule of law under Pis, saying: “The disease predates what we are experiencing now.” 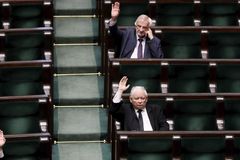