The Vatican on Tuesday said it would abolish the high level of secrecy it has applied to sexual-abuse accusations against clerics, ending a policy that critics said had often shielded priests from criminal punishment by secular authorities.

Removing that cloak of confidentiality, the Roman Catholic Church is changing its position to make it acceptable – but not required – to turn information about abuse claims over to police, prosecutors and judges.

In recent years, church officials in the United States and some other countries have shared with civil authorities information about some sexual-abuse allegations. But that co-operation, in theory, defied a decree adopted in 2001 that made the information a “pontifical secret” – the church’s most classified knowledge.

Victims and their advocates said the restrictions hampered civil authorities and helped conceal crimes, and they greeted Francis’s new instructions as a step forward.

Anne Barrett Doyle, co-director of BishopAccountability.org, a group that tracks abuse in the church, said the pope had taken “an overdue and desperately needed step.”

“For decades, pontifical secrecy has been an obstruction to civil justice, spurring bishops worldwide to thwart prosecutions of abusive priests,” Ms. Barrett Doyle said in a statement. She called changing the policy “a first step toward decreasing the anti-victim bias of canon law.”

The secrecy change is the latest step in the church’s attempts to tackle the sexual abuse crisis that has dogged it for decades. Growing global pressure for greater accountability forced the issue to the front of Pope Francis’s agenda.

In response to the demands for change, Francis convened a summit of church leaders in February to address the crisis. It ended with a call “for an all-out battle against the abuse of minors” and insistence that the church needed to protect children “from ravenous wolves.”

The rule announced Tuesday was also a product of the February meeting, the Vatican said.

“This is a sign of openness, transparency and the willingness to collaborate with the civil authorities,” Andrea Tornielli, editorial director of the Vatican’s communications office, wrote in a commentary.

Under the new norms, “any reporting, testimony and documents” related to sexual abuse “can now be handed over when requested to lawful authorities in their respective countries,” Ms. Tornielli wrote.

The Rev. Hans Zollner, a member of the Vatican’s child protection commission, said, “This is pretty much revolutionary.”

“The impact of this change will be determined by how broadly it is applied,” she said.

It was not clear, for example, whether the new policy would be applied retroactively, she said.

Ms. Barrett Doyle and other victim advocates, while praising the change, said it did not address many of the other issues they have raised, such as the fact that the church has not adopted a policy of defrocking any priest who has abused a child.

The Vatican had previously argued that the imposition of pontifical secrecy was necessary to protect both victim and accused. Church officials also said they could not insist that abuse allegations be reported to the civil authorities because in many parts of the world, that would put priests’ lives in danger.

But critics said the rules deterred victims from coming forward and helped cover up sexual abuse.

Father Zollner said that confidentiality was never supposed to be a “hiding place for the church, but unfortunately it was used” that way “many times.”

The new guidelines, which go into effect Jan. 1, specify that “confidentiality shall not prevent the fulfilment of the obligations laid down in all places by civil laws, including any reporting obligations, and the execution of enforceable requests of civil judicial authorities.”

The changes do not affect the secrecy of confession.

The instructions also made clear that even if documents and testimony produced in canonical trials are shared with civil law-enforcement officials or other interested parties, they may not be made public.

“The right of the victims and the witnesses to confidentiality must always be protected,” Ms. Tornielli wrote. “Now, however, the documentation must be placed at the disposal of the civil authority for the purpose of investigating cases for which canonical proceedings have already begun.”

On Tuesday, the Pope accepted the resignation of Archbishop Luigi Ventura, the Vatican ambassador to France, who has been under investigation in France for sexual assault. In July, the Vatican revoked his diplomatic immunity. 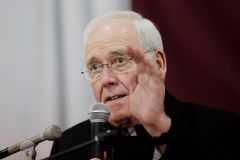