Pope Francis told refugees Monday in Bulgaria’s showcase refugee centre that they are bearing the “cross of humanity,” as he pressed his call for the migrant-skeptic Balkan country to welcome poor and desperate foreigners with love.

Children from Iraq, Syria and elsewhere sang for Francis and gave him drawings during his visit to the Vrazhdebna refugee centre, located in a school refurbished with EU funds on the outskirts of the Bulgarian capital, Sofia.

Francis thanked the children for their joy and hope, and told them that he knows well the pain of leaving behind one’s country. He compared their suffering to the cross Christ bore.

“Today, the world of migrants and refugees is a kind of cross, the cross of humanity,” Francis said. “It’s a cross that many people suffer.”

Bulgaria’s centre-right government has been criticized by human rights groups and the European Council for its treatment of asylum-seekers, particularly unaccompanied minors. The government, which includes three nationalist, anti-migrant parties, has called for the EU to close its borders to migrants and has sealed off its own border with Turkey with a barbed-wire fence.

“He (the Pope) is a great man,” said Taha Saber Ismael, an Iraqi Kurd who was among about 50 refugees who greeted the pope. “I hope he helps us.”

Francis is on the second-day of a three-day visit to the Balkans. Upon his arrival Sunday, he urged Bulgarians to not be indifferent to the plight of migrants and refugees, saying many are fleeing war, conflict and abject poverty in search of a better life. He noted that Bulgaria itself was losing thousands of its own citizens who were seeking better opportunities elsewhere in the European Union. Bulgaria is the poorest of the EU’s 28 nations, saddled by widespread corruption.

“Seeing with the eyes of faith is a summons not to spend your life pinning labels, classifying those who are worthy of love and those who are not,” he said. Rather, he urged Bulgaria’s Catholics to “create conditions in which every person can feel loved, especially those who feel forgotten by God because they are forgotten by their brothers and sisters.”

The Argentine pope has made the plight of migrants and refugees a hallmark of his papacy, urging governments to build bridges, not walls, and to do what they can to welcome and integrate refugees. His visit falls just three weeks before the European Parliament elections across the EU in which nationalist, anti-migrant parties are expected to make a solid showing.

Francis travelled Monday to the Catholic stronghold of Rakovsky for a First Communion Mass and meeting with the local community, who welcomed him warmly on a sun-drenched spring day.

Nearly 250 jittery children in white robes filled the pews of the Sacred Heart church, the girls wearing crowns of white roses, before receiving the sacrament for the first time.

In his homily, Francis told them that receiving their First Communion was a celebration of communion with the whole church, and he urged them to share that joy with others. Speaking simply, Francis engaged in a Q&A session with the kids, explaining to them the basics of the sacrament and living a Christian life in Italian that was then translated into Bulgarian.

Francis usually doesn’t administer Communion during Mass, but did so on Monday for the children. He has implied that he prefers to let others distribute the hosts because he doesn’t want people to use him for opportunistic reasons.

Citing local organizers, the Vatican said some 10,000 people were on hand outside the yellow and white church to greet Francis, who arrived into town in his open-sided popemobile.

“I haven’t slept all night from excitement,” said Nevenka Tanceva, a Catholic woman from Ravkovsky as she waited for Francis to arrive. “Pope Francis is a good father to us, he unites all Catholics and all people.”

Francis wraps up the day with a peace event back in Sofia. On Tuesday, he travels to neighbouring North Macedonia for the first-ever papal visit to the country. 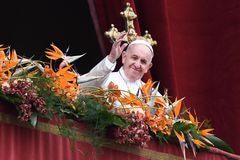 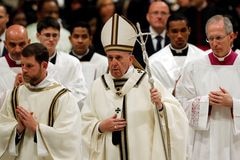