Three days after a tropical storm swept through the New York region and left more than one million people without power, much of Upper Manhattan was briefly plunged into darkness early Friday morning.

The blackout, which Mayor Bill de Blasio said was caused by a recent lightning strike, lasted for less than an hour. But it left tens of thousands of Con Edison customers without electricity, furthering worries about the integrity of the region’s power grid that were raised by the damage caused by Tropical Storm Isaias earlier this week.

The lack of power has exacerbated the distress brought by the coronavirus pandemic — particularly in the city’s suburbs, which were hit harder by the storm.

Many in the region who have been forced to remain at home are still without the phone or internet service necessary to work remotely, or air conditioning that can bring relief in a humid New York summer.

“I really wish Con Ed would get the memo that they have to be clearer in their game plan for New Yorkers,” Mr. de Blasio said at a news conference Friday. “People are depending on this power.”

As of Friday afternoon, more than one million customers in New York, New Jersey and Connecticut remained without electricity. Only about 52,000 of them were in New York City.

Connecticut was particularly hard hit. About 400,000 customers of the state’s main electric supplier, Eversource, still did not have power, and the company has said its repairs would likely not be complete until Tuesday.

Friday’s outage in Manhattan began around 5:15 a.m., affecting about 180,000 businesses and homes in the Upper West Side, Upper East Side and Harlem, according to Con Edison. Photos and videos posted on social media showed complete darkness stretching for blocks.

The utility said the blackout came after “a problem on our transmission system” that caused three power networks in Manhattan to “lose their electric supply.”

Service had mostly been restored by 6:45 a.m., although about 60 customers were still without power in the borough Friday afternoon.

In the Queens outage, more than 5,000 customers were without power in the mostly residential Middle Village neighbourhood. A Con Edison spokesman said that outage was still being investigated and that it had been mostly resolved.

But Richard Nadler, 88, was still without power as of Friday afternoon. His daughter, Evelyn Stidolph, said that Con Edison did not expect Mr. Nadler’s power to return until Saturday night.

Having a second outage within three days meant Mr. Nadler was again facing concerns over the loss of his refrigerator, where he stores insulin required for his diabetes, and the chairlift he needs to move between the floors of his home.

Still, Ms. Stidolph, who lives a mile away and did not lose power, said her father was fortunate compared with some of his neighbours.

“I feel bad for the block because there are so many elderly here, and they live alone,” she said. “They have home aides come in for a few hours, and that’s it.”

Even as the outage Friday morning was resolved, much of Queens remained without power — more than 28,000 customers, which accounts for more than half of the city’s outages.

Across the region, utility companies have said that some businesses and homes could be in the dark into next week, as part of what is emerging as the worst natural disaster to hit the area since Hurricane Sandy in 2012.

After the storm, Governor Andrew Cuomo of New York called for an investigation into the state’s utilities, accusing them of not adequately preparing.

The governor has often criticized utilities over power outages after storms or unexpected blackouts — including in July, 2019, when an equipment failure at a Con Edison substation caused an hours-long blackout on Manhattan’s West Side.

Con Edison estimated that it would not fully restore service disrupted by the storm until Sunday evening — a timeline that several city politicians, including Mr. de Blasio, called unacceptable.

A spokesman for Con Edison said that the utility did not believe the outages were connected to any lingering effects from the tropical storm.

Mr. de Blasio said that the outage in Manhattan appeared to be “weather-related” but did not provide more details. 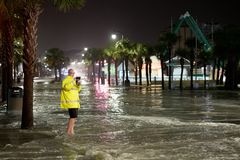