The leadership of the Proud Boys has come under increased scrutiny as agents and prosecutors across the country try to determine how closely members of the far-right nationalist group communicated during the riot at the Capitol this month and to what extent they might have planned the assault in advance, according to federal law enforcement officials.

At least six members of the organization have been charged in connection with the riot, including one of its top-ranking leaders, Joseph Biggs. Biggs, a U.S. Army veteran, led about 100 men on an angry march from the site of then-President Donald Trump’s speech toward – and then into – the Capitol building.

The Proud Boys, who have a history of scuffling with left-wing anti-fascist activists, have long been some of Trump’s most vocal, and violent, supporters, and he has returned the favour, telling them during one of the presidential debates to “stand back and stand by.” Along with the right-wing militia the Oath Keepers, the Proud Boys was one of the extremist groups with a large presence at the Capitol incursion, investigators said.

Despite having launched one of the most sprawling inquiries in U.S. history, investigators have yet to unearth clear-cut evidence suggesting there was a widespread conspiracy to assault the Capitol on Jan. 6.

Still, in recent days, they have turned their attention toward a pair of Proud Boy organizers on the West Coast and have started executing a series of search warrants connected to the group, a federal law enforcement official said, speaking on condition of anonymity because he was not authorized to discuss an ongoing inquiry.

One of the organizers, Ethan Nordean, of Auburn, Wash., appeared with Biggs in a YouTube video on the day of Trump’s rally and can be seen shouting orders to a group of Proud Boys through a bullhorn. Nordean – also known as Rufio Panman, investigators said – is named in Biggs’ criminal complaint but has not been charged himself.

The second Proud Boy organizer, Eddie Block, of Madera, Calif., took video of Biggs and Nordean during the event in Washington, according to a photograph included in Biggs’ charging documents. In an hour-long YouTube video that he livestreamed this weekend, Block acknowledged that about 25 federal agents swooped down on his house Friday, seizing two of his cellphones, a laptop, an iPad, an Xbox and an old computer.

When reached by phone Tuesday, Block declined to comment further on the federal investigation. Nordean could not be reached for comment.

The FBI has acknowledged it is conducting a similarly serious inquiry into the Oath Keepers, a group largely composed of law enforcement and military personnel, and the Three Percenters, which emerged from the extremist wing of the gun rights movement. Several members of both organizations have already been charged in connection with the Capitol attack, including three defendants who stand accused of the most severe conspiracy allegations levelled so far.

Investigators involved in the Capitol attack have also focused their attention on the chairman of the Proud Boys, Enrique Tarrio. Tarrio, who lives in Miami, was scheduled to attend the march in Washington but was thrown out of the city by a judge the day before it happened. When he was arrested Jan. 4 in connection with the burning of a Black Lives Matter banner that had been torn from a historic Black church during a different round of violent protests last month, police officers found he was carrying two high-capacity rifle magazines emblazoned with the Proud Boys’ chicken logo.

Prosecutors have noted in documents attached to Biggs’ case that Tarrio first began encouraging the Proud Boys to go to Washington for the “Stop the Steal” march in late December, when he posted a message on the social media app Parler announcing that members of the group would “turn out in record numbers.”

In the runup to the rally, Tarrio also used Parler to urge his members to avoid wearing their traditional black-and-yellow polo shirts but instead to go “incognito” and move about the city in “smaller teams,” prosecutors say.

In an interview with The New York Times one week after the siege, Tarrio, who took over the Proud Boys from founder Gavin McInnes, said that the attack on the Capitol was misguided and that anyone who broke windows or took part in the nearly 140 assaults on police officers should be prosecuted.

He tried to minimize the role that the Proud Boys played in the attack – even though, among the 150 people charged so far, prosecutors have brought charges against Nicholas Ochs, the leader of the group’s Hawaii chapter, and Nicholas DeCarlo, one of its top media figures. Dominic Pezzola, a Proud Boy from Rochester, New York, was in the first wave of rioters to breach the Capitol, prosecutors say, and stands accused of shattering a window with a plastic police riot shield.

“Obviously, they didn’t help our cause,” Tarrio said.

Investigators are continuing to sift through online posts and messages by Tarrio and Biggs in an effort to determine if they showed any attempt at co-ordination or planning, the federal law enforcement official said.

On the day of the attack, Tarrio took to Parler, calling members of the Proud Boys who took part in it “revolutionaries” and urging them not to leave.

While investigators are increasingly focused on people who may have preplanned the attack, any evidence that the assault was organized in advance could be a factor in Trump’s second impeachment trial, scheduled for next month.

House Democrats have accused the former president of inciting the riot, which led to the deaths of five people, including one Capitol Police officer. Several defendants have said they joined the siege following Trump’s orders, but if proof emerges that groups like the Proud Boys or Oath Keepers plotted it in the days before it happened, it could undermine some arguments that Trump is entirely to blame.

On the other hand, evidence could end up showing that any preplanned attack was inspired by weeks of the president’s baseless insistence that the election was rigged. 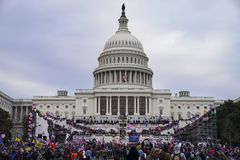