Pity poor Vladimir Putin. After almost two decades of working day and night as leader of Russia – sometimes as President, sometimes as Prime Minister – he has only a surprisingly modest bank account, an average-sized apartment in St. Petersburg and three old cars to show for it.

That’s the version of reality that Russian voters were presented with as they cast their ballots in last Sunday’s presidential election. Information about each of the eight candidates, including their declared financial assets, was posted on the walls of polling stations so that Russians could read up before casting their ballots.

If Russian voters thought there was anything odd about Mr. Putin’s financial claims, they were apparently unbothered. More than three-quarters cast their ballots for Mr. Putin, handing him another six-year term in the Kremlin.

Mr. Putin’s financial declaration is wildly at odds with his status as the long-ruling leader of a regime frequently ranked as one of the most corrupt on the planet. Critics say Mr. Putin is a billionaire many times over – some believe he may be the richest person in the world.

Russia’s opposition says Mr. Putin directly or indirectly owns substantive shares of some of Russia’s biggest companies, and is the de facto owner of a collection of luxurious properties around the country, including a palace on the Black Sea coast. Mr. Putin has also been said to have dozens of private planes, helicopters and yachts at his disposal.

Stanislav Belkovsky, a Russian political analyst who once worked for the Kremlin but now advises the opposition, has estimated Mr. Putin’s personal fortune at US$70-billion. Financier Bill Browder – one of the biggest investors in Russia until he became a harsh Kremlin critic – told the U.S. Congress last year that he believed Mr. Putin was worth US$200-billion.

Kremlin spokesman Dmitry Peskov has said that claims about Mr. Putin’s wealth were a “perverted commenting of reality.” Mr. Peskov said that while Mr. Putin, as Russia’s president, had access to various vehicles and residences, they were not his personal property.

“All these rumours, all these accusations about billions and billions of dollars of his fortune, this is not true. Don’t believe in them. He’s got nothing,” Mr. Peskov told CNN last year. “He’s got what he writes in his personal financial declaration every year.”

According to that declaration, Mr. Putin owns only a 77-square-metre apartment, and a garage, in St. Petersburg. His motoring choices are decidedly Soviet chic: two 1960s Volga sedans and a 2009 Lada Niva, a boxy jeep you could see driving in any provincial Russian town.

He claimed to have 13.8-million rubles (about US$242,000) scattered around 13 bank accounts, and his only stock market play is 230 shares he owns in the Bank of St. Petersburg, which were worth 58 rubles, or just over US$1, a share this week. When he’s in Moscow, he stays in a 153.7-square-metre apartment leased to him by the government.

In other words, Mr. Putin – the self-described street kid from St. Petersburg – claims to live better than the average Russian, but not outrageously so.

While claims about Mr. Putin being a billionaire have never been proven, it is clear that members of his inner circle have gotten extremely rich during Mr. Putin’s 18-year reign over Russia.

On Thursday, anti-corruption activists took London-based journalists on a “kleptocracy tour” of some of the multimillion-dollar British properties they claim are owned by oligarchs and government officials close to Mr. Putin.

The 2½-hour tour stopped at some of London’s poshest addresses, including Kensington Palace Gardens, near the official residence of Prince William and the Duchess of Cambridge; Belgrave Square, in the heart of London’s embassy district; and Whitehall Gardens, a building directly adjacent to the British Ministry of Defence headquarters.

The US$125-million home on Kensington Palace Gardens belongs to energy tycoon Roman Abramovich, while the US$70-million home on Belgrave Square belongs to aluminum magnate Oleg Deripaska. Both oligarchs are reported to be close to Mr. Putin.

Meanwhile, two apartments on Whitehall Gardens, worth a combined US$16-million, are said to belong to Russia’s deputy prime minister, Igor Shuvalov, who has an official income of US$160,000.

Roman Borisovich, the founder of ClampK, the anti-corruption organization that runs the London tours, said that while most Russians were aware of how much wealth had left their country, they didn’t blame Mr. Putin for it. “The czar is always innocent, the boyars [the aristocrats] are always the guilty party. [Mr. Putin’s] entourage, his close circle, his officials – in the perception of Russian people, they are corrupt. But he is not [seen as corrupt] and he is trying to control the corruption.”

But Mr. Borisovich said he didn’t believe Mr. Putin’s claim to have lived by the rules while everyone around him got wildly rich. “Clearly he has a stake in the businesses of his inner circle. They have gotten immensely rich from government contracts, from all sorts of special carve-outs approved and issued by the government. Under him, a whole generation of oligarchs came up.”

There have been growing calls for Britain to freeze the British assets of oligarchs linked to Mr. Putin in the wake of a nerve-agent attack in the English town of Salisbury earlier this month.

Prime Minister Theresa May’s government says it believes the Kremlin was behind the attack, which left former Russian spy Sergei Skripal and his daughter Yulia in critical condition. Analysis
West shrugs at Putin win, but the scale of his victory matters
March 19, 2018 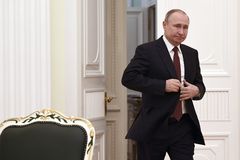