The TikTok video showed a bizarre mash-up of a train carrying military hardware on a dim morning somewhere in Russia, to the added strains of Vivaldi. Kirill Mikhailov stared at it with the transfixed eyes of a cat watching its prey.

“There!” he said, pausing the clip and flashing a triumphant smile. “We got lucky.”

Mr. Mikhailov zoomed in on a serial number on the side of one of the rail cars: 43354336. With this, he searched an online directory of Russian rail cars. The train, he quickly demonstrated, originated in Russia’s northern Caucasus region, the base of the 34th Motorized Rifle Brigade, which possesses the same MT-LB infantry fighting vehicles being carried on the train in the video. (The TikTok clip appears to have been filmed by a motorist stuck at a railway crossing, waiting for the military train of flat-bed rail cars to pass.)

Why are tensions building at the Russia-Ukraine border?

The train’s destination, according to the online directory, is Kerch, a city in the Crimean Peninsula that Russia seized and annexed from Ukraine seven years ago – and some 800 kilometres west of where the brigade is usually based. The annexation of Crimea was the first phase of Russia’s continuing and undeclared war on Ukraine, which threatens to erupt into larger conflict in the weeks ahead.

The train Mr. Mikhailov geolocated is just one small part of a massive Russian military buildup in Crimea and along the country’s long frontiers with Ukraine. According to various estimates, there are now somewhere between 95,000 and 115,000 troops stationed within a short drive of Ukraine’s borders, backed by some 1,200 tanks, 330 military aircraft, and more than 80 warships and submarines.

Those numbers are imprecise, but the fact that the public knows as much as it does about the buildup owes a lot to the work of a small community of open-source researchers such as Mr. Mikhailov, who works for the Moscow-based Conflict Intelligence Team. The group, better known as CITeam, says it aims to stop the harmful actions of Russian authorities that lead to the escalation of military conflicts. 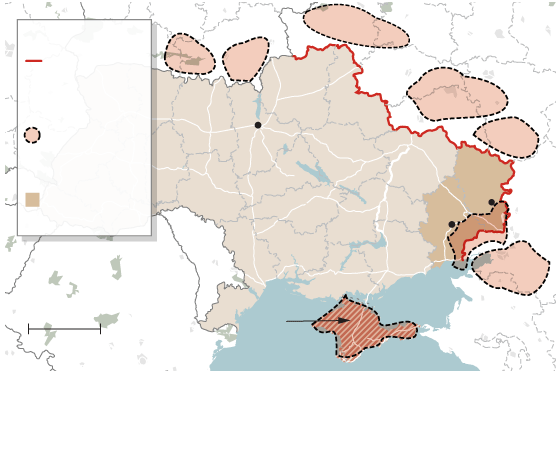 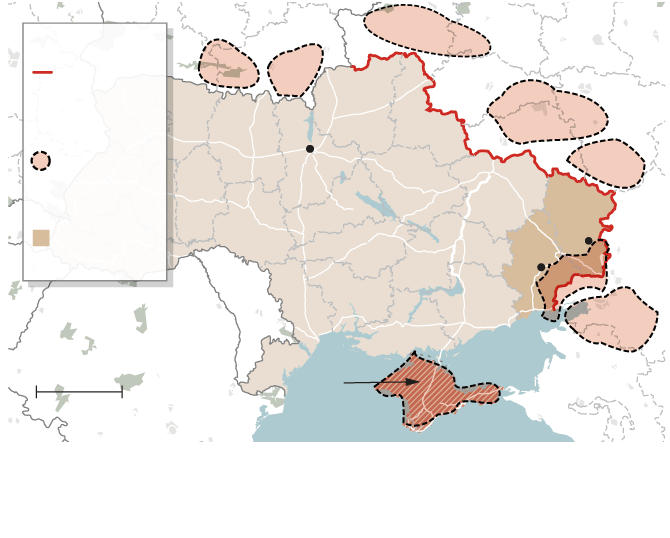 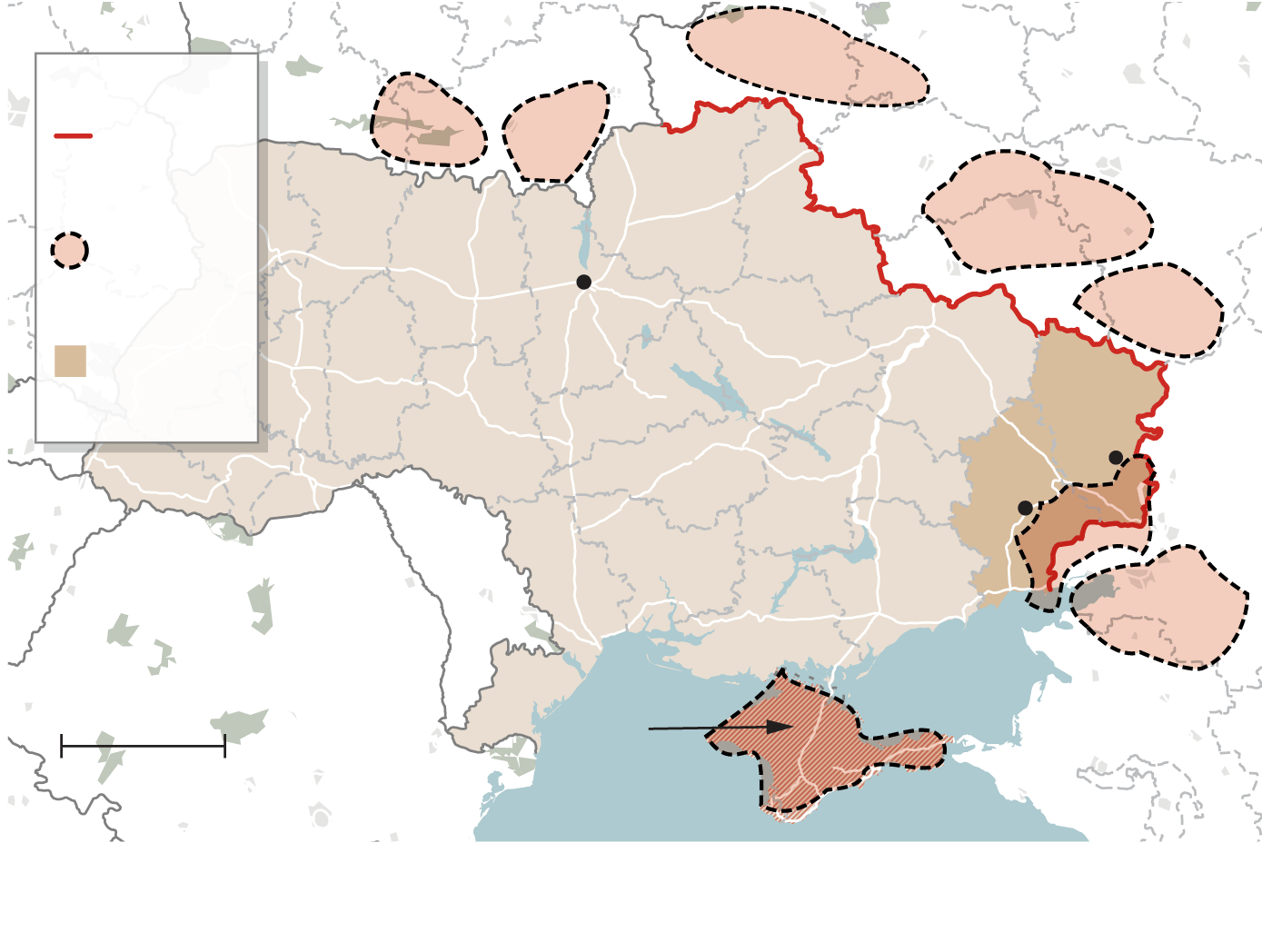 “Our motto is to prevent future conflict with big data,” said Rodion Rozhkovsky, one of the founders of Liveuamap, a separate Ukraine-based website that collects information from open-source researchers, mainstream media and government statements. The Liveuamap team plots it all on an interactive map that allows users to see for themselves how a situation is evolving that day.

The bad news is that both CITeam and Liveuamap see plenty of evidence that Russian President Vladimir Putin is amassing a military force of a size that’s difficult to describe as anything other than an invasion army. “It’s not just about this year, it’s about the last three years. They’ve been gathering troops near to Ukraine, and in occupied Crimea and Donetsk,” Mr. Rozhkovsky said. “It’s only Putin’s intentions that we can’t know from open sources – because he doesn’t have an Instagram or Twitter account.”

Groups such as CITeam and Liveuamap have stepped into the grey area between the outright surveillance that intelligence agencies do and reports that mainstream media publish.

The open-source researchers say they don’t know each other and know even less about the ordinary Russians and Ukrainians who provide the primary information by uploading videos of trains and convoys moving through their towns and villages – presumably filmed out of sheer curiosity – to TikTok and Instagram, as well as Russia’s VKontakte social network.

Researchers such as the 32-year-old Mr. Mikhailov, who moved from Russia to Ukraine to escape what he describes as the toxic nationalism that surged in Russia following the Crimea annexation, help make sense of the raw material by verifying where and when the videos were taken. He spends much of his day scrolling through social-media hashtags such as “army” and “tanks,” looking for clues about the scale and intent of Russia’s military movements.

“TikTok is not a serious place. There’s a lot of disinformation, misinformation and very stupid memes,” Mr. Mikhailov said in an interview at the Kyiv apartment where he now lives and works. “But you do occasionally find a pearl in the heap of dung.”

Like many of the open-source specialists who study the Russian military, what began as a hobby got serious after Russia’s annexation of Crimea in 2014. A translator by training, Mr. Mikhailov began as a self-taught military buff who first became interested in weaponry while playing a Second World War computer strategy game. He became a respected open-source researcher after studying the work of BellingCat, an open-source team (which receives some funding from Western governments) that became famous by revealing evidence of the Russian military’s role in shooting down a Malaysia Airlines passenger plane over eastern Ukraine in 2015.

Mr. Mikhailov now draws a salary from CITeam, which raises donations online. The group rose to prominence in the open-source community after it helped prove the presence of Russian special forces troops in the Donbas region of Ukraine – where the Kremlin has always denied a role in what it calls the “separatist” war being fought there – and later by tracing the deployment of specific Russian units to Syria.

Mr. Mikhailov’s motivations are personal. “I want the [Putin] regime gone. I want to go home,” he says. And shining a light on what Mr. Putin’s army is up to is Mr. Mikhailov’s contribution to the cause of trying to change Russia. “We have to be open about military casualties – like who died where, and for what.”

Mr. Rozhkovsky’s story has a similar arc. He and his partners were software designers living in the eastern Ukrainian city of Dnipro when protests erupted around the country in 2014 against the Moscow-backed government of Viktor Yanukovych. As the protests evolved into a revolution – and then Mr. Putin retaliated by ordering troops into Crimea and Donbas – Mr. Rozhkovsky became frustrated with the coverage in traditional media. The tipping point, he says, was a CNN report that featured a map identifying Ukraine as a Pakistan-shaped country wedged between India and Afghanistan.

The incident convinced the 36-year-old Mr. Rozhkovsky and his co-founders that news about a conflict was best delivered right on a map, so that no one could be confused about what was happening where. The style became so popular that Liveuamap (the “ua” stands for “universal awareness”) now sells ads on what has grown into a series of websites mapping dozens of conflicts around the world. It also has developed an app that allows users to flick between hot zones.

While Liveuamap doesn’t try to geolocate videos the way CITeam and others do, Mr. Rozhkovsky says his staff of 10 has developed its own expertise: identifying which accounts to trust and which to ignore. But he admires the open-source specialists. “It’s amazing how they do stuff, how they can geolocate something from two trees [that appear in the background of a video]. Those two trees could be anywhere in the world, but they locate them to just a couple of metres,” he said.

Nor does Liveuamap try to find out who the original sources of the information are for fear of putting them in danger. Mr. Rozhkovsky says he worries his team, too, could become targets if Russia escalates its war against Ukraine. “We will have to move [from Dnipro] to protect our lives.”

Mr. Mikhailov said he also worries about his own security, especially after seeing how Kremlin critics living in Britain, Germany and elsewhere have been targeted in recent years. “People have been murdered for less,” he said.

But he doesn’t stop his work: As he speaks, his eyes remained glued to his screen on another video, which suggests a column of Russian tanks recently left its base in the western city of Voronezh and moved to a new position 100 kilometres closer to the Ukrainian border.