Turning a momentous page in its history, Spain on Thursday exhumed the remains of dictator Gen. Francisco Franco from his grandiose mausoleum outside Madrid and reburied them in a small family crypt north of the capital.

The daylong operation featured Franco’s coffin being flown by helicopter to its new resting place, and the event was broadcast live on television and watched closely across the country. Large parts of the ceremony were carried out behind closed doors and in private, however.

Spain’s Socialist government was behind the decision to move the 20th-century autocrat’s remains, saying it wanted to settle a long-standing debt to its victims.

Many in Spain considered the vainglorious Valley of the Fallen mausoleum, which Franco had built for his tomb, to be an insult to the hundreds of thousands of people who died in Spain’s 1936-39 Civil War, which Franco’s forces won, and to those who suffered persecution under his subsequent near-four-decade regime.

The gargantuan shrine exalting a dictator was also considered a smear on Spain’s standing as a modern democratic state.

Many of Franco’s victims are buried in unmarked graves in the same mausoleum, which was carved out of a mountainside using convicts as part of the work force, including political prisoners under Franco.

In a rigorously-planned operation, the coffin was extracted from under marble slabs and two tons of granite at the mausoleum in a ceremony attended only by 22 Franco family members, government officials and workers.

A brief prayer was said in accordance with a request from Franco’s family before the coffin was carried out of the mausoleum by some of his grandchildren. It was then taken by an army helicopter to the Mingorrubio cemetery, 31 kilometres (20 miles) away, where Franco’s wife is buried.

Several hundred people, many waving Franco-era flags and symbols and chanting “Viva Franco,” gathered near the cemetery while police guarded the area. At one point, several of them extended their arms in fascist salutes and sang “Cara al Sol” (Facing the Sun), the Spanish fascist anthem.

The private reburial service was over by mid-afternoon and only a handful of people remained outside the cemetery praying.

Speaking from government headquarters later, Spain’s interim Socialist prime minister, Pedro Sanchez, said the exhumation “puts an end to a moral affront that is the exaltation of a dictator in a public place.”

He said it was necessary now to begin the process of identifying the thousands of Franco’s victims who were also buried at the mausoleum.

“It’s an infamy that has to be repaired,” he said.

Outside the new burial ground, Macarena Martinez Bordiu, a distant relative of the dictator, said she felt “outraged” with what was happening and accused the government of “desecrating a tomb.”

In a statement, Franco’s grandchildren said, “the government, aided by other powers of the state and the Church’s hierarchy, has completed the profanation of the sepulcher of our grandfather Francisco Franco, gravely violating our basic rights.”

“What the government presents as a ‘victory of democracy’ is no more than a shameless media circus only seeking propaganda and electoral gains,” they added.

The exhumation and reburial will not put an end to Franco’s legacy on Spain’s political scene, since it comes just weeks ahead of the country’s Nov. 10 general election.

Recent polls indicate a boost of support for a far-right party which is calling to scrap the 2007 Historical Memory Law that aimed to seek redress for the estimated 100,000 victims of the civil war and the Franco era who are buried in unmarked graves.

Franco ruled Spain between 1939 until his death in 1975, after he and other officers led a military insurrection against the Spanish democratic government in 1936 – a move that started a three-year civil war.

A staunch Catholic, he viewed the war and ensuing dictatorship as something of a religious crusade against anarchist, leftist and secular tendencies in Spain. His authoritarian rule, along with a profoundly conservative Catholic Church, ensured that Spain remained virtually isolated from political, industrial and cultural developments in Europe for nearly four decades.

The country returned to democracy three years after his death but his legacy and his place in Spanish political history still sparks rancour and passion.

For many years, thousands of people commemorated the anniversary of his Nov. 20, 1975, death at the Valley of the Fallen and in Madrid’s central Plaza de Oriente square. Although the dictator’s popularity has waned immensely, the exhumation was criticized by Spain’s three main right-wing parties and some members of the Catholic Church for opening old political wounds.

The exhumation was finally authorized by the Supreme Court in September when it dismissed a months-long legal bid by Franco’s family to stop it.

The plan stemmed from amendments of the Historical Memory Law, which prohibited having Franco’s remains in a public place that exalted him as a political figure.

Daniel Galan, who is trying to find out if a body recently recovered from a mass grave could be those of his grandfather – a left-wing mayor who vanished at the hands of Franco’s forces – called the remains’ relocation “an important step.”

But he also urged the government to identify and return to their relatives the bodies of the dictatorship’s victims across the country and at “The Valley,” where Galan said that the site’s 152-meter-tall (500-feet) cross should be toppled.

“They are saying that the exhumation fixes a flaw of our democracy,” he said. “But there is still much to do.” 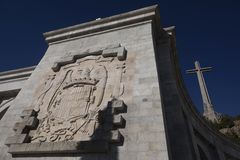