North Korea handed over 55 boxes carrying remains thought to be of U.S. soldiers killed in the 1950-53 Korean War on Friday, officials said, a first step in implementing an agreement reached in a landmark summit in June.

The handover of the boxes, draped in the blue and white flag of the United Nations, represents a modest diplomatic triumph for U.S. President Donald Trump from his June 12 summit with North Korean leader Kim Jong Un in Singapore that was aimed primarily at persuading North Korea to give up a nuclear weapons program that threatens the United States.

“At this moment a plane is carrying the remains of some great fallen heroes from America back from the Korean War,” Trump said at an event at the White House.

The transfer of the remains coincided with the 65th anniversary of the 1953 armistice that ended fighting between North Korean and Chinese forces and South Korean and U.S.-led forces under the U.N. Command. The two sides remain technically at war because a peace treaty was never signed.

More than 7,700 U.S. troops who fought in the Korean War remain unaccounted for, with about 5,300 of those lost in what is now North Korea.

The pledge to transfer war remains was seen as a goodwill gesture by Kim at the summit. While it has taken longer than some U.S. officials had hoped, the handover will rekindle hopes for progress in nuclear talks, which so far has appeared scant.

Kim committed in a broad summit statement to work toward denuclearization but Pyongyang has offered no details, raising doubts about whether he is willing to give up his weapons unilaterally, as Washington has demanded.

In a statement on the remains handover, the White House said it was “encouraged by North Korea’s actions and the momentum for positive change,” while South Korea called it “meaningful progress that could contribute to fostering trust” between Pyongyang and Washington.

A U.S. military transport plane flew to an airfield in North Korea’s northeastern city of Wonsan to bring the remains to Osan air base in South Korea.

At Osan, soldiers in dress uniforms with white gloves slowly carried the 55 cases to vans waiting on the tarmac.

The U.N. Command said the remains would be flown to Hawaii for further processing under the U.S. Defense POW/MIA Accounting Agency.

U.S. Secretary of State Mike Pompeo said on July 15 that Washington and Pyongyang had agreed to recommence field operations in North Korea to search for the thousands of Americans who never returned home from North Korea.

The United States and North Korea conducted such joint searches from 1996 until 2005, when Washington halted the operations, citing concerns about the safety of its personnel as Pyongyang stepped up its nuclear program.

More than 400 caskets of remains found in North Korea were returned to the United States between the 1990s and 2005, with the bodies of some 330 other Americans also accounted for, according to the Defense POW/MIA Accounting Agency.

The program helped bring in vital hard currency to North Korea, which has been under U.S.-led sanctions for decades. However, reviving it could complicate U.S. efforts to persuade countries around the world to maintain economic pressure on Pyongyang.

Pyongyang has renewed calls for a declaration of the end of the Korean War, calling it the “first process for peace” and an important way Washington can add heft to security guarantees it has pledged in return for North Korea giving up its nuclear weapons.

The U.S. State Department says Washington is committed to building a peace mechanism to replace the armistice when North Korea has denuclearized.

Pompeo told a Senate hearing on Wednesday North Korea was continuing to produce fuel for nuclear bombs despite its pledge to denuclearize, even as he argued that the United States was making progress in talks with Pyongyang.

Pompeo said North Korea had begun to dismantle a missile test site, something Kim also promised in Singapore, and called it “a good thing, steps forward.”

However, he said North Korea needed to follow through on his summit commitments to denuclearize and stressed the need to maintain sanctions until it did so. 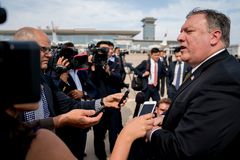 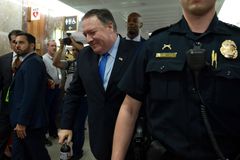 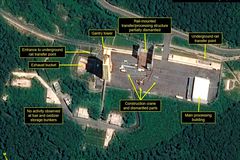