The questions started around midnight, after a sumptuous spread of seafood and numerous cans of beer. Kuan-ju Chen, then a university student, was being considered as a guest for a 2018 youth symposium in Xiamen, the Chinese city on the mainland doorstep to his home in Taiwan.

But first, he needed to pass a middle-of-the-night screening. For more than an hour, the people who had plied him with drinks asked about his family background, his career ambitions and his political views. They wanted to know, “Do you want to get involved in politics? Which side do you want to choose?” he recalls. “The people that were being invited to attend the symposium were only those that were not against the Communist Party.”

For those in China looking to groom new allies in Taiwan, particularly ahead of the presidential election that will take place Saturday, Mr. Chen was a good choice. He passed the screening and attended the symposium. Later that year, he joined local voters in an upset vote to install Han Kuo-yu, a member of the China-friendly Nationalist Party, or Kuomintang, as the mayor of the city of Kaohsiung. It was part of a wave of local electoral victories for the Kuomintang – which took 13 of 20 jurisdictions – that suggested a new openness in Taiwan to pushing for better relations with China. Mr. Han used the mayor’s office as a springboard to a presidential run and campaigned on setting aside differences with Beijing. He famously described Taiwanese independence as scarier than syphilis and, in a controversial step, met directly with Chinese officials in Hong Kong.

But he won’t get another vote from Mr. Chen, who is now 23, and doesn’t intend to mark his ballot again for Mr. Han – a change reflected more broadly in Taiwan, where renewed fears about China have elbowed out other issues in the campaign for presidential and legislative elections. It’s a shift that has dramatically reversed the re-election fortunes of Tsai Ing-wen, the China-skeptic President ostracized by Beijing, which claims the region as its own. In little more than a year, Ms. Tsai’s approval ratings have rocketed from barely 20 per cent – a nadir of such deep anger over her leadership that she was forced to step down as party chairwoman – to well over 50 per cent, a rebound that, this weekend, stands to return to power a leader who has cast herself as a defender of democracy against Chinese dictatorship.

It also makes Taiwan perhaps the most vivid example of an electorate grappling with the rising influence of the world’s second-largest economic power, whose more demanding and assertive foreign policy has provoked concern across Western capitals, Ottawa included.

In Taiwan, new worry began to emerge a year ago, when Chinese President Xi Jinping described “one country two systems” as a model for Taiwan reunification, a proposal roundly rejected by a region that operates as an independent country in every practical sense. In the months that followed, the outbreak of violent protests in Hong Kong provided a bloody glimpse of the strains in a city already under the “one country two systems” model. “When people go to Hong Kong, they could see with their eyes, hear with their ears, smell with their noses – the tear gas,” said Kuan-ting Chen, deputy spokesman for the Taipei City Government. ”That’s why people are talking less about policy and it’s all about China.”

Midway through 2019, Academia Sinica, Taiwan’s leading academic institution, released public opinion research that showed 60 per cent of people saw national security as most important in relations with China, compared with just 31 per cent most interested in economic benefits, a major change from previous years. “The poll reflects the anxiety of Taiwanese, the anxiety of being annexed by China,” said Jay Chen, deputy director of Academia Sinica’s Institute of Sociology.

Mr. Han has rejected the one country two systems formulation for Taiwan. But Ms. Tsai’s Democratic Progressive Party, or DPP, has positioned itself as the best way to, as Ms. Tsai put it, “defend this fortress of democracy.”

“Young Hong Kongers have used their blood and tears to tell us that one country two systems is not trustworthy,” she said at a Friday campaign rally, in which giant screens showed images of street violence in Hong Kong.

Mr. Han’s supporters reject that idea. As many as two million Taiwanese live in China, 40 per cent of Taiwan’s exports go to China and surveys show about three-quarters of Taiwanese are keen to work in China, where wages can be comparatively high. “We cannot afford to have a bad relationship with them,” said Lee Hong-yuan, a former interior minister and supporter of Mr. Han. He accuses Ms. Tsai of picking fights with Beijing as an electoral strategy. “They try to create tension so that they can protect their power,” he said.

Meanwhile, those seeking to raise domestic matters during the election have found it tough going. Taipei mayor Ko Wen-je, chairman of the Taiwan People’s Party, has hoped to debate issues such as education. But “he doesn’t think that topics like these can be fully discussed because of what’s going on,” said Mr. Chen, the city government’s deputy spokesperson. “Hong Kong and China issues have taken precedence.”

Mr. Chen, the student wooed by China, is emblematic of the changed mood. Now the director of international affairs for the Taiwan Youth Association for Democracy, he helped organize a pair of anti-authoritarianism demonstrations last year that drew more than 100,000 people in support of Hong Kong.

Voting for Mr. Han “was a mistake,” he says, and he looks back on his trip to Xiamen dimly. The symposium amounted to an effort “to recruit as many Taiwanese students as possible to join United Front work groups,” he said, referring to Beijing’s efforts to spread influence. Beijing is staging “an invasion,” Mr. Chen said. “Secretly, invisibly, in a way you can’t really perceive if you don’t pay attention.”

He sees the election as a chance to push back.

“If you don’t care about the international issue at this point,” he said, in a reference to China, “then somehow we will lose the sovereignty of Taiwan.”

With reporting by Milo Hsieh 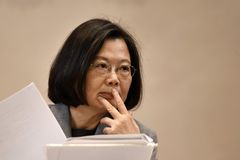 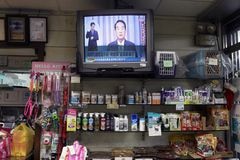 Opinion
The fate of Taiwan hangs in the balance
January 2, 2020 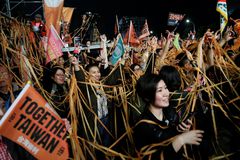