A report into the fire at London’s Grenfell housing complex has been hailed by survivors as a vindication of their criticism of the fire service and a boost to their call for criminal charges.

“We have been waiting a long time for this report,” said Grenfell United, an organization which represents survivors. The findings “give us some confidence that our journey towards truth has finally begun. We now need to urgently see responsibility and action from this report, not excuses.”

The 856-page report was made public on Wednesday and it presented a minute-by-minute account of the fire which started in the back of a refrigerator in a fourth-floor apartment just after midnight on June 14, 2017. By the time the fridge fire was contained, the flames had moved out the window and up the 24-storey tower in a matter of minutes, fuelled by the building’s flammable exterior cladding. The inferno killed 72 people – 71 that night plus another woman who died months later from her injuries – making it one of the worst disasters in Britain in decades.

The report marked the end of the first stage of a public inquiry and it portrayed a litany of shortcomings by firefighters who waited too long to evacuate the building, lacked proper training and became so overwhelmed with the fire that at one point a commander said he felt helpless. In one case a family of five died in its apartment after repeated calls to 911 weren’t heeded and the information about where the family was located got lost. The report also highlighted woefully outdated policies, including one that was based on the premise that 911 callers used land lines and not cellphones.

A crucial issue for the inquiry has been the decision by firefighters to tell residents to remain in their apartments even as flames and smoke engulfed almost every floor. That “stay put” policy is based on a notion that buildings are designed in compartments and that fires can usually be contained in one area, making it safer for people to stay where they are.

The report, by retired judge Sir Martin Moore-Bick, said the policy had become far too rigid at the London Fire Brigade. The concept “had become an article of faith within the LFB, so powerful that to depart from it was to all intents and purposes unthinkable.”

Sir Martin said firefighters should have realized within a half-hour that an evacuation was necessary given how quickly the fire spread. Instead, he said firefighters didn’t withdraw the advice for another hour when it was too late. He called on the LFB to develop a strategy to evacuate high-rise towers and he urged the government to come up with national guidelines to ensure fire routes within buildings were protected.

The report also took issue with Fire Commissioner Dany Cotton, who told the inquiry: “It’s all very well saying ‘Get everybody out,’ but then how do you get them all out?” Sir Martin said her very question illustrated that the LFB had never considered the issue. And he said the Commissioner’s suggestion to the inquiry “that she would not change anything about the response of the LFB” was an indication the service was “at risk of not learning the lessons" of the fire.

Commissioner Cotton said Wednesday that the LFB would study the report and “take every action we can to improve public safety." She added that the brigade was “disappointed at some of the criticism of individual staff members.” And she dodged calls to resign. “It’s important for me that I continue to protect the people of London by putting those steps in place and developing LFB and by resigning now that would not happen.”

That did little to ease the anger of those who lost family members in the fire. “Her position is untenable,” Natasha Elcock, the chairwoman of Grenfell United, told a news conference on Wednesday. “She is the Commissioner, she is in charge and she didn’t make sure her team were trained.”

Nazanin Aghlani, who lost two family members in the fire, said senior LFB commanders should face prosecution. Some firefighters displayed a “serious lack of common sense,” she added. "If a fire happened tonight the same thing would happen again.”

The tower is still standing in West London as a police investigation continues. And although it has been covered in white plastic, the building remains a tragic symbol to those who live next to it, like Vassiliki Stavrou, who lost several friends in the fire. “We are all waiting anxiously to find out what will come out of this report,” Ms. Stavrou said Wednesday.

The second phase of the inquiry will examine issues relating to the building, including the design of the cladding, the use of fire doors, other safety measures and the role of local authorities in refurbishing the tower. That will prove critical because Sir Martin said as many as 400 other buildings across Britain have similar cladding. 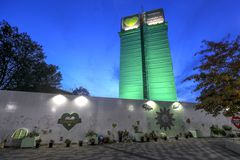 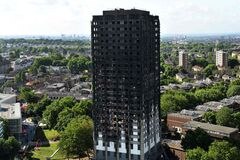 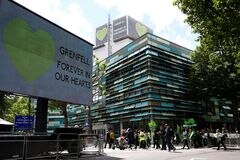