The scrawny boys were huddled on the floor of the cave when the British divers emerged from the murky water.

As his light flickered from one boy to another, one diver called out, “How many of you?”

After 10 days trapped in a flooded cave complex in northern Thailand, and after an enormous search effort that had transfixed Thailand, the missing 12 boys and their soccer coach had finally been found in Tham Luang Cave.

In a brief video filmed by another diver, which was posted on the Thai navy seal Facebook page, the boys and their coach seemed in surprisingly good condition. Some boys sat and some stood as they spoke with the diver.

Food was foremost on their minds. “Eat, eat, eat,” one of the boys can be heard saying in English.

The group had been the focus of a search-and-rescue operation ever since the boys and their coach went into the popular cave complex after soccer practice on June 23 and were caught inside by rising flood waters.

The two British divers who were first to reach the boys were John Volanthen and Rick Stanton, both experts on cave rescues, according to Bill Whitehouse, vice chairman of the British Cave Rescue Council.

The next challenge will be getting the soccer team out of the flooded cave in their weakened condition and without training as scuba divers. The boys range in age from 11 to 16, and their coach is 25.

“I’d expect these children to be physically in fairly rough shape, and psychologically terrified,” said Dr. Eric Lavonas, an emergency physician and trained diving medicine specialist from Denver Health Medical Center and a spokesman for the American College of Emergency Physicians.

The governor of Chiang Rai province, Narongsak Osottanakorn, who is overseeing the search-and-rescue operation, said a medical team would treat the team members and evaluate them to determine when they could be moved.

“I assure you we found them,” Narongsak told reporters. “After we have the doctor assess their condition, they are going to give them treatment for them to be able to move. Then we are going to decide next how to move them.”

Divers were finally able to reach the group after enlarging a narrow, submerged passageway that had been too small for them to get through while wearing air tanks.

Earlier, crews had used huge pumps to reduce the water level, and divers had placed guide ropes and air tanks along the route to reach the site of the trapped boys.

King Maha Vajiralongkorn Bodindradebayavarangkun had indicated he was following events closely, helping to focus the attention of government officials.

The boys’ first question when the divers arrived was whether they could leave right away. They also wanted to know how long they had been in the cave.

The diver explained that the cave was flooded and that it would take some time to get them out. But he assured them that other divers would soon be bringing food and supplies.

“Many people are coming,” one diver, believed to be Volanthen, said. “We are the first.”

Because the boys and their coach went to the cave after soccer practice, it is unlikely they would have had much, if any, food with them. But given how long they survived and the condition in which they were found, health experts say it is certain they had drinkable water, whether from within the cave or brought with them.

“Food is not the priority,” Lavonas said. “It’s getting them to a safe place. The human body is pretty good at dealing with short-term starvation.”

Kham Phromthep, whose 12-year-old son, Duangpetch Phromthep, was among the boys trapped in the cave, said he was ecstatic when he saw his son in the video.

“I am very happy to see his face among the other faces,” he said.

Like other relatives of the missing group, Kham has been going to the cave every day to follow the rescue operation.

He was at home Monday evening when he heard the news and hurried back to the cave on his bicycle.

“I’m very happy, very relieved,” he said. “He’s lost some weight. And he looks tired. But still, I am very happy to see him.”

Hundreds of officials from more than 20 government agencies, along with private companies, were involved in the search. Rescuers came from at least six countries, including members of the U.S. military.

“This is an absolute humongous success for Thailand,” said Capt. Jessica Tait, spokeswoman for a U.S. Air Force team assisting in the operation.

Searchers had believed the boys and their coach would go to a large cavern known as Pattaya Beach, which they thought would be dry and have more air than other parts of the cave.

But Pattaya Beach was flooded, too, and the group went another quarter-mile inside the cave complex to another chamber, said Narongsak, the governor.

The group was found about 3 miles from the cave entrance.

Officials had been trying numerous approaches to reach the boys, including trying to find other entry points into the 7-mile-long cave complex and possibly drilling through the mountaintop into the roof of the cavern where the group was believed to be.

But the most significant breakthrough came Monday when the divers, coping with mudslides and limited visibility, painstakingly enlarged the small passageway that had blocked their underwater progress.

The divers came close to reaching the group last Tuesday when the water level was lower and they were able to get around the narrow opening. But they had to make a quick retreat when the water began rising and threatened to trap them in the cave too.

Since then, heavy rains continued to flood the cave, which hindered divers’ efforts to reach the group, despite the operation to pump out the water. For several days, the water in the cave system rose faster than it could be extracted.

Ben Reymenants, the Belgian owner of a diving school in Phuket, has been helping with the rescue and said he spent eight hours in the water Monday extending the guidelines.

“It’s fantastic. It’s amazing,” he said. “But now the real work starts, how to get them out. That’s the real challenge. Of course it is fantastic news, but they are very weak.”

Of the evacuation options, drilling to reach the boys is the least viable, as getting the necessary drilling equipment to the mountain atop the cave would be daunting and the process time-consuming. Despite more than a week of searching, no other entry to the cave has been found.

“My main priority is still pumping out the water,” Narongsak said at a Tuesday morning news conference. But the water levels have proved hard to lower.

That leaves bringing the group out using scuba equipment, and even in the best circumstances, diving in caves is difficult and dangerous.

“You may have unusual current, you may have conditions which make it extremely difficult to navigate dangerous water with low visibility,” said Dean Wiseman, spokesman for the National Speleological Society and a cave explorer for about 30 years.

For boys in a weakened state, who are unlikely to have ever dived before, the evacuation will pose significant risks.

“Trying to take non-divers through a cave is one of the most dangerous situations possible, even if the dives are relatively easy,” Anmar Mirza, a leading American cave rescue expert, told The Associated Press.

But the challenges can be surmounted.

“Even if they can’t swim, a rescue diver should be able to guide them along,” Lavonas said. “The diver will have lights. Obviously, these are young boys and they’re terrified. It’s not going to be an easy rescue, but it should be OK.”

He said each rescue diver would take one child and would almost certainly use a harness to keep a grip on the child, whose regulator, a breathing device, would most likely be attached to the tank worn by the rescue diver.

One serious concern is the possibility that the boys could be at risk for decompression sickness, or the bends, if the air they have been breathing in the cave has been under pressure from the rising water.

In that case, the best solution, Lavonas said, “would be to bring a portable hyperbaric chamber to the mountainside by helicopter, or to place the children on oxygen and move them quickly to a hyperbaric chamber.”

Over the past 10 days, the rescue operation has brought Thais together in the hope that the boys and their coach would be found alive.

The king sent three kitchen trucks and staff members to help feed the search crews. He also donated 2,000 raincoats to help protect them from the heavy rains.

It was about 10:30 p.m. Monday when word reached the command centre at Tham Luang-Khun Nam Nang Non Forest Park that the boys and their coach had been found.

Some family members were waiting by themselves in a room at the park headquarters. When the news was announced, they jumped up, cheered and screamed with joy.

In the video of their discovery, the boys are alert as they talk to the divers.

“Tell him we are hungry,” one boy says in Thai. “I haven’t had anything to eat.”

They discuss what day it is, and the diver tells them that it is Monday.

Later, one of the group says that he is very happy to see the divers arrive. 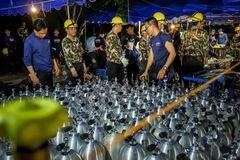 Thai prime minister to families of boys missing in cave: Have faith
June 29, 2018 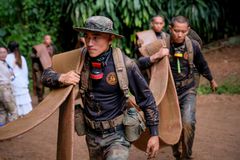 Rescuers in Thailand search for alternative entrance to cave
June 28, 2018 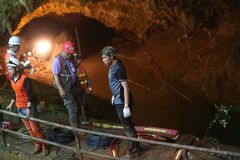