Officials investigating one of California’s largest oil spills are looking into whether a ship’s anchor may have struck a pipeline on the ocean floor, causing a major leak of crude, authorities said Monday.

The head of the company that operates the pipeline said that divers have examined more than 2,438 metres of pipe and are focusing on “one area of significant interest.”

An anchor striking the pipeline is “one of the distinct possibilities” behind the leak, Amplify Energy chief executive Martyn Willsher told a news conference.

“We’re looking into if it could have been an anchor from a ship, but that’s in the assessment phase right now,” Coast Guard Lieutenant Commander Jeannie Shaye said.

Houston-based Amplify Energy has been cited 72 times for safety and environmental violations that were severe enough that drilling had to be curtailed or stopped to fix the problem, regulatory records show.

In all, the Amplify subsidiary known as Beta Operating Co. has been cited 125 times since 1980, according to a database from the Bureau of Safety and Environmental Enforcement, the federal agency that regulates the offshore oil and gas industry. The online database provides only the total number of violations, not the details for each incident.

The company was fined a total of US$85,000 for three incidents. Two were from 2014, when a worker who was not wearing proper protective equipment was shocked with 98,000 volts of electricity, and a separate incident when crude oil was released through a boom where a safety device had been improperly bypassed.

The suspected pipeline leak sent 572,807 litres of heavy crude into the ocean waters, fouling the sands of famed Huntington Beach and other coastal communities. The spill could keep beaches closed for weeks or longer.

Environmentalists had feared the oil might devastate birds and marine life in the area. But Michael Ziccardi, a veterinarian and director of the Oiled Wildlife Care Network, said only four oily birds had been found so far. One suffered chronic injuries and had to be euthanized, he said.

“It’s much better than we had feared,” he said at a news conference Monday.

Mr. Ziccardi said he’s “cautiously optimistic,” but it’s too soon to know the extent of the spill’s effect on wildlife. In other offshore oil spills, the largest number of oiled birds have been collected two to five days after the incident, he said. 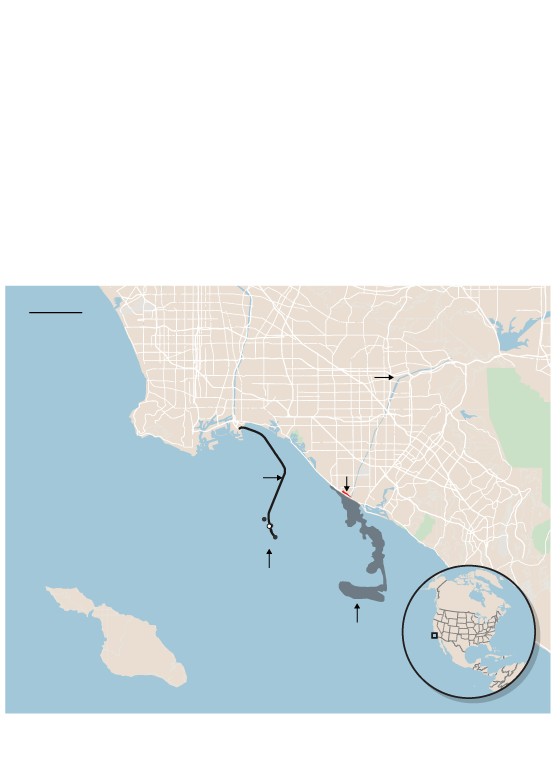 A large oil spill off the Southern California coast left

contaminated, in what local officials called an envi-

gallons, or 3,000 barrels, had spread into an oil slick

covering about 13 square miles of the Pacific Ocean

since it was first reported on Oct. 2. 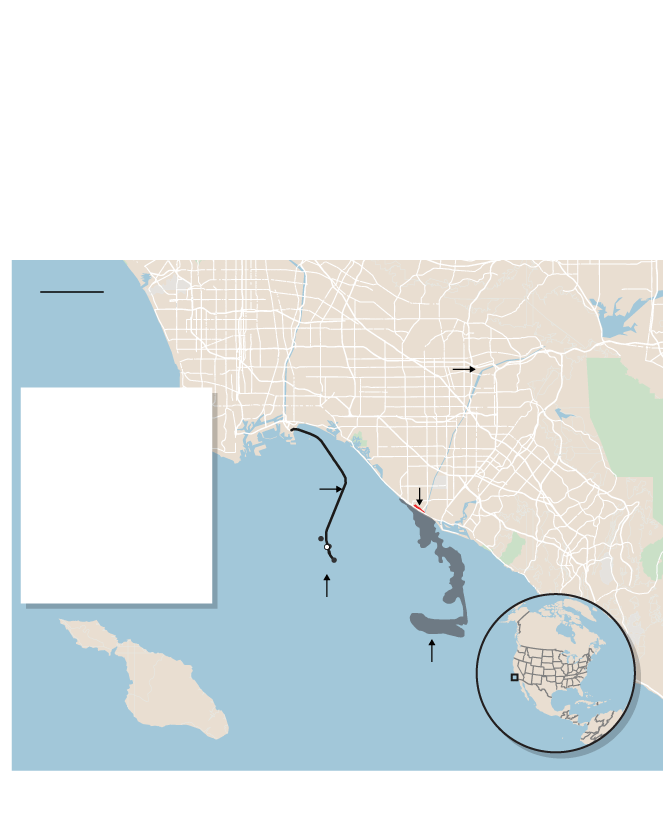 birds mired in petroleum and wetlands contaminated, in what

slick covering about 13 square miles of the Pacific Ocean since

it was first reported on Oct. 2.

caused by a breach 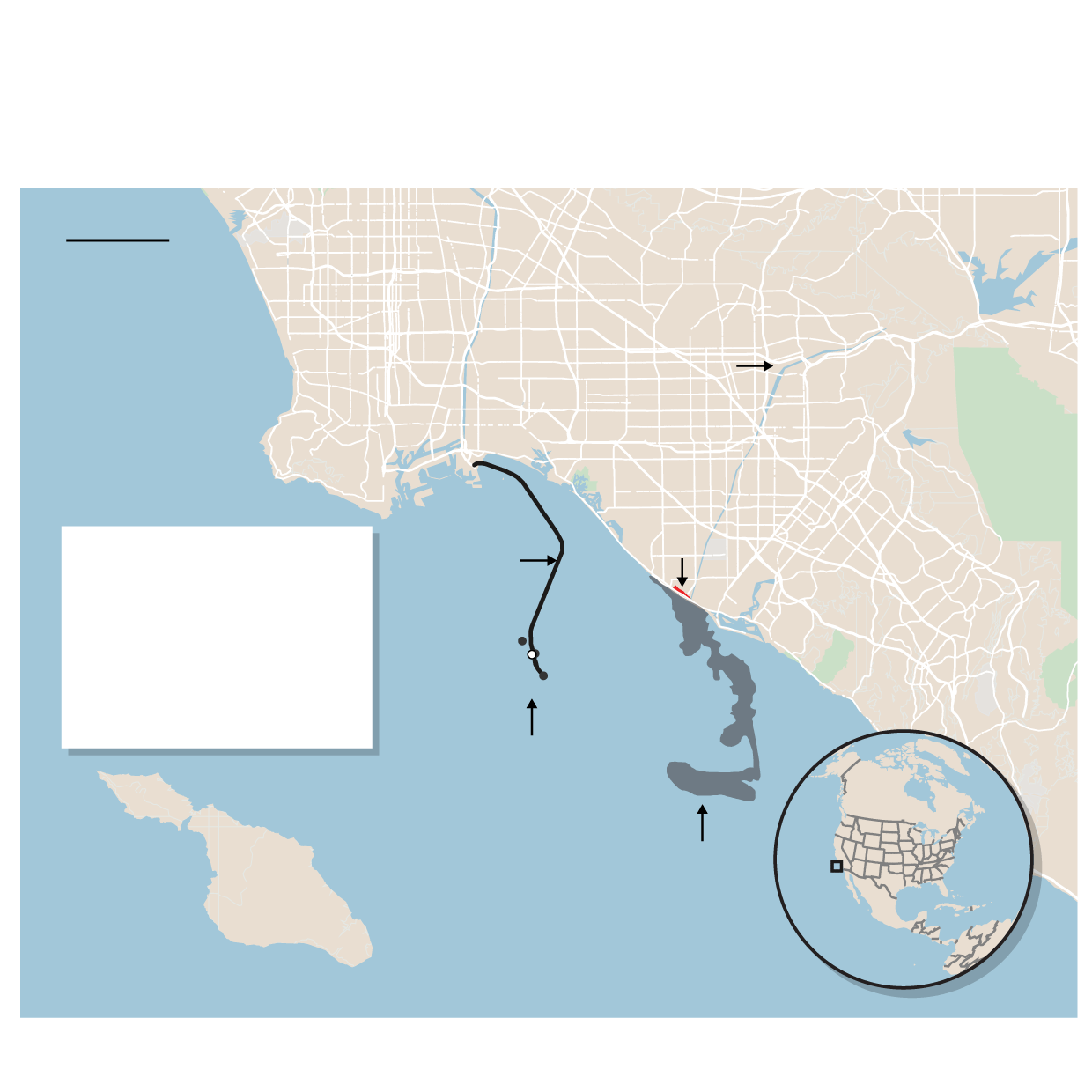 wetlands contaminated, in what local officials called an environmental catastrophe. An esti-

miles of the Pacific Ocean since it was first reported on Oct. 2.

The spill was caused by

a breach connected to

the Elly oil rig and

stretched from the Hun-

Amplify operates three oil platforms about 14.5 kilometres off the coast of California, all installed between 1980 and 1984. The company also operates a 16-inch pipeline that carries oil from a processing platform to an onshore storage facility in Long Beach. The company has said the oil appears to be coming from a rupture in that pipeline about 6.44 kms from the platform.

Before the spill, Amplify had high hopes for the Beta oil field and was pouring millions of dollars into upgrades and new “side track” projects that would tap into oil by drilling laterally.

“We have the opportunity to keep going for as long as we want,” Mr. Willsher said in an August conference call with investors. He added there was capacity “up to 20,000 barrels a day.”

Investors shared Mr. Willsher’s optimism, sending the company’s stock up more than sevenfold since the beginning of the year to US$5.75 at the close of trading on Friday. The stock plunged more than 40 per cent in morning trading Monday.

The company filed for bankruptcy in 2017 and emerged a few months later. It had been using cash generated by the Beta field and others in Oklahoma and Texas to pay down US$235-million in debt.

The White House was “monitoring the oil spill and are very engaged in it,” press secretary Jen Psaki said Monday. The Biden administration was working with state and local partners to contain the spill, assess the effects and “address potential causes.”

Some residents, business owners and environmentalists questioned whether authorities reacted quickly enough to contain the spill. People who live and work in the area said they noticed an oil sheen and a heavy petroleum smell Friday evening.

Booms were deployed on the ocean surface Sunday to try to contain the oil while divers sought to determine where and why the leak occurred. On land, there was a race to find animals harmed by the oil and to keep the spill from harming any more sensitive marshland.

But it was not until Saturday afternoon that the Coast Guard said an oil slick had been spotted and a unified command established to respond. And it took until Saturday night for the company to shut down the pipeline.

Rick Torgerson, owner of Blue Star Yacht Charter, said on Friday evening “people were e-mailing, and the neighbours were asking, ‘Do you smell that?’” By Saturday morning, boats were returning to the marina with their hulls covered in oil, he said.

Garry Brown, president of the environmental group Orange County Coastkeeper, decried a lack of initial co-ordination among the Coast Guard and local officials in dealing with the spreading oil slick.

“By the time it comes to the beach, it’s done tremendous damage. Our frustration is, it could have been averted if there was a quick response,” said Mr. Brown, who lives in Huntington Beach.

Some of the oil washed up on the shores of Orange County. The city and state beaches at Huntington Beach were closed, and late Sunday the city of Laguna Beach, just to the south, said its beaches also were closed.

Huntington Beach Mayor Kim Carr said the beaches of the community nicknamed “Surf City” could remain closed for weeks or even months. The oil created a miles-wide sheen in the ocean and washed ashore in sticky black globules.

“In a year that has been filled with incredibly challenging issues, this oil spill constitutes one of the most devastating situations that our community has dealt with in decades,” Ms. Carr said. “We are doing everything in our power to protect the health and safety of our residents, our visitors and our natural habitats.”

Mr. Willsher said the pipeline and the company’s three platforms were shut down Saturday night. The 28.16-km pipeline that is 24 to 30 metres below the surface was suctioned out so no more oil would spill while the location of the leak was being investigated.

Crews led by the Coast Guard-deployed skimmers laid some 1,128 metres of floating barriers known as booms to try to stop more oil from seeping into areas including Talbert Marsh, a 10-hectare wetland officials said.

The oil will likely continue to wash up on the shore for several days and could affect Newport Beach and other nearby communities, officials said.

The spill comes three decades after a massive oil leak hit the same stretch of Orange County coast. On Feb. 7, 1990, the oil tanker American Trader ran over its anchor off Huntington Beach, spilling nearly 1.6 million litres of crude. Fish and about 3,400 birds were killed.

The area affected by the latest spill is home to threatened and endangered species, including a plump shorebird called the snowy plover, the California least tern and humpback whales.