A dramatic escalation of the war in Ethiopia’s Tigray region, including a barrage of rocket attacks on airports in Ethiopia and neighbouring Eritrea, is fuelling international fears that the conflict is spilling across borders and igniting a broader conflagration in the Horn of Africa.

The war, which began on Nov. 4, spiralled to dangerous new levels on Saturday night when forces in the rebellious Tigray region fired missiles at Asmara, capital of Eritrea, whose soldiers have allegedly crossed the border to enter the conflict on the side of the Ethiopian government. Two of the missiles reportedly hit the Asmara airport, and Tigray officials later confirmed that they had launched the attack.

A day earlier, Tigray forces fired rockets at two airports in the neighbouring Amhara region of Ethiopia. The airports in the cities of Gondar and Bahir Dar were damaged and casualties were suffered among Ethiopian troops, according to reports from the region.

Analysts are worried that the war could draw in Middle Eastern powers, which have increasingly sought influence in North Africa and the Horn of Africa. A senior leader of the Tigray People’s Liberation Front, or TPLF, the government in Tigray region, claimed on Sunday that drones from the United Arab Emirates are supporting Ethiopia’s military offensive in the region. The UAE has a military base in Eritrea’s port of Assab.

There are also dangerous tensions between Ethiopia and Egypt over a massive Ethiopian hydroelectric dam on the Nile, and U.S. President Donald Trump warned last month that Egypt could “blow up” the dam.

The missile attack on Eritrea this weekend has led to widespread concerns that the war is escalating out of control. An earlier border conflict between Eritrea and Ethiopia, beginning in 1998, killed as many as 100,000 people and continued to erupt sporadically for two decades.

Tibor Nagy, the U.S. State Department’s top diplomat for Africa, said on Sunday that the United States “strongly condemns the TPLF’s unjustifiable attacks against Eritrea … and its efforts to internationalize the conflict in Tigray.”

U.S. Senator Chris Coons and former U.S. national security adviser Susan Rice, both of whom are reportedly candidates to become Secretary of State in the administration of president-elect Joe Biden, expressed alarm at the growing war.

In a tweet, Ms. Rice called for “fast” leadership by the State Department to defuse the conflict, while Mr. Coons said the war is a threat to millions of Ethiopians and “could have devastating humanitarian consequences in the strategically important Red Sea region.”

The conflict in Tigray has its roots in a deepening struggle between Ethiopian Prime Minister Abiy Ahmed and the defiant Tigrayan regional leaders, who had held enormous influence in the federal government for decades before Mr. Abiy took power in 2018.

Despite orders from the Abiy government, Tigray went ahead with regional elections in September and then seized control of a federal army base this month, triggering a decision by Mr. Abiy to send federal troops into the region.

Mr. Abiy, who won a Nobel Peace Prize last year for forging a peace deal with Eritrea, has described the federal military offensive as merely a “law enforcement operation” to disarm a “criminal junta.” He promised a week ago that the offensive is “rapidly” reaching its goals and “will wrap up soon.” But many analysts have predicted the war will be protracted and bloody, since the TPLF is well-armed and battle-hardened.

In a statement on Sunday, Mr. Abiy said his campaign in Tigray is “progressing well” and “will prevail.”

Tigray’s regional president, Debretsion Gebremichael, told the Associated Press on Sunday that his forces still have “several” long-range missiles and can use them “selectively, anywhere.” He alleged that 16 Eritrean military divisions have entered the conflict on the Ethiopian army’s side – a claim that Eritrea has denied.

“As long as troops are here fighting, we will take any legitimate military target and we will fire,” the Tigray leader told the AP. “We will fight them on all fronts with whatever means we have. ... We have to defend ourselves.”

Regional and ethnic conflicts have intensified in Ethiopia over the past year, leading to fears that the country could fragment. In the latest example, at least 34 people were killed in an attack on a passenger bus in western Benishangul-Gumuz region, according to a report on Sunday by the Ethiopian Human Rights Commission. It did not identify the attackers.

War in Ethiopia leaves a nation in trauma as atrocities, bomb attacks are reported
November 13, 2020 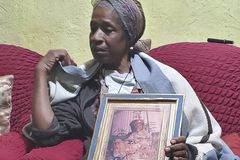 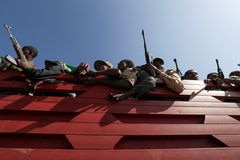 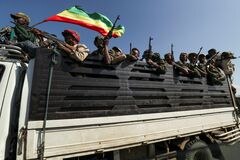