Julhas Alam
DHAKA, Bangladesh
The Associated Press
Published May 3, 2020 Updated May 4, 2020
For Subscribers

At least 29 Rohingya refugees from a fishing boat floating for weeks in the Bay of Bengal have landed on an island in southern Bangladesh, officials said Sunday.

The refugees, including 15 women and six children, landed on Bhasan Char island on Saturday and are believed to be from one of several boats stuck at sea, said Tonmoy Das, the chief local government official in Noakhali district.

Mr. Das said food, doctors and a team of 10 policemen were sent to the island to take care of the refugees.

An official from Bangladesh’s Refugee Commissioner’s office in Cox’s Bazar district said the office was aware of the development. The official spoke on condition of anonymity because he was not authorized to speak to the media.

Rights groups said recently that hundreds of Rohingya are stranded on at least two fishing trawlers between Bangladesh and Malaysia. The refugees reportedly attempted to illegally reach Malaysia, but failed because of strict patrols to keep out the coronavirus.

The United Nations, the British government and Human Rights Watch have recently urged Bangladesh to shelter all the refugees floating at sea, but the government had a lukewarm response, saying all other countries in the Bay of Bengal region should also share the responsibility of sheltering them.

Bhasan Char was previously submerged by monsoon rains but Bangladesh’s government said in January that it was ready to house up to 100,000 Rohingya refugees from the crowded and squalid camps where they’ve lived for years in Cox’s Bazar.

Bangladesh’s navy was involved with a multimillion-dollar project under which flood protection embankments, houses, hospitals and mosques have been built on the island.

But no refugees have agreed so far to move to the island, and the UN and other international agencies did not show much optimism about the relocation to the newly built island.

The UN’s refugee agency said Sunday that it was concerned about the refugees.

“The UN’s long-standing position is that comprehensive technical and protection assessments to evaluate the safety and sustainability of life on Bhasan Char are essential before any relocations to the island take place. The UN has long been prepared to proceed with on-site assessment work,” Louise Donovan, a spokeswoman for the United Nations High Commissioner for Refugees, or UNHCR, said in an e-mail.

More than 700,000 Rohingya Muslims came to Bangladesh starting in August, 2017, when the military in Buddhist-majority Myanmar began a harsh crackdown against them in response to an attack by insurgents. Global rights groups and the UN have called the campaign ethnic cleansing involving rapes, killings and torching of thousands of homes. Currently more than 1 million Rohingya live in Bangladesh.

The Rohingya are not recognized as citizens in Myanmar, rendering them stateless, and face other forms of state-sanctioned discrimination.

Bangladesh’s coast guard rescues 396 Rohingya who had been drifting at sea for weeks
Subscriber content
April 16, 2020 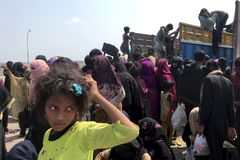 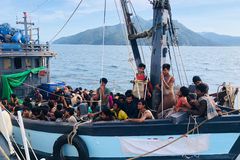 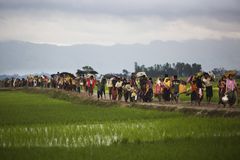