The Queen and other members of the Royal Family will wear masks during the Duke of Edinburgh’s funeral on Saturday and will not be allowed to sing hymns, Buckingham Palace officials have confirmed.

“Although plans for the funeral have been modified to take into account public health guidelines, the ceremonial aspects of the day and the funeral service itself are in line with the Duke’s wishes and will reflect His Royal Highness’s personal and military affiliations,” palace officials said in a statement Thursday.

Britain has been under tight lockdown restrictions for months, and palace officials have had to adjust the funeral arrangements to take into account the latest COVID-19 measures. While some restrictions have been lifted recently, funerals have been capped at 30 people and singing during worship services has been limited to small choirs.

The original plans for the Duke’s funeral included 800 guests. The Queen and her officials had to cut the invitees to close relatives. The guest list includes the royal couple’s four children – Princess Anne, Princes Charles, Andrew and Edward – as well Prince Harry, Prince William and other grandchildren. Those invited also include several of the Queen’s cousins and three of Prince Philip’s German relatives.

None of the Queen and the Duke’s 10 great-grandchildren will attend. The Duchess of York has also not been invited and the Duchess of Sussex, who is pregnant, has been advised not to fly in from California on medical grounds.

There had been speculation that the men would wear military uniforms, raising a potential embarrassment for the Duke of Sussex who had to give up his military roles when he and his wife, Meghan, stepped away from royal duties last year. However, the palace confirmed on Thursday that the congregation “will wear day dress or morning coat with medals.”

The funeral will be held at 3 p.m. on Saturday at St. George’s Chapel in Windsor Castle. It will be preceded by a national moment of silence.

Prince Philip’s coffin has been lying in a private chapel at Windsor since his death last Friday. On Saturday it will be transferred to the castle’s Inner Hall. “After prayers are said by the Dean of Windsor, the coffin will be carried to the state entrance by a bearer party found by the Queen’s Company, 1st Battalion Grenadier Guards,” the palace said on Thursday. “The bearer party will place His Royal Highness’s coffin on a purpose-built Land Rover” for the short trip to St. George’s Chapel.

The coffin will be followed by a ceremonial procession involving nine members of the Royal Family, including the Duke’s four children as well as Prince Harry and Prince William. The Queen will travel separately.

It’s expected that Prince Harry and Prince William will not sit together during the service because of tension within the family. They will also be separated in the procession by their cousin Peter Phillips. The funeral will be their first face-to-face meeting since Harry and Meghan’s recent interview with Oprah Winfrey, which raised allegations of racism in the Royal Household. Palace officials declined to comment on the seating arrangement and a spokesman told reporters, “The arrangements have been agreed, and they represent Her Majesty’s wishes.”

According to palace officials, the Duke’s coffin will be covered with his personal standard and dressed with a wreath of flowers. His naval cap and sword will also be laid on top. There will be eight pall bearers made up of Royal Marines and members of other regiments associated with the Duke.

During the service, congregants will sit well apart in observance of social distancing rules. A small choir of four will also sing pieces of music chosen by the Duke. “The choir will be located in the nave, away from the seated congregation, and in line with public health guidelines there will be no congregational singing,” the palace said.

The funeral service will be lead by the Dean of Windsor and it is expected to last 50 minutes. At the conclusion the Duke will be interred in the chapel’s royal vault and the Archbishop of Canterbury will say a blessing.

A national period of mourning that began last Friday will end after the funeral. However, the Queen has asked family members to observe a two-week period which will end next week. Family members are expected to carry out their engagements wearing a black armband.

On Thursday, Prince Charles and the Duchess of Cornwall viewed some of the thousands of bouquets of flowers, cards, balloons and messages of condolence that had been placed outside Buckingham Palace. The collection has been moved to Marlborough House, the headquarters of the Commonwealth Secretariat and Commonwealth Foundation.

The funeral service at St. George’s Chapel will take place before a congregation of 30, as follows: 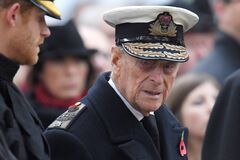 Philip’s death leaves ‘huge void’ but the end was ‘peaceful ... so gentle,’ members of the Royal Family say
April 11, 2021
Private funeral for Prince Philip to be held at Windsor Castle April 17
April 10, 2021