On Monday, Mr. Putin arranged a summit in Moscow that brought together the two sides in the war, which has pitted General Khalifa Haftar, leader of the eastern-based Libyan National Army, against the United Nations-backed government in Tripoli, led by Fayez al-Sarraj.

The two men were to attend the short meeting, a prelude to a weekend conference in Berlin, to forge a lasting peace agreement and set a timetable for national elections.

Late in the day, various reports said Mr. al-Sarraj had endorsed the ceasefire but that Gen. Haftar did not meet with him and asked for more time to consider the truce. “Today we can report that some progress was made,” Russian Foreign Affairs Minister Sergey Lavrov told reporters.

Italy and France have fumbled efforts to bring the warring factions together and end a civil war that has raged virtually non-stop since 2011, when the Arab Spring spread from Tunisia to Libya and ended the regime of strongman Moammar Gadhafi. The fighting intensified last April, when Gen. Haftar’s forces swept westward in a failed bid to take Tripoli.

Lack of direction from the UN and Washington widened the diplomatic hole.

In a tweet, Emadeddin Badi, a scholar at the Middle East Institute in Washington and a fellow at the European University Institute in Florence, said the “facts of the matter are Turkey and Russia jointly called for a ceasefire – which worked. … This after 10 months of EU/U.S. idly watching Libya. … Humiliating is an understatement.”

The ceasefire came into force on Sunday, opening the door to a diplomatic initiative that may bring the country together so it can begin reconstruction, develop its oil and gas industry – Libya is home to Africa’s biggest known oil reserves – and put an end to the human trafficking from Libyan shores that has sent thousands of migrants to their deaths in the Mediterranean.

The Russian and Turkish seizure of the Libyan file in part parallels the campaign by Russia, Turkey and Iran to dominate the scene in Syria, pushing the United States, the EU and the UN to the side. Under President Donald Trump, the U.S. seems to be disengaging from the Middle East, even as it puts enormous pressure on Iran to remove its proxies from Iraq. Last week, a U.S. drone strike killed Iran’s top general, Qassem Soleimani, bringing the two countries to the brink of war.

The U.S. has shown little interest in untangling the mess in Libya. The State Department has no presidential special envoy to Libya and, unlike Turkey and Italy, maintains its Libyan embassy in Tunis, the Tunisian capital, not in Tripoli. “Libya is the Americans’ overlooked crisis. Trump thinks Libya was Hillary Clinton’s mess,” said a diplomat whose identity The Globe and Mail is keeping confidential.

In a joint statement on Monday, the Libyan embassies of the U.S., Italy, France, Germany and others said they welcomed the ceasefire. “We urge the parties to seize this fragile opportunity to address the key political, economic and security issues underlaying the conflict,” they said. “In the spirit of the upcoming Berlin conference, we remain committed to the sovereignty and territorial integrity of Libya, free from undue external interferences.”

The opportunistic rush to take the lead in Libya has been backed with firepower. Russian mercenaries with the privately owned Wagner Group have been fighting Gen. Haftar’s ragtag militias near Tripoli. Turkey has supplied weapons, including drones, to the government and recently sent troops to the capital. Syrian mercenaries on the Turkish payroll were reportedly ready for combat.

The Russian and Turkish geopolitical manoeuvrings in Libya have delivered the biggest blows to Italy and France. Italy backs the government in Tripoli, but France has given some support to Gen. Haftar, who also has the support of Egypt, Saudi Arabia and the United Arab Emirates.

Italy was Libya’s colonial master until the end of the Second World War and has been its biggest foreign investor since then. Eni, the Italian national oil company, pumped more than 300,000 barrels a day in Libya in 2018 and operates a natural gas pipeline between Libya and Sicily. France’s Total, one of the world’s biggest oil companies, is also a top producer there and is keen to expand its operations.

Turkey has a lot to gain by saving the official government and pushing it into a peace agreement with Gen. Haftar and his allies. In November, Ankara and Tripoli signed a maritime border agreement that, if it sticks, would give Turkey a big say in the exploration of the hydrocarbon-rich eastern Mediterranean. Greece calls the deal an intrusion on sovereignty and has threatened to take Turkey to the International Court of Justice in the Hague.

On Saturday, German Chancellor Angela Merkel announced the plans for the Libyan peace summit in Berlin. Tentatively set for Jan. 19, its representatives would include the five permanent representatives of the UN Security Council plus Italy, Germany, Egypt and the United Arab Emirates.

Truce holds in Libya despite reports of violations by both sides
Subscriber content
January 12, 2020 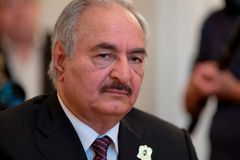 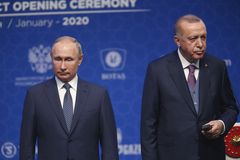 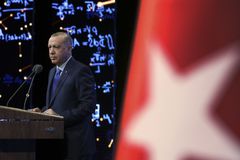