Russia’s top opposition figure was fighting for his life on Thursday, after an apparent poisoning that his allies immediately blamed on the Kremlin.

Alexey Navalny, the loudest and most persistent critic of Russian President Vladimir Putin, and one who had refused to be chased into exile, collapsed while flying home to Moscow from a tour of Siberia to support anti-Kremlin candidates ahead of local elections next month.

In a video posted to social media by passengers on the same plane, the 44-year-old Mr. Navalny can be heard howling in pain from inside the airplane bathroom. Other videos, taken after the plane makes an emergency landing in the city of Omsk, show a seemingly unconscious Mr. Navalny being lifted onto a stretcher, and then into a waiting ambulance.

By evening local time, he was in a coma and breathing with the support of a ventilator. The German charity, Cinema For Peace, said Thursday that it was sending an air ambulance to Omsk to bring Mr. Navalny to Berlin’s specialist Charité hospital, where Russian-Canadian activist Pyotr Verzilov was treated following his own suspected poisoning in 2018.

“We suspect Alexey was poisoned with something mixed into his tea. It was the only thing he drank all morning,” Mr. Navalny’s spokeswoman Kira Yarmysh, who was travelling with him at the time of the incident, wrote on Twitter. “Doctors said that the toxin was absorbed more quickly through hot liquid.”

Mr. Navalny’s allies quickly interpreted the incident as an attack on his life. “Why is it the opposition always ends up in intensive care?” political activist Ilya Yashin wrote on his own Twitter account.

Mr. Yashin was alluding to the long list of Putin critics who have died or fallen seriously ill since he took power more than 20 years ago. Poison is a frequent tool: journalist Anna Politkovskaya fell seriously ill under remarkably similar circumstances – after drinking tea on an internal Russian flight – in 2004. She survived, but was shot dead two years later.

Other poisoning victims include former Ukrainian president Viktor Yushchenko, whose face was disfigured by mysterious dioxins in 2004 and ex-KGB agent Alexander Litvinenko, who died after drinking tea laced with radioactive polonium in 2006.

Earlier in 2018, Sergei Skripal, another former KGB agent, survived an assassination attempt in which the assailants used the nerve agent Novichok in the English city of Salisbury. A British woman died coming into contact with trace elements of the nerve agent three months later.

“It’s like a horrible Groundhog Day,” Vladimir Kara-Murza, an opposition politician who was hospitalized twice after poisonings in 2015 and 2017, told The Globe and Mail. “Poisoning gives the Kremlin plausible deniability, they can say they had nothing to with it – but somehow we have a whole slate of Kremlin critics who have had this happen to them.”

Kremlin spokesman Dmitry Peskov said Mr. Putin was aware of Mr. Navalny’s hospitalization, and the reports that he had been poisoned. “Doctors are doing everything that needs to be done, the best doctors in Omsk are engaged,” Mr. Peskov said. “We certainly wish a speedy recovery to him, like to any other citizen of our country.”

However, the scene at the Omsk hospital, where police quickly filled the hallway outside Mr. Navalny’s room and prevented even his wife Yulia Navalnaya, who flew in from Moscow, from seeing him, added to the sinister atmosphere around the incident.

“No one is allowed to see Alexey Navalny, medical records are not shown. His condition is grave,” said Anastasy Vasilyeva, Mr. Navalny’s personal doctor, who flew to Omsk along with Ms. Navalnaya. Dr. Vasilyeva said she had officially asked the Kremlin to help evacuate Mr. Navalny to a specialist poison-treatment centre in Europe.

However, Anatoly Kalinichenko, one of the doctors at the Omsk hospital, told Reuters that it wasn’t clear that Mr. Navalny had been intentionally poisoned. Dr. Kalinichenko said tests were continuing, and that “natural poisoning” was one of several possible diagnoses.

Mr. Putin wasn’t Mr. Navalny’s only enemy. The lawyer-turned-political force first rose to prominence a decade ago by blogging about corruption in and around the Kremlin, famously labelling Mr. Putin’s United Russia movement “the party of crooks and thieves.” That effort grew into the Anti-Corruption Foundation, a team of young activists who scour government contracts and other open-source information, linking suspicious business deals to real estate, yachts and business jets owned by Russia’s business and political elite.

While other Russian opposition figures have gone into exile under pressure from the Kremlin, Mr. Navalny remained, enduring repeated arrests and physical attacks. That persistence, combined with his ability to mobilize large crowds of supporters onto the streets of Moscow and other cities, has made him perhaps the single biggest threat to Mr. Putin’s grip on power.

He was apparently poisoned at a time when the Kremlin is nervously eyeing a popular uprising in neighbouring Belarus in which hundreds of thousands of people took to the streets to protest against election fraud. The demonstrations threaten to end the 26-year rule of strongman Alexander Lukashenko, an ally of Moscow who has appealed to Russia for help “ensuring security” in Belarus.

Mr. Navalny’s Siberia trip was intended to mobilize voters around a slate of anti-Kremlin politicians that he was supporting in local elections there. “If you want to be like Belarus,” he wrote Tuesday on his blog, “here is your list of candidates.”

Mikhail Khodorkovsky, an opposition businessman who now lives in London after serving a 10-year jail sentence linked to his opposition to Mr. Putin, predicted that Mr. Navalny’s attack was linked to whatever the Kremlin planned to do next in Belarus.

Mr. Kara-Murza, who moved to the United States after the second poisoning incident, said the focus today should be on saving Mr. Navalny’s life. Afterwards, Mr. Kara-Murza said, the international community would need to raise its collective voice.

Several European countries released statements of concern about Mr. Navalny’s suspected poisoning on Thursday, and both German Chancellor Angela Merkel and French President Emmanuel Macron said their countries would be willing to give the Russian opposition leader medical treatment. U.S. President Donald Trump said his administration was “looking at” the reports about Mr. Navalny.

“It’s time to call things what they are,” Mr. Kara-Murza said. “The people who did this to him and to so many other people should be held accountable. The propagandists who cover for them should be held responsible. This impunity is not going to last forever.” 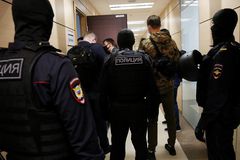 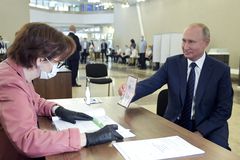