A major wildfire threatened thousands of homes and the Ronald Reagan Presidential Library near Los Angeles on Wednesday as the fiercest Santa Ana winds yet lashed Southern California, forcing meteorologists to create new alert levels to warn of the danger.

The blaze erupted early on Wednesday morning in Simi Valley, northwest of Los Angeles in Ventura County, and by nightfall had charred 526 hectaresas crews fought to protect the Reagan library and some 7,000 homes in the path of the flames.

The Easy Fire, which forced 26,000 people to flee, broke out some 48 km from a separate conflagration burning in shrub-covered hills near the Getty Center museum that has displaced thousands of residents from some of the city’s most affluent neighborhoods.

The Getty museum houses a collection that includes paintings by Van Gogh, Rembrandt and Manet, ancient Greek statues and an expansive array of manuscripts.

The Reagan Library, Getty Center and Getty Villa in Malibu were all forced to close due to the flames and thick clouds of smoke, although all three facilities were said to be out of imminent danger by evening.

“The dedication of our staff and the professionalism of our region’s first responders has been nothing short of heroic,” Getty president Jim Cuno said in a statement posted on the center’s website.

The Santa Ana winds were blamed for a string of fire outbreaks across Southern California.

Weather conditions were at their worst, with fierce winds hurling burning embers through the air across bone-dry brush to ignite spot fires.

’THE FIRE OUTFLANKED US’

“The fire outflanked us very rapidly today, pushed by those 40- to 50-mile-per-hour (40- to 80 km per hour) winds,” Ventura County Fire Department assistant chief Chad Cook told reporters. “We did experience gusts up to 65 miles per hour (105 kph) this morning, which made long-range spotting very, very dangerous.”

The National Weather Service issued an unprecedented “extreme red flag” warning for wildfires in Los Angeles and Ventura counties ahead of two days of intense, dry wind gusts that were forecast to reach near-hurricane force.

“I don’t know if I’ve ever seen us use this warning,” forecaster Marc Chenard said. “It’s pretty bad.”

Power was cut off to nearly 400,000 homes and businesses statewide on Wednesday as a precaution by the state’s largest utility, Pacific Gas and Electric Co, a unit of PG&E Corp , and other utilities.

The so-called Easy fire in Simi Valley broke out just before dawn off a road named Easy Street, sending a wall of flames racing across scrub-covered slopes at the edge of the hilltop Reagan Library, which houses the late president’s archives and memorabilia.

Pre-positioned strike teams of firefighters, backed by water-dropping helicopters and airplane tankers dumping payloads of fire retardant, swarmed the area as flames closed in on the library campus.

“We’re surrounded. It’s a scary situation. But I’m sure they’ll get on top of it,” John Heubusch, the library’s executive director, said in an interview with KNX radio in Los Angeles during the firefight. “It’s as close as it gets.”

By late morning, emergency crews had largely subdued flames, and the fire moved off in other directions.

The blaze prompted public schools and at least five college campuses in the area to cancel classes for the day. Health authorities were handing out disposable air filter masks to members of the public at five cites around the county.

On nearby ranches, residents in the protective face masks scrambled to coax nervous horses and other livestock into trailers to drive them to safety.

The Santa Ana winds are a regional weather phenomenon that sends gusts westward off the desert to the east, through mountain passes toward the coast. They were forecast to reach sustained speeds of 50 to 70 mph 80 to 110 kphon Wednesday and Thursday.

Investigators say the Getty fire was likely caused by a broken tree branch blown into power lines during high winds on Monday morning. It spread, consuming 300 hectaresby Wednesday morning, with about a quarter contained by firefighters. At least 12 homes have been destroyed.

In northern California, firefighters struggled for a sixth day against the 30,760-hectareKincade fire in Sonoma County’s wine country. That blaze has destroyed at least 189 homes and other structures but was listed as 30 percent contained on Wednesday.

PG&E acknowledged last week that the Kincade fire started near a damaged transmission tower at about the time a live high-voltage line on that tower malfunctioned.

The company filed for bankruptcy in January, citing $30-billion in potential liability from a series of deadly fires sparked by its equipment in 2017 and 2018.

As many as 190,000 people were displaced at the height of the Kincade fire, but some evacuations have since been lifted.

Explainer
Wildfires and blackouts in California: The situation so far
October 31, 2019 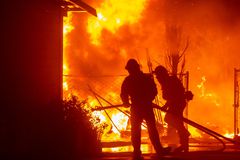 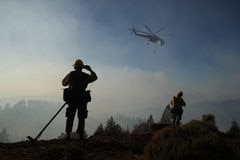