Saudi Arabia said on Monday that two of its oil tankers were among those attacked off the coast of the United Arab Emirates and described it as an attempt to undermine the security of crude supplies amid tensions between the United States and Iran.

The UAE said on Sunday that four commercial vessels were sabotaged near Fujairah emirate, one of the world’s largest bunkering hubs lying just outside the Strait of Hormuz. It did not describe the nature of the attack or say who was behind it.

The owner of the Norwegian vessel, Thome Ship Management, said the vessel was “struck by an unknown object.” Footage seen by Reuters showed a hole in the hull at the waterline with the metal torn open inwards.

Iran, which is embroiled in an escalating war of words with the United States over sanctions and the U.S. military presence in the region, moved to distance itself on Monday.

Iran’s Foreign Ministry called the incidents “worrisome and dreadful” and called for an investigation.

A senior Iranian lawmaker said “saboteurs from a third country” could be behind it, after saying on Sunday the incident showed the security of Gulf states was fragile.

The United States has limited information about who may have been responsible for the attacks, said a U.S. official familiar with American intelligence on the incident and who spoke on condition of anonymity.

U.S. Secretary of State Mike Pompeo shared information on “escalating” threats from Iran during meetings with EU counterparts and the head of NATO in Brussels, the U.S. special representative for Iran Brian Hook told reporters.

Hook declined to say whether he believed Iran played a role or if Pompeo blamed Iran. He said the UAE had requested U.S. help in the investigation and Washington was very glad to provide this.

The U.S. Maritime Administration said in an advisory on Sunday that incidents off Fujairah, one of the seven emirates that make up the UAE, had not been confirmed and urged caution.

The Maritime Administration had said earlier this month that U.S. commercial ships including oil tankers sailing through Middle East waterways could be targeted by Iran in one of the threats to U.S. interests posed by Tehran.

Ahead of his talks with Pompeo in Brussels, Britain’s Foreign Minister Jeremy Hunt warned of the risks of “a conflict happening by accident” with an unintended escalation between Washington and Tehran over an unravelling nuclear deal.

Washington withdrew last year from a 2015 pact between Iran and global powers aimed at reining in Tehran’s nuclear plans. Since then, the United States has ratcheted up sanctions on Iran, saying it wanted to reduce its oil exports to zero.

U.S. President Donald Trump wants to force Tehran to agree a broader arms control accord and has sent an aircraft carrier and B-52 bombers to the Gulf in a show of force against what U.S. officials have said are threats to U.S. troops in the region.

Trump warned on Monday Iran would “suffer greatly” if it targeted U.S. interests.

Tehran has called the U.S. military presence “a target” rather than a threat and has said it will not allow its oil exports to be halted.

A fifth of global oil consumption passes through the Strait of Hormuz from Middle East crude producers to major markets in Asia, Europe, North America and beyond. The narrow waterway separates Iran from the Arabian Peninsula.

Iran’s Revolutionary Guards, designated a terrorist organization by Washington, threatened last month to close the choke point if Tehran was barred from using it.

Oil prices rose more than $1 a barrel on Monday but then fell with Wall Street as the negative turn in U.S.-Chinese trade talks spooked investors. Brent futures closed down 39 cents at $70.23 a barrel.

Saudi Energy Minister Khalid al-Falih said one of the two Saudi vessels was attacked in the UAE economic zone on its way to be loaded with Saudi crude from Ras Tanura port for delivery to state-owned Aramco’s customers in the United States.

The attack did not cause an oil spill but there was significant damage to the vessels’ structures, he said.

Sunni Muslim allies Saudi Arabia and the UAE have backed U.S. sanctions against Shi’ite Iran, a fellow OPEC producer but regional foe. After the United States ended sanctions waivers that had allowed some nations to continue importing Iranian crude, Washington said Riyadh and Abu Dhabi would help compensate for any shortage in oil supply.

Falih said the attack aimed to undermine maritime freedom and the security of oil supplies.

“The international community has a joint responsibility to protect the safety of maritime navigation and the security of oil tankers, to mitigate against the adverse consequences of such incidents on energy markets and the danger they pose to the global economy,” he said. 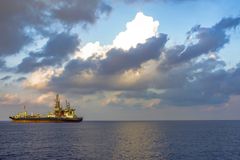