A senior Saudi official Wednesday urged more than one million Muslims intending to perform the hajj to delay making plans this year – comments suggesting the pilgrimage could be cancelled owing to the new coronavirus pandemic.

In February, the kingdom took the extraordinary decision to close off the holy cities of Mecca and Medina to foreigners over the virus, a step that wasn’t taken even during the 1918 flu epidemic that killed tens of millions worldwide.

Restrictions have tightened in the kingdom as it grapples with more than 1,700 confirmed cases of the new virus. The kingdom has reported 16 deaths so far.

The Middle East has more than 75,000 confirmed cases of the virus, most of those in Iran, and more than 3,400 deaths. Iran’s health ministry spokesman, Kianoush Jahanpour, said Wednesday that the virus had killed another 138 people, pushing the country’s death toll to 3,036 amid 47,593 confirmed cases.

“The kingdom of Saudi Arabia is prepared to secure the safety of all Muslims and nationals,” Saudi Hajj and Umrah Minister Muhammad Saleh bin Taher Banten told state television. “That’s why we have requested from all Muslims around the world to hold onto signing any agreements [with tour operators] until we have a clear vision.”

He spoke as the sound of crickets echoed in the background late Tuesday night at the Grand Mosque of Mecca, which normally draws thousands of worshippers throughout the day and night, circling it and praying toward it.

Saudi Arabia has barred people from entering or exiting three major cities, including Mecca and Medina, and imposed a nighttime curfew across the country. Like other countries around the world and in the Middle East, the kingdom also suspended all inbound and outbound commercial flights.

Each year, up to two million Muslims perform the hajj, a physically demanding and often costly pilgrimage that draws the faithful from around the world. The hajj, required of all able-bodied Muslims to perform once in their lifetime, is seen as a chance to wipe clean past sins and bring about greater humility and unity among Muslims.

Standing in Mecca in front of the cube-shaped Kaaba that Muslims pray toward five times daily, Mr. Banten also said the kingdom was already providing care for 1,200 pilgrims stuck in the holy city owing to global travel restrictions. A number of them are being quarantined in hotels in Mecca, he said.

The state-run Saudi Press Agency cited Banten’s remarks in stories early Wednesday, saying that Muslims should “be patient” in making their plans for the hajj. The pilgrimage was expected to begin in late July this year.

The kingdom’s Al Saud ruling family stakes its legitimacy in this oil-rich country on overseeing and protecting the hajj sites. Saudi King Salman, whose country is presiding over the Group of 20 countries this year, has said his government will cover the costs treatment of all coronavirus patients in the country, including visitors, foreign residents and those residing illegally.

Meanwhile, Iranian President Hassan Rouhani again slammed the U.S. sanctions on his country Wednesday. He said now would have been “the best time” for the Trump administration to ease sanctions on Iran, reeling from the region’s worst outbreaks of the virus.

“It was the best historical opportunity for America,” Mr. Rouhani said in remarks at the weekly Cabinet meeting. “They [the United States] could have apologized. This was a human issue and no one would criticize them for backing off."

U.S. President Donald Trump withdrew the U.S. from Iran’s 2015 nuclear agreement with world powers and reimposed sweeping sanctions. The U.S. has offered humanitarian aid to Iran but authorities in Tehran have refused.

Iran has been urging the international community to lift sanctions, and is seeking a US$5-billion loan from the International Monetary Fund for the first time in decades.

In Israel, which has detected 5,591 cases and is under near lockdown, Israeli Prime Minister Benjamin Netanyahu announced further containment measures to curb the spread of the virus.

In a televised address, he said police would tightly restrict entry and exit from the Tel Aviv suburb of Bnei Brak, an ultra-Orthodox city that has been especially hard hit by the virus outbreak. Many in Israel’s insular ultra-Orthodox communities have defied bans on public gatherings, fuelling tension with authorities. Mr. Netanyahu also ordered citizens to wear masks when going out in public.

Next week’s Passover holiday, usually a time for large family gatherings, must be celebrated only at home with immediate family, he added. 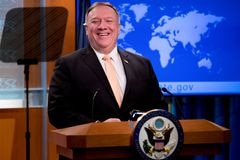 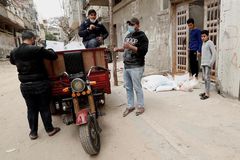 With millions living in war zones and few resources, the coronavirus is a catastrophe in the making
March 31, 2020 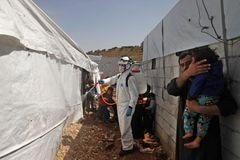