The race to secure scarce supplies of COVID-19 vaccines has pitted Britain against the European Union and raised fears that growing vaccine nationalism could affect other countries, including Canada.

The EU has been battling AstraZeneca over a shortage of the company’s COVID-19 vaccine, and this week officials told the drug giant to make up for the shortfall by diverting shipments destined for Britain. That prompted a sharp retort from the British government, which has insisted that AstraZeneca must honour its contractual obligations to the United Kingdom before any vials are rerouted to Europe.

“I think we need to make sure that the vaccine supply that has been bought and paid for, procured for those in the U.K., is delivered,” Michael Gove, Minister for the Cabinet Office, told a London radio station Thursday.

The dispute illustrates the rising tension over the short supply of COVID-19 vaccines and the intense pressure governments are under to roll out vaccination programs. It has also highlighted concerns that wealthy countries will hoard supplies. “As we speak, rich countries are rolling out vaccines, while the world’s least-developed countries watch and wait,” WHO director-general Tedros Adhanom Ghebreyesus said in a speech this week. “With every day that passes, the divide grows larger between the world’s haves and have-nots.”

The EU has already faced criticism over its sluggish vaccination program and delays in securing supply contracts. While the U.K. has inoculated 11 per cent of its population, EU member states have averaged about 2 per cent. On Thursday, vaccination centres in France, Spain and Germany began cancelling appointments for shots because of the AstraZeneca supply problems.

The EU has bet heavily on the AstraZeneca vaccine, which was developed in conjunction with Oxford University, ordering as many as 400 million doses. Unlike the vaccines by Moderna and Pfizer-BioNTech, which the EU has been using until now, AstraZeneca’s does not have to be kept frozen and thus is easier to transport, store and administer. Regulators are set to approve its use Friday, and officials were expecting 80 million doses by the end of March. Last week AstraZeneca said it could only deliver 31 million by then.

The company’s chief executive, Pascal Soriot, has blamed the problems on reduced yields at a plant in Belgium. The manufacturing process involves growing cells that are infected with a genetically modified version of a virus commonly found in chimpanzees. Those cells are a key ingredient in the vaccine, which mimics the virus that causes COVID-19 and triggers the body’s immune system. Growing the cells can take up to three weeks, and any reduction in yields can cause delays.

The problems at the Belgian plant have affected shipments to the EU and not the U.K. because AstraZeneca has developed supply lines for each customer. The EU is supplied from manufacturing sites in Belgium and three other European locations. Britain’s supply comes from two plants in the U.K. Canada has ordered 20 million doses of the AstraZeneca vaccine, which has yet to be approved by Health Canada, and Prime Minister Justin Trudeau has said the doses will not come from Europe.

Mr. Soriot added that Britain put in an order for 100 million doses last June, three months earlier than the EU. “So with the U.K. we have had an extra three months to fix all the glitches we experienced,” he told reporters this week. “As you could imagine, the U.K. government said the supply coming out of the U.K. supply chain would go for the U.K. first. Basically, that’s how it is.”

That’s not how EU officials see the issue. “We reject the logic of first come, first served. That may work at the neighbourhood butcher’s, but not in contracts,” said a statement from Stella Kyriakides, the EU Commissioner for Health and Food Safety.

She added that AstraZeneca’s contract with the EU stipulated that it could provide doses from the British factories, and officials have demanded it do so. EU health officials have also asked Belgian authorities to inspect the AstraZeneca plant and investigate the production issues.

Both sides have been meeting to resolve the dispute, but in the meantime, the EU is planning to exert more controls over vaccine exports from the bloc, which could restrict global supplies further.

The dispute took another turn Thursday when German health officials said the AstraZeneca vaccine should not be administered to people over the age of 65. “There are currently insufficient data available to assess the vaccine efficacy from 65 years of age,” the country’s vaccine committee said.

Mr. Soriot said researchers at Oxford conducted the trials and did not want to test the vaccine on older volunteers until they were sure it worked on 18-to-55-year-olds. “Other companies took this risk, went ahead and vaccinated older people faster or earlier,” he said. As a result, Oxford started vaccinating older people later in the trials and there were fewer participants. However, he added, that trial data showed the vaccine was effective among all age groups.

British regulators approved the vaccine in December and did not put an age limit on its use. “There is limited information available on efficacy in participants aged 65 or over, although there is nothing to suggest lack of protection,” the Medicines and Healthcare products Regulatory Agency concluded. 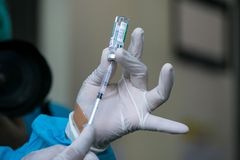 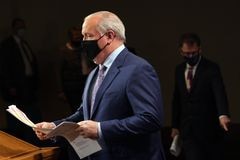